Trinamool's Jorasanko MLA Vivek Gupta decries “personal attack” on wife Ruchika, who is the second person linked to the party to win the top prize in a lottery run by the Nagaland government. 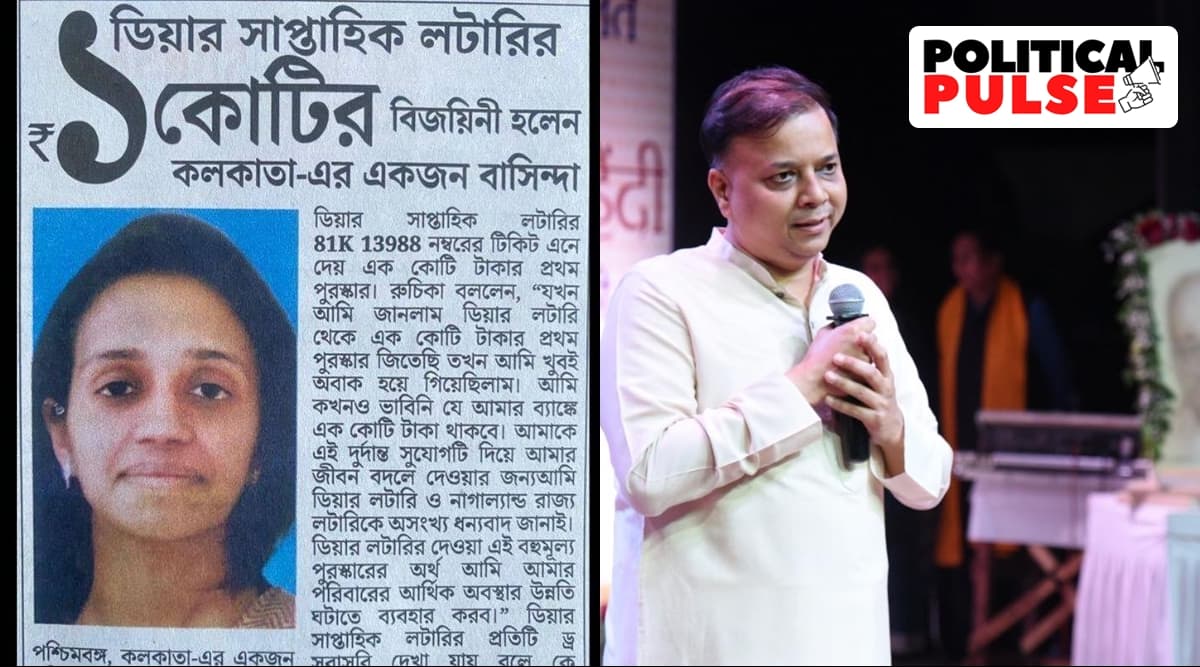 A Rs 1-crore lottery prize won by a Trinamool Congress (TMC) MLA’s wife has sparked a new political row in West Bengal, with the Opposition levelling accusations of money laundering against the ruling party. She is the second person linked to the TMC to win the top prize in the lottery in as many years. The TMC has dismissed the allegations and hit back at the BJP.

Jorasanko MLA Vivek Gupta’s wife Ruchika on August 31 won the first prize in a lottery run by the Nagaland government. The “DEAR Government Lotteries” run in Sikkim, Nagaland, and West Bengal. The news of Ruchika’s win came to light after West Bengal’s Leader of the Opposition Suvendu Adhikari on Thursday tweeted about it and took a dig at TMC MP Abhishek Banerjee, who is Chief Minister Mamata Banerjee’s nephew (or “bhaipo” in Bengali).

“I have been saying this all along that Dear (Bhaipo) Lottery and TMC have a tangled relationship. It’s an easy way to launder money. Common people buy tickets but TMC leaders win bumper prizes. First Anubrata Mondal won the jackpot and now TMC MLA Vivek Gupta’s wife has won one crore.”

The BJP leader also posted a letter he wrote to Union Home Minister Amit Shah on November 8, 2021, long before the news of Ruchika’s win surfaced.

The “DEAR Government Lotteries” company recently announced the names of winners in a newspaper advertisement. According to it, Ruchika Gupta bought ticket number “81K 13988” from the company and won the first prize. In the advertisement, Ruchika was quoted as saying that she was surprised to know she had won and had never imagined she would have Rs 1 crore in her bank account. She also thanked the Nagaland government and Dear Government Lotteries and claimed that she would use the money to improve her family’s financial status.

“The poor people of West Bengal are being lured by the prospect of winning easy money and are becoming addicted while the lucky winners seem to be the lottery company and TMC leaders,” Adhikari told the media.

In December 2021, the TMC’s Birbhum district president Anubrata Mondal won Rs 1-crore cash in the same lottery. At the time, after his pictures of winning the top prize surfaced on social media, Mondal refused to speak to reporters. He is currently in jail custody in a cattle smuggling case.

Calling on central agencies to investigate Ruchika’s win, state BJP president Sukanta Majumdar said, “It is the Bhaipo lottery, not DEAR lottery. Let the ED (Enforcement Directorate) investigate and find out how many people are involved in it. If central agencies investigate, the real culprits will be exposed.”

MLA Vivek Gupta labelled the BJP’s comments a “personal attack”. The ED has contacted the legislator and is soon likely to question him. Said Gupta, “It is shameful to target a private citizen. Her crime is she bought a lottery ticket and the second crime is being declared a winner. If this is a crime, then one lakh people have done this crime and action should be taken against all of them. The ED contacted me and I welcomed them. The Supreme Court and the government have given them power, so they can.”

According to the website of the Nagaland State Lottery Organisation, the results are declared daily at 1 pm, 6 pm and 8 pm. The name and picture of the winner are published on the website thrice daily.

A TMC leader said, “Anyone can buy a lottery ticket legally. Now, if any agency is suspicious that through lottery black money has been converted into white then they are free to investigate. The agency can serve them a notice. Moreover, Ruchika Gupta is not a TMC leader. If agencies have suspicions about a money trail, they can probe the matter.”

TMC spokesperson Kunal Ghosh questioned the Centre for allowing lotteries to be run and said if there was anything illegal the government should ban lotteries.

Sources said the lottery company and its winners were on the ED’s radar. However, no case has been registered yet. The investigative agency has time and again probed money laundering allegations against several TMC leaders, including in ongoing inquiries in cases of alleged coal pilferage case and cattle smuggling.