Narendra Modi meets President to stake claim for govt formation; swearing-in on May 26

Modi will meet President Pranab Mukherjee after his election in the first formal step before his swearing-in. 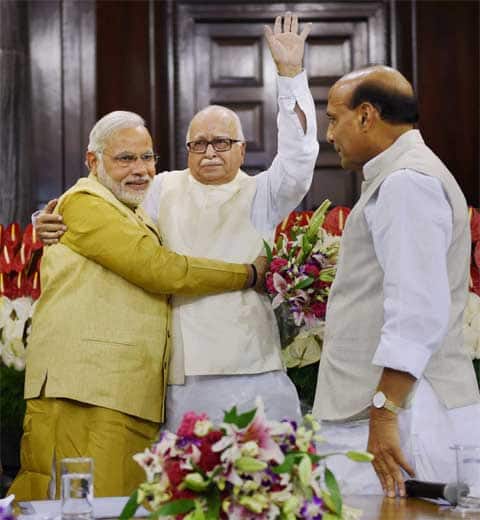 1.55 pm: Even though BJP got majority on its own, NDA allies will be as important as they would have been without clear majority, says Modi.

1.25 pm: NDA board meeting to elect Narendra Modi as leader of alliance begins.

1.03 pm: I am not doing any favour, only performing a duty; this victory is a result of struggle of five generations: Modi. 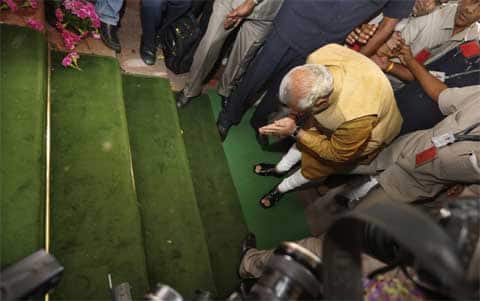 12.52 pm: I don’t believe UPA government did nothing; they did whatever they could and they deserve appreciation for whatever good they did, says Modi. 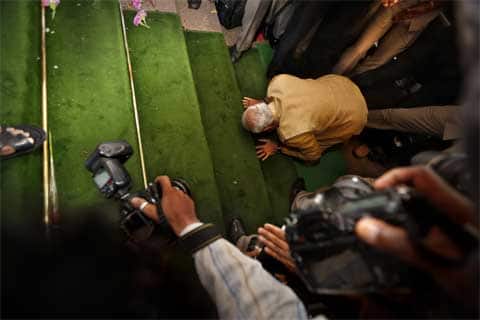 12. 48 pm: There is a new hope among people that this dispensation can fulfill their aspirations: Modi.

12.45 pm: After being elected as leader of BJP Parliamentary Party, Narendra Modi says he will work for country and not post. 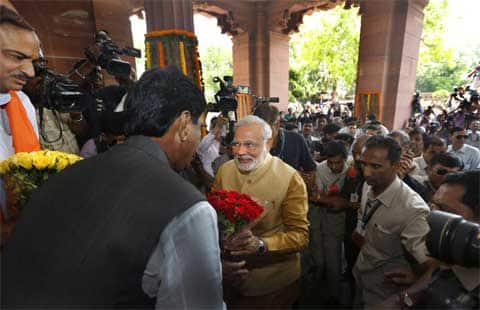 12.42 pm: We are not here for any positions but for a responsiblity: Modi.

12.40 pm: On September 13 I was chosen PM candidate by party and I started on my campaign work from the 15th as a ‘karyakarta’: Modi.

12.38 pm: Modi addresses newly-elected BJP MPs; thanks Advani and Rajnath for their blessings.

12.30 pm: Emotional Advani weeps as he praises Modi, says: “I am an emotional man. When I greeted Modi, I got tears in my eyes.” 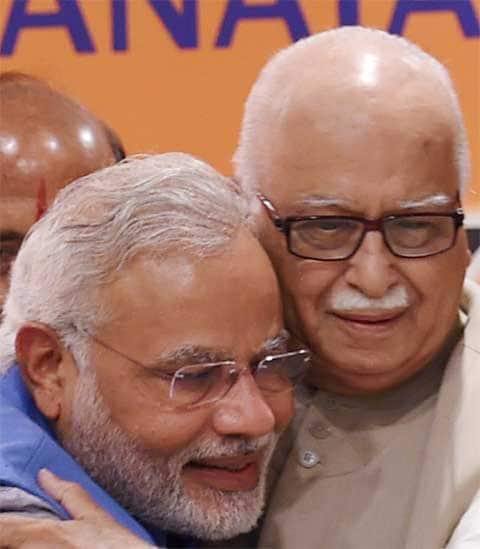 12.01 pm: Rajnath Singh says,”it is a historic moment for the BJP and in the history of Indian politics.”

11.50 am: Prime Minister-designate Narendra Modi reaches Parliament, set to be elected as the leader of BJP Parliamentary party. 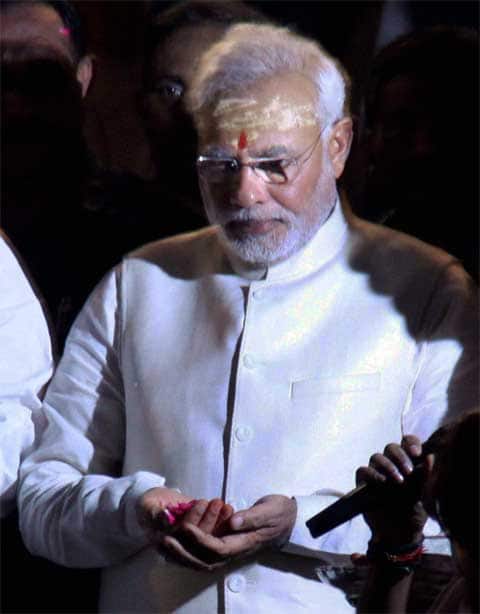 11.30 am: BJP MPs start arriving in Parliament ahead of the meeting; Modi to reach shortly.

FROM THE PRINT: ROLE REVERSAL

Their roles have now changed. Former Union home secretary R K Singh who won the Lok Sabha election from Bihar on a BJP ticket, visited RSS office at Keshav Kunj in Delhi and met Indresh Kumar among others. It is obvious that he wants his name recommended for a berth in the next government. Interestingly, he as the home secretary was monitoring the terror cases linked to the saffron brigade and in which Indresh Kumar was under scanner.

11.01 am: L K Advani to propose Narendra Modi’s name for leader of the BJP Parliamentary Party.

Ahead of being called to form the government by the President, Narendra Modi is all set to be elected as leader of the BJP Parliamentary Party and the NDA grouping on Tuesday.

Modi will meet President Pranab Mukherjee on Tuesday after his election in the first formal step before he is sworn in as Prime Minister probably by the weekend.

The BJP Parliamentary party will meet today at the Central Hall of Parliament House to formally elect Shri @narendramodi as its leader.

In our conversation, @BarackObama & I talked about further strengthening India-USA strategic partnership that will help both nations.