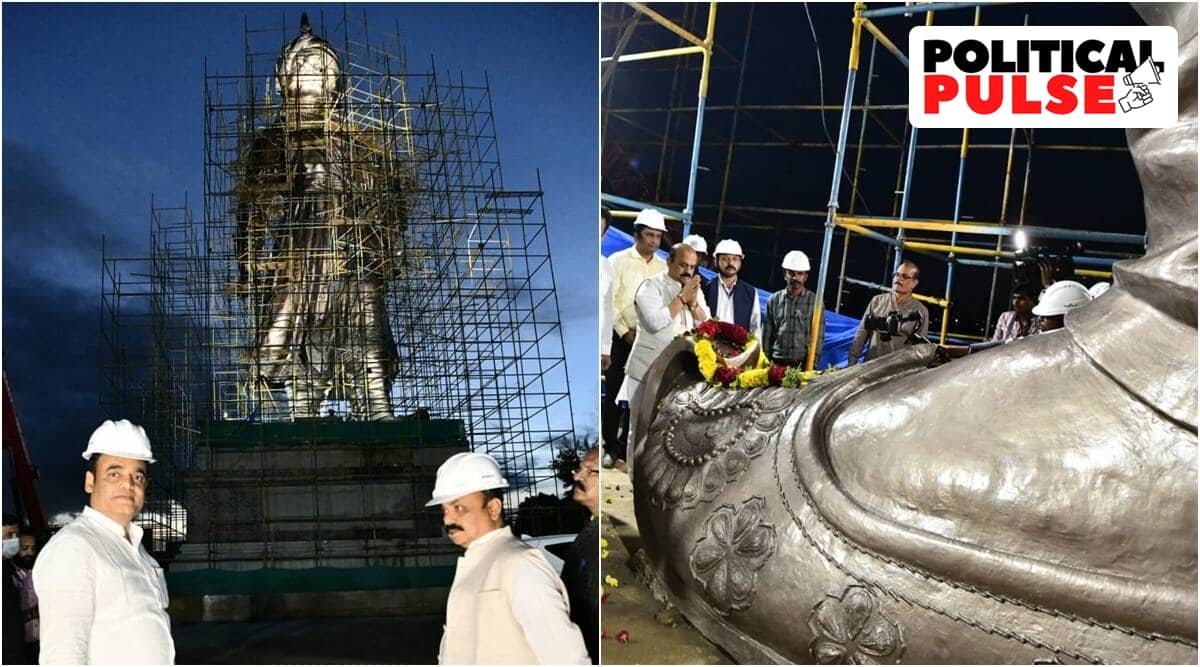 Karnataka CM Basavaraj Bommai at the site of the Kempegowda statue in Bengaluru. (Twitter/CM of Karnataka)

In an effort to counter reports of one-upmanship around the unveiling of a statue of Nadaprabhu Kempegowda, the founder of Bengaluru, causing discontent among ministers from the Vokkaliga community in the BJP government in Karnataka, three senior Vokkaliga ministers held a meeting with district officials on Tuesday.

The 108 feet statue of Kempegowda — an icon of the Vokkaliga community — is slated to be unveiled by Prime Minister Narendra Modi at the Kempegowda International Airport in Bengaluru on November 11.

The plan to build the 108-ft bronze statue of Kempegowda at the Bengaluru airport was announced by Yediyurappa in 2019. The Rs 100 crore project is widely seen as a BJP attempt to gain leverage with the Vokkaliga community, which has shown little inclination to support the saffron party in Assembly polls.

Explained |Who was Nadaprabhu Kempegowda?

Over the last few weeks, as the countdown for the unveiling has begun, the BJP’s minister for higher education, IT/BT, Dr C N Ashwath Narayan — who is the vice-chairperson of the Kempegowda Heritage Area Development Authority — has stolen a march for the unveiling, by inviting senior leaders of the Vokkaliga community like former PM H D Deve Gowda, former CM S M Krishna and the head pontiff of the main Vokkaliga mutt Nirmalananda Swami.

The minister’s attempt to project himself as the foremost leader of the Vokkaliga community has not gone down well with other Vokkaliga BJP ministers like the revenue minister R Ashok, the co-operatives minister S T Somashekhar, health minister K Sudhakar and youth empowerment minister K C Narayana Gowda, according to government sources.

The Vokkaliga ministers in the BJP, at a recent meeting on the statue project, asked CM Basavraj Bommai to allot responsibility to other senior leaders as well.

On Tuesday, Ashok, who is the senior-most Vokkaliga leader in the BJP, chaired a meeting held by Ashwath Narayan for the district-level arrangement for the Kempegowda statue unveiling — including the collection of soil from each of the districts for the “Statue of Prosperity”. The meeting was also attended by two other Vokkaliga ministers Narayana Gowda and Somashekhar.

“It (unveiling of the statue) is a government programme, our revenue minister (R Ashok) has stated. Such a programme has not been held in the past in the state. The name “Statue of Prosperity” is being given to the statue of Kempegowda. It is a big message for the entire world, the country, and the state,” Dr Ashwath Narayan said at the meeting.

“We are reiterating our strength in the state very strongly through this programme. Soil collection is a very important programme. The final message we are sending is to build the state and fulfill the dreams of Kempegowda. It is very inclusive,” he said.

“It will conclude on November 11 with the unveiling of the statue of Kempegowda by the PM. It is a government programme,” the minister reiterated.

The BJP in Karnataka at present lacks a leader of the stature of Deve Gowda, Krishna and former CM H D Kumaraswamy from the Vokkaliga community — which makes up nearly 15 per cent of the state’s population and is the dominant community in southern Karnataka.

While ministers like Ashok and Dr Ashwath Narayan have been promoted from within the BJP to take on the likes of Kumaraswamy of the JDS and D K Shivakumar of the Congress, the BJP leaders are yet to assert themselves.

Since the BJP came to power in 2019, the party leadership has attempted to promote Dr Ashwath Narayan as its Vokkaliga face. The higher education minister was one of three deputy CMs appointed to assist chief minister B S Yediyurappa between 2019-2021.

Dr Ashwath Narayan has, in fact, attempted to deviate from the practice of other BJP Vokkaliga leaders of not taking on community leaders in other parties, and has been involved in verbal clashes with Kumaraswamy, and nearly came to blows with Congress MP D K Suresh, the younger brother of Karnataka Congress chief D K Shivakumar, in the Ramanagara region.

Ashwath Narayan is incidentally the BJP minister who is in charge of the Ramanagara district in south Karnataka, which is also the home turf of Kumaraswamy and the D K brothers.

While Karnataka CM Basavaraj Bommai is the official minister-in-charge of the Bengaluru city region, the de-facto Bengaluru minister is Ashok, considered to be his close ally.

Dr Ashwath Narayan is also known to be keen to handle the Bengaluru city portfolio, but has not been able to displace Ashok, who earlier enjoyed the confidence of the former CM Yediyurappa and is now closely associated with Bommai.

Advertisement
Must Read |As Battle Karnataka heats up, BJP Jana Sankalpa rallies give a hint of its war plan

In the run-up to the unveiling of the Kempegowda statue, Dr Ashwath Narayan has garnered accolades from the BJP central leadership for making the project a reality.

The BJP has never been able to win a clear majority of 113 seats in the 224-member Karnataka Legislative Assembly — on account of its lack of political traction in southern Karnataka and the Vokkaliga heartland in particular. The party sensed an opportunity to make inroads after the 2019 Lok Sabha polls, in which it virtually swept Karnataka — including the southern districts of the state.

The waning of the fortunes of Devegowda’s JDS, with which the Vokkaliga community has firmly allied in the past, has also given the BJP new hope.

Incidentally, the birth anniversary of Kempegowda was declared a celebration in 2017 by the Congress government led by then chief minister Siddaramaiah — at the instance of the Vokkaliga Congress leader and current KPCC president D K Shivakumar.

US vows full military defence of allies against North Korea