With BJP rise, abrogation of Art 370 fuelling the sentiment, Hari Singh seen as “victim of discrimination of Kashmir-centric administration”, his role as “patriot”, “reformer” forgotten. 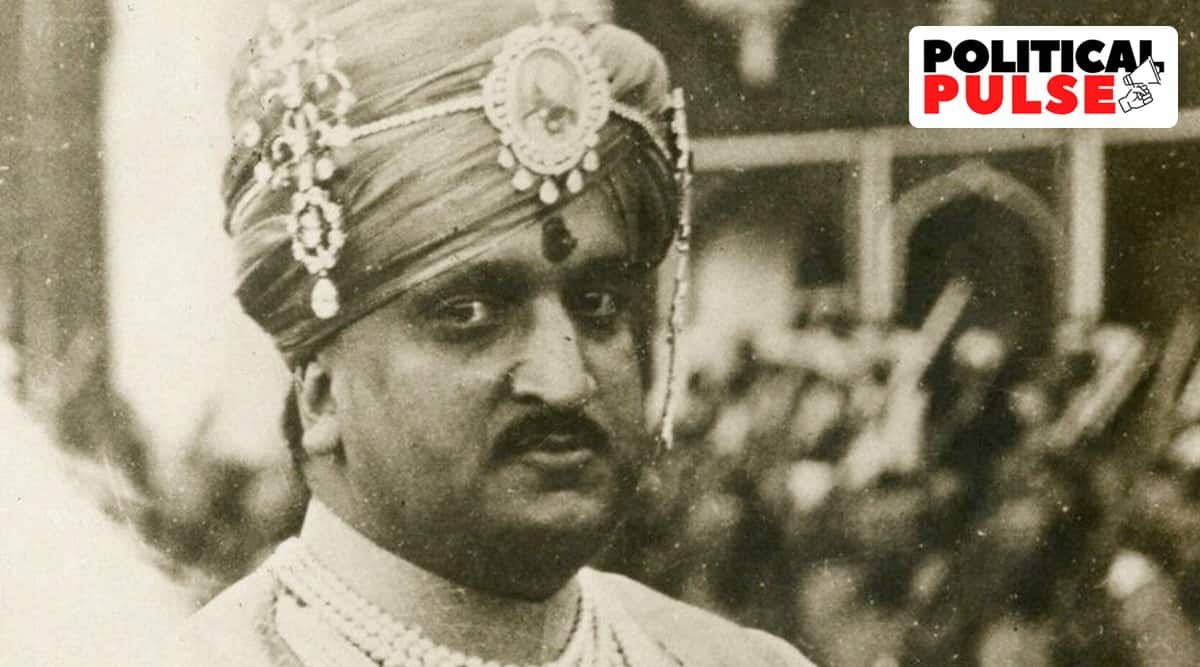 Under the rule of Maharaja Hari Singh. primary education was made compulsory, child marriage prohibited, all places of worship opened to Dalits, and hospitals were constructed and free medical treatment provided to the poor.

The fresh controversy over the role of Maharaja Hari Singh in the accession of the princely state to India flows from attempts to establish the last ruler of Jammu and Kashmir as an icon, particularly in the Jammu region, generously helped along by the rise of the BJP and its politics of Hindu pride.

In the latest instance, Union minister Kiren Rijiju stirred the pot by claiming that Hari Singh had wanted to accede to India long before October 1947 – when an invasion from Pakistan finally led to a hastened signing – and that Prime Minister Jawaharlal Nehru due to his bias towards Kashmir and Sheikh Abdullah delayed it.

An opinion piece by Hari Singh’s son Karan Singh saying he had never come across anything that suggested the Maharaja wanted to accede before Independence, was in turn publicly countered by fellow Congress leader Jairam Ramesh. The Congress communications in-charge accused Karan Singh of not defending Nehru.

Under the BJP’s rising influence in Jammu region – the party won all its 25 seats in the 2014 Assembly election (of the total 87) from here – the last Dogra ruler has been seeing a gradual revival. Hari Singh now has two public holidays associated with his name. The first one was declared on October 26, 2019, as part of Accession Day celebrations (months after the Modi government scrapped J&K’s special status), and the second one this year, to mark his birth anniversary on September 23.

Simultaneously, the J&K administration dropped Martyrs’ Day and the birth anniversary of National Conference founder Sheikh Abdullah from its list of gazetted holidays.

For Kashmir, where the Dogra ruler, who remained the titular Maharaja until 1952, when monarchy in the state was abolished, is seen as more a feudal lord, the message coming from the Centre is clear. Martyrs’ Day was observed in the memory of those killed in Kashmir when the soldiers of Hari Singh opened fire on July 12, 1931, at protesters demanding the release of a person held for a speech against the Maharaja.

But for many in Jammu, especially the younger generation that remembers the Maharaja more as “a victim of the politics of discrimination by a Kashmir-centric administration”, this was a fitting tribute.

While the BJP has been smart in tapping into that sentiment, with Hari Singh suiting its largely Jammu-centric politics, there are many reasons that the ruler needs to be celebrated, as per historians. And on that aspect, no party with a standing in Jammu – including the Congress and NC – disagrees.

He was the first ruler of a princely state in British India who, after ascending the throne in February 1926, conducted elections and formed a 75-member Praja Sabha to rule the state with laws implemented under the Ranbir Penal Code (RPC). The Praja Sabha, which had 33 elected and 14 nominated members among others, saw three elections. Hari Singh, along with his Law and Revenue Minister Sir Lal Gopal Mukherjee, a retired Allahabad High Court judge, also framed a written Constitution for J&K.

Under his rule, primary education was made compulsory, child marriage prohibited, all places of worship opened to Dalits, and hospitals were constructed and free medical treatment provided to the poor. He was also the first to commit, at the round table conference of rulers of the Indian princely states held in London in 1930, to join the All India Federation, and pleaded for equal status for Indians in the British Commonwealth nations.

Jammu has lacked an icon that can match the stature of Hari Singh since the death of Pandit Prem Nath Dorga on March 21, 1972. Commonly referred to as Sher-e-Duggar, Dogra was instrumental in the formation of the Jammu Praja Parishad Party in 1947 along with Balraj Madhok, a Bharatiya Jana Sangh leader, to oppose the “secessionist’’ policies of Sheikh Abdullah and seeking total integration of J&K with India. The Praja Parishad merged with the Jana Sangh in 1964.

The abrogation of Article 370, ending the special status of J&K that was largely a Kashmir demand, and the recent delimitation have put Jammu on an equal pedestal as far as the power dynamics in the UT go. With 47 Assembly seats now in Kashmir and 43 in Jammu, no party can come to power without taking the Jammu division along. Political leaders give the example of even the National Conference invoking the Maharaja in Jammu division. NC founder Sheikh Abdullah is blamed for the banishment of Hari Singh from J&K; he died in Mumbai, while still in exile.

A former member of the State Public Service Commission, K B Jandial, said the BJP was set to reap political benefits from steps to honour Hari Singh. However, he said, there may be no impact in Kashmir, where the withdrawal of Martyrs’ Day and Sheikh Abdullah’s birthday as gazetted holidays did not register any reaction.

BJP J&K president Ravinder Raina said there were no two ways that Hari Singh was a “national hero” and “true patriot”, with “a long association with the RSS and Jana Sangh (now, the BJP)”. However, he lamented, the Maharaja had become a victim of the politics of the Congress and NC governments, at the Centre and in J&K, respectively. “There has always been popular public sentiment in favour of the Maharaja for his contributions to the country and the state,” Raina said.

He also repeated that the accession of J&K to India could not take place by Independence “as Nehru wanted the Maharaja to first leave the state, so that he could appoint his friend Sheikh Mohammad Abdullah as interim administrator”.

While Congress chief spokesperson Ravinder Sharma too described Hari Singh a “patriot”, “far-sighted visionary”, and “nationalist who was for Independence”, he said the Maharaja’s letter of October 1947 to Lord Mountbatten indicated that he tried first for an independent state of J&K.

In the letter, which was cited by Karan Singh in his article in The Hindustan Times, Hari Singh wrote: “I… wanted to take time to (decide) which Dominion (of India and Pakistan) I should accede to, or whether it is not in the best interest of both the Dominions and of my State to stand independent, of course with friendly and cordial relations with both’’.

Sharma said the letter showed that the Dogra ruler had approached both India and Pakistan to enter a “standstill agreement” with his state.While the Pakistan government accepted the agreement, Sharma said, India desired further discussion.

Stressing that this showed that one could not claim by any stretch of the imagination that the Maharaja had offered to accede to India, for which the last date fixed earlier was August 15, 1947, Sharma said it finally happened at Nehru’s initiative.

NC provincial president Rattan Lal Gupta agreed with the Congress view, saying that while his party too saw Hari Singh as “a patriot who supported India’s freedom”, the Maharaja had wanted J&K to remain independent. It is a historical fact that he acceded after the Pakistan attack, as he needed India’s military help, the NC leader said.

Nick Jonas’s ex-girlfriend Olivia Culpo reveals she wanted to marry him, says she was left with no ‘identity’ after break-up