NC-BJP-Cong: The blurred lines in Kargil Hill Council come to a head

The CEO’s notice states that keeping in view the political developments in LAHDC, Kargil, “it would not be appropriate to go ahead with the General Council Meeting till position of all the Hon’ble Councilors is cleared with regard to their support to the present dispensation. 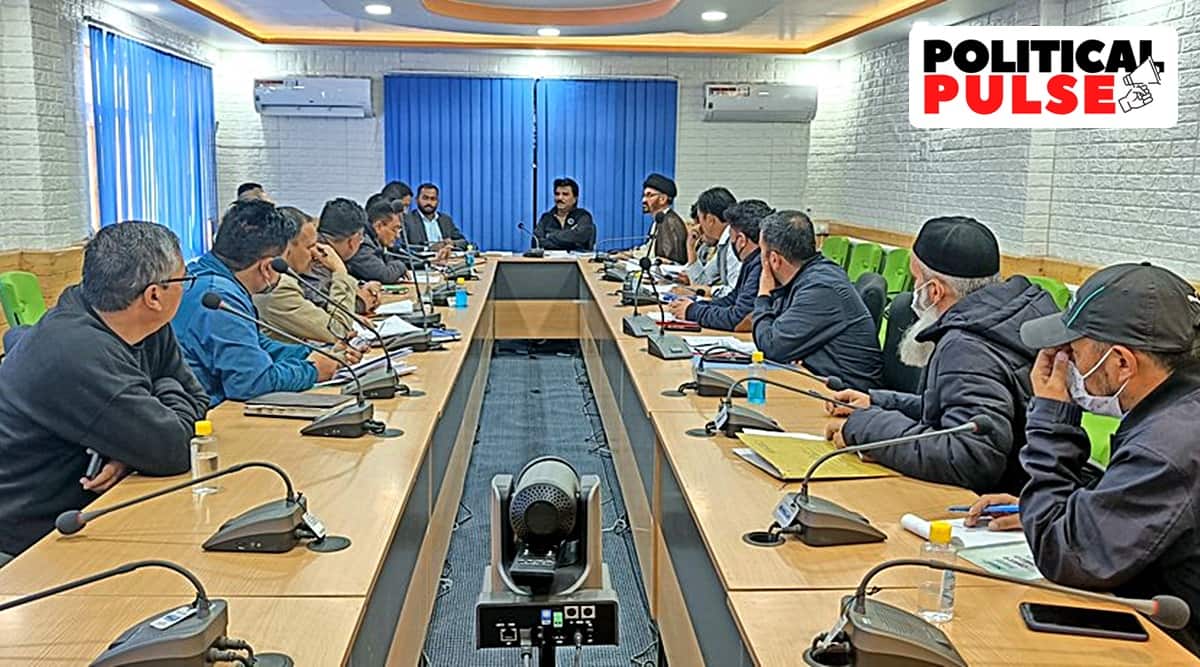 Four years after Kargil’s Ladakh Autonomous Hill Development Council (LAHDC) was elected, the Congress and the BJP have moved a notice to withdraw support to the ruling National Conference.

Following the 2018 elections to the Council, out of the 26 directly elected members to the LAHDC, Kargil, the BJP had one member. The party now has seven members (3 elected directly), including four nominated by the Lieutenant Governor.

At the time, the Congress had eight elected members in the 30-member council, and the NC had 10. There were also five independents and two members of the PDP.

The Council was first formed with the Congress supporting NC, and the members unanimously electing the latter’s Feroz Ahmad Khan as Chairman.

However, after differences over MP candidates in the 2019 general elections, the Congress stepped back but did not officially withdraw support to the Council. The two PDP members defected to the BJP and remained part of the ruling dispensation with the NC. For a while, the NC-BJP combine ran the Hill Council.

Subsequently, with the four nominated members, who have voting rights, the BJPs numbers increased in the Council. However, barring one BJP member — Mohsin Ali, who serves as one of four Executive Councillors — the six BJP and eight Congress members have “withdrawn support” to the sitting dispensation in Kargil.

Ali is also vice-president of the Kargil unit of the BJP.

On Saturday, Deputy Commissioner and Chief Executive Officer Santosh Sukhadeve, postponed the General Body Meeting of the Council till further notice citing a letter from six BJP and six Congress members withdrawing support for the National Conference. As per Nasir Munshi, head of the Kargil unit of the Congress, the two members who could not sign the letter were out of station but “we have their support in moving this motion.”

Munshi said that because Khan was unanimously elected Chairman and Chief Executive Councillor, “he has continued to presume Congress support and we want to formally withdraw it.” The BJP has had differences over NC’s functioning in the Council and questioned its policy and approach.

Section 27, Clause 2 of the Ladakh Autonomous Hill Development Council Act, 1997 states that “The Chairman may be removed from office by a resolution carried by a majority of the total number of members at a special meeting of the council called for the purpose upon a requisition made in writing by not less than one-third of such members of the Council.”

While the BJP and Congress together claim 14 members out of 30-member Council, chairman Feroz Ahmad Khan has claimed the support of 16 members.

The CEO’s notice states that keeping in view the political developments in LAHDC, Kargil, “it would not be appropriate to go ahead with the General Council Meeting till position of all the Hon’ble Councilors is cleared with regard to their support to the present dispensation. Therefore, in view of the above and keeping in view the unprecedented situation, the General Council Meeting is hereby postponed till further notice.”

The term of the current Council runs out in August 2023.

Man threatened, extorted after he contacts ‘escort service’ in Mumbai