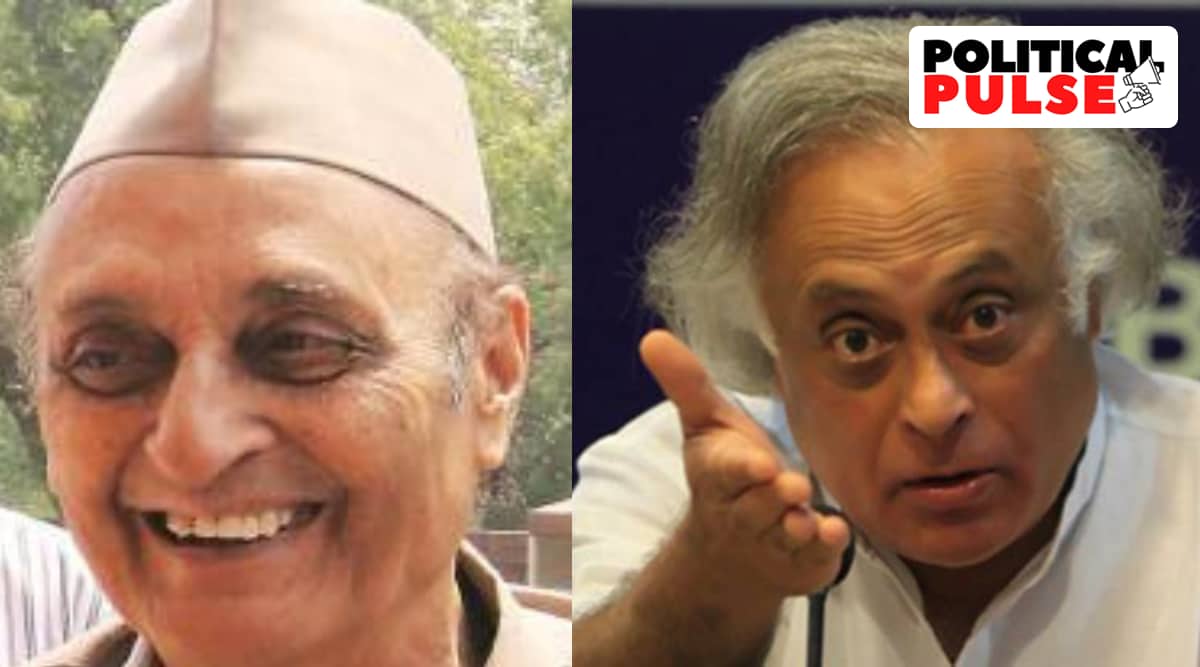 A day after he came under attack from Congress general secretary in-charge of communications Jairam Ramesh over an opinion piece on the circumstances leading to Jammu and Kashmir’s accession to India, former Union minister Karan Singh Friday hit back, accusing Ramesh of making “unacceptable” comments based on an “evidently selective” reading of history.

In a statement, the veteran Congress leader, whose ties with the party have come under a strain in recent years, underlined that he was one of the last living eyewitnesses to the events preceding and following the signing of the Instrument of Accession with India by his father Maharaja Hari Singh.

Must Read |What role exactly did Nehru play in the accession of Kashmir to India?

“I notice that the irrepressible Jairam Ramesh has thought it fit to make a statement on my article in The Hindustan Times yesterday (November 3). He has made two points, both of which are unacceptable… I would have hoped that my views (were) taken in the spirit in which I wrote them, rather than become a subject of snide remarks,” Singh said in his statement.

In the article, Singh had written that he was seeking to “clarify the unseemly controversies that seem to have emerged” about Maharaja Hari Singh’s role on the signing of the Instrument of Accession following a piece authored by Union Law Minister Kiren Rijiju.

In his piece on “Five Nehruvian Blunders on Kashmir”, which was published by News18 portal, Rijiju alleged that India’s first Prime Minister Jawaharlal Nehru, “in order to fulfil his personal agenda”, created problems on the matter of J&K’s accession. Rijiju also claimed that Maharaja Hari Singh was ready to join India much before Independence.

In his HT piece, Karan Singh said he had no knowledge on whether his father was ready to accede to India well before August 15, as suggested by Rijiju, adding that it is possible that the then deputy PM of Jammu and Kashmir, Ram Lal Batra, “may have spoken informally to someone in Delhi”.

He went to quote from a covering letter by his father to Lord Mountbatten on October 26, 1947, along with the Instrument of Accession, in which Maharaja Hari Singh said he wanted “to take time to decide which Dominion I should accede to, or whether it is not in the best interests of both the dominions and my state to stand independent, of course with friendly and cordial relations with both”.

“This letter gives no indication that he had decided to accede well before Partition. Even in a 1952 speech quoted by Rijiju, Nehru said, ‘even if the Maharaja and his government then wanted to accede to India’, which implies that he had not, in fact, done so,” Singh wrote.

Rijiju’s allegations against Nehru, wrote Singh, were a “separate matter”.

This is what triggered a strong backlash from the Congress, with Ramesh accusing Singh of “sidestepping” Rijiju’s “hit job” on Nehru in his article. Ramesh also claimed that there is not a “single scholarly and serious work on J&K that portrays Maharaja Hari Singh in good light”.

Ramesh said: “What I find surprising though is that Dr Karan Singh has sidestepped Rijiju’s hit job on Nehru. This the same Nehru without whose support Dr Karan Singh wouldn’t have achieved much, as he acknowledges in his 2006 book, with 216 letters exchanged between them during 1948-64,” said Ramesh.

In his statement, Singh emphasised that it would be “absolutely preposterous” to argue that his article was against Nehru.

“Pandit ji was my mentor ever since I entered public life at the age of 18 and I will always hold him in the highest regard. To suggest otherwise is outrageous. In fact, I have also dedicated my latest book An Examined Life (2019) to him. In my article I made it clear that I was not dealing with the multiple allegations made against Pandit Ji by Shri Kiren Rijiju, which I said quite clearly were a separate matter and needed a much more detailed refutation, on which Jairam should be working,” he said.

Accusing Ramesh of making “unsavoury comments” against his father, Singh suggested that the Congress MP refer to books authored by Prem Shankar Jha on Jammu and Kashmir so as to get a “different viewpoint”.