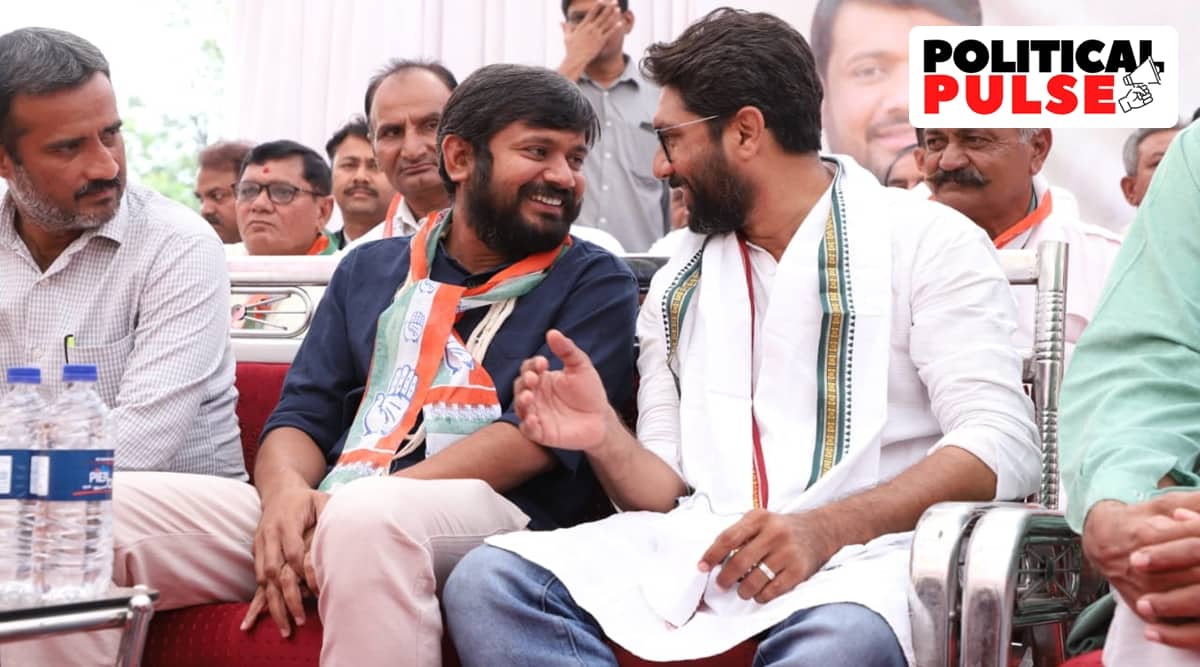 WITH TWO of its brightest young faces on the dais, the Congress on Tuesday launched its campaign for Jignesh Mevani. The BJP’s Manibhai Vaghela also filed his nomination for Vadgam seat in Banaskantha Tuesday, but the excitement and the eyeballs were reserved for Vadgam sitting MLA Mevani, who had with him Kanhaiya Kumar, the latter having come from Maharashtra, where he is part of the Bharat Jodo Yatra with Rahul Gandhi.

When Mevani, 41, won from Vadgam in 2017, he was an Independent MLA. He is now a bona fide Congress leader and one of its prominent Dalit faces. Nominated by the Congress from the Scheduled Caste reserved seat of Vadgam only on November 13, in its sixth list, he talked more about “sarva samaj” issues on Tuesday rather than just Dalit matters.

Only in the Express |In Vadgam, Mevani caught up in a four-way tussle, has work cut out

The fireworks were by Kanhaiya, who began by calling for a two-minute silence for the 135 people who died in the recent Morbi bridge collapse and then took on the BJP government over the tragedy, the release of the Bilkis Bano rape convicts and its own dynastic politics, specifically the fact that Union Home Minister Amit Shah’s son Jay occupies the prestigious BCCI secretary post.

The rallies by the Congress’s Mevani and the BJP’s Vaghela almost coincided in timing and route. Mevani held a bike rally starting from a memorial to a little-known martyr, the Shahid Veer Faljibhai Chaudhary Chowk, in village Bhangrodiya. From here, people numbering a couple of hundred accompanied him on two-wheelers over the 6 km distance to the public meeting point at the heart of Vadgam city, where a thousand or so people had gathered.

Enroute, the rally crossed the BJP public gathering, where the star presence was Minister of Medical Education from BJP-ruled Madhya Pradesh, Vishwas Sarang.

The Mevani rally, which was much delayed as Kanhaiya got late, mostly had Congress workers and members of Mevani’s Rashtriya Dalit Adhikar Manch, a big number of whom were women.

Women were also present in large numbers when Mevani took off on his bike rally. Part of a group of four curious onlookers, one of them said they were committed Congress voters and had come especially to see the Dalit leader. “We have heard of him, but we are seeing him for the first time.”

Must read |‘Hardik a fighter-leader’: BJP leaders effusive in praise as he files nomination

The 2011 Census put around 12% of the population in the village, with approximately 300 households, as SCs. Villagers estimate the household number at 1,500-1,800 now. The village also has Muslims and Bhil tribals.

About a kilometre from the village chowk live two members of the Cheliya Muslim trading community, who frequently travel to Mumbai for business. The community is known to run restaurant chains in Maharashtra and Gujarat.

Claiming that they support the BJP, one of the traders confirms what is the general consensus about this no-wave, no-overarching-issue election. “Iss baar sab thanda hai (There is no excitement this time).”

BJP candidate Vaghela is well known in the area, like Mevani. As a Congress leader in 2017, he had stayed away from the Vadgam contest, contributing in large part to Mevani’s win. Mevani had defeated the candidate put up by the BJP by nearly 19,700 votes.

At the Vaghela rally, it was announced that the BJP had set itself a target of 150 seats in Gujarat (of total 182), and was holding such meetings as it could not go door-to-door to meet all. MP minister Sarang talked about Prime Minister Narendra Modi, J P Nadda and other national leaders of the party, while listing the Modi government “successes” like the abrogation of Article 370 in Jammu and Kashmir and emphasising on the benefits of “a double-engine sarkar”.

Mevani, the consummate politician now, told the people of Bhangrodiya from where he started his bike rally that the village would rank first in his development plans for Vadgam. At the public meeting, he gave “three guarantees” focused on hyper-local issues.

“For students of all communities, I will be constructing a library, be it from the MLA grant or if I have to go out with a begging bowl. Secondly, while the Mukteshwar water project has been approved, you will see water in the Karmavat lake within the next five years. Thirdly, it has been nearly one-and-a-half years since the government announced that the Jalotra GIDC will be set up, but not even a brick has been laid. I guarantee that even if I have to fight, the GIDC unit will be set up,” Mevani said.

The sitting MLA also talked about the promise he had made in 2017 regarding getting Narmada water to Vadgam. “I made representations, raised the issue in the Vidhan Sabha and today Rs 152 crore worth of water projects have been approved,” he said.

On issues beyond Vadgam, Mevani said he had always raised his voice against unconstitutional actions, and said that if the Congress formed the government in Gujarat, cases registered over protests against the CAA/NRC in Chhapi, Banaskantha, including on serious charges such as culpable homicide, would be withdrawn.

Mevani added that a Congress government would also drop charges of misappropriation of milk cooperative funds against former BJP leader Vipul Chaudhary. The Chaudhary community comprises the second-largest chunk of the Vadgam electorate, after Muslims.

In his address, Kanhaiya said the coming elections are about “who is responsible for the Morbi bridge collapse, and for Covid-19 patients not receiving oxygen in hospitals”. “What the TV terms as an issue, is not the real issue. Close your eyes and vote for the issue that bothers you — inflation, petrol price, rapists’ sanskar being lauded (in a reference to the Bilkis Bano case), your career,” he said.