Late but with Deve Gowda back in gear, JD(S) ready for 2023 poll campaign launch

Its Pancharatna Yatra with promises covering five sectors, announced back in 2021, is now delayed due to cyclone. But party confident after setting house in order, checking fissures 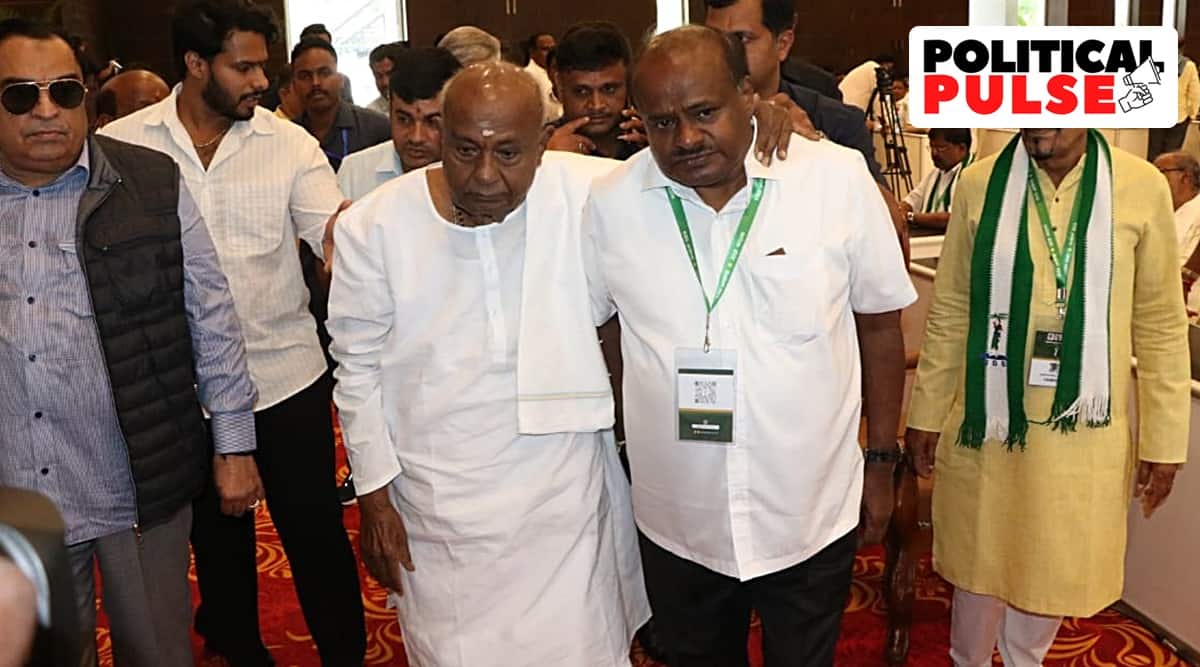 A big boost the JD(S) has received in recent weeks is the bouncing back of Deve Gowda, who remains the patriarch of the large Vokkaliga community in south Karnataka and key to the political fortunes of the party. (Twitter/@JanataDal_S)

One of the fortes of the Janata Dal (Secular) in Karnataka elections has been to come out with a clear list of promises and programmes long before the polls appear on the horizon.

In the run up to the 2018 Assembly polls, the party had promised a loan waiver for all farmers and state party president H D Kumaraswamy had travelled the state to tell people about it. The move did not help the JD(S) win but put it in a position to form a coalition with the Congress, later toppled by the BJP. As CM of that short-lived coalition, Kumaraswamy ordered a Rs 23000 crore farm loan waiver.

Also in Political Pulse |Who wants the Bengaluru civic polls? It seems no party

In 2021, when the 2023 Assembly polls were still a good 17 months away, the JD(S) had announced that it would implement a five-prong plan – ‘Pancharatna’, for the five sectors of farming, education, health, youth and women, and housing — in Karnataka if voted to power. Kumaraswamy had also said he would travel the state to spread the word.

A big part of the plan was farming reforms. Kumarswamy said at the launch: “It is my learning and experience that farm loan waivers are temporary in nature because the farmer will become indebted again. He has to borrow again to cultivate. We want to create a system where farmers do not end up in debt. We have to create storage facilities and facilitate exports and concessions.

However, the Pancharatna communication plan has remained stalled due to a series of constraints, ranging from health issues surrounding JD(S) supremo and Kumaraswamy’s father H D Deve Gowda, financial crunch, and fears of its 32-odd MLAs deserting the ship.

In the latest setback, a scheduled launch of thte Pancharatna Rath Yatra on November 1 – following a revival in the health of Deve Gowda, 89, the backing of the Telangana Rashtra Samithi, and assurances of loyalty from key leaders – has been postponed on account of a cyclone in the Bay of Bengal. It has been raining incessantly in south interior Karnataka, the JD(S) stronghold where the yatra was supposed to travel.

JD(S) sources said they would wait for the storm to subside, in the next 10 days. The yatra is meant to travel for a month across five of the party’s stronghold districts – Kolar, Bengaluru Rural, Chikaballapur, Tumkur, and Hassan.

But a big boost the JD(S) has received in recent weeks is the bouncing back of Deve Gowda, who remains the patriarch of the large Vokkaliga community in south Karnataka and key to the political fortunes of the party.

Deve Gowda had led the undivided Janata Dal to power in Karnataka between 1994-99, winning 115 seats. Despite a sharp dip in its electoral fortunes over the years, the JD(S) remains a major player even with its dwindled tally of around 40 seats. Hung verdicts in 2004 and 2018 had seen it emerge as the kingmaker.

Sources in the party admit fears of disintegration of the JD(S) in the absence of Deve Gowda, especially due to family infighting and the poaching bids by the Congress and BJP which will follow.

Over the last few weeks, a weakened but determined Deve Gowda has made several public appearances. On August 15, he walked out onto his balcony to plant the national flag, he later attended a JD(S) Janata Mitra event and the JD(S) National Executive in Bengaluru on October 28. At the meeting, he was unanimously reelected as the national president of the party. Deve Gowda has also been visiting temples in the state and was present for the launch of the Pancharatna Yatra in Kolar this week.

At the Janata Mitra event, Deve Gowda reaffirmed full faith in heir Kumaraswamy. “In the last 10 years, Kumaraswamy has tried a lot to save the party and introduced a lot of programmes. I am confident that under the leadership of Kumaraswamy, a government will be formed… There is the grace of God and I will fight for some time… stand with Kumaraswamy,” he said.

After Kumaraswamy marked his appearance at the event where the TRS announced its reincarnation as a national party with a new name, the TRS sent its MLA Rajendra Reddy to represent party chief and Telangana CM K Chandrashekar Rao at a JD(S) event. Reddy also said the TRS leadership would campaign for the JD(S) in the coming elections in Karnataka, especially in constituencies bordering Telangana.

The JD(S) is also trying to attract disgruntled leaders with a base from the BJP and Congress, and party sources claimed many were in touch. Among the names doing the rounds is former BJP minister Ramesh Jarkiholi, who was forced to quit as minister after rape charges and not reinstated despite being cleared, and some former Congress leaders now in the BJP.