Jaishankar vs Vijayan: An elevated Kerala highway and a Centre-vs-Kerala gridlock

As the two parties fight it out over development stakes, particularly in the run-up to the 2024 Lok Sabha polls, Kerala Chief Minister Pinarayi Vijayan did not take kindly to Jaishankar’s interactions with beneficiaries of various Central government schemes and, particularly, his on-site review of road development under the NHAI, during his visit. 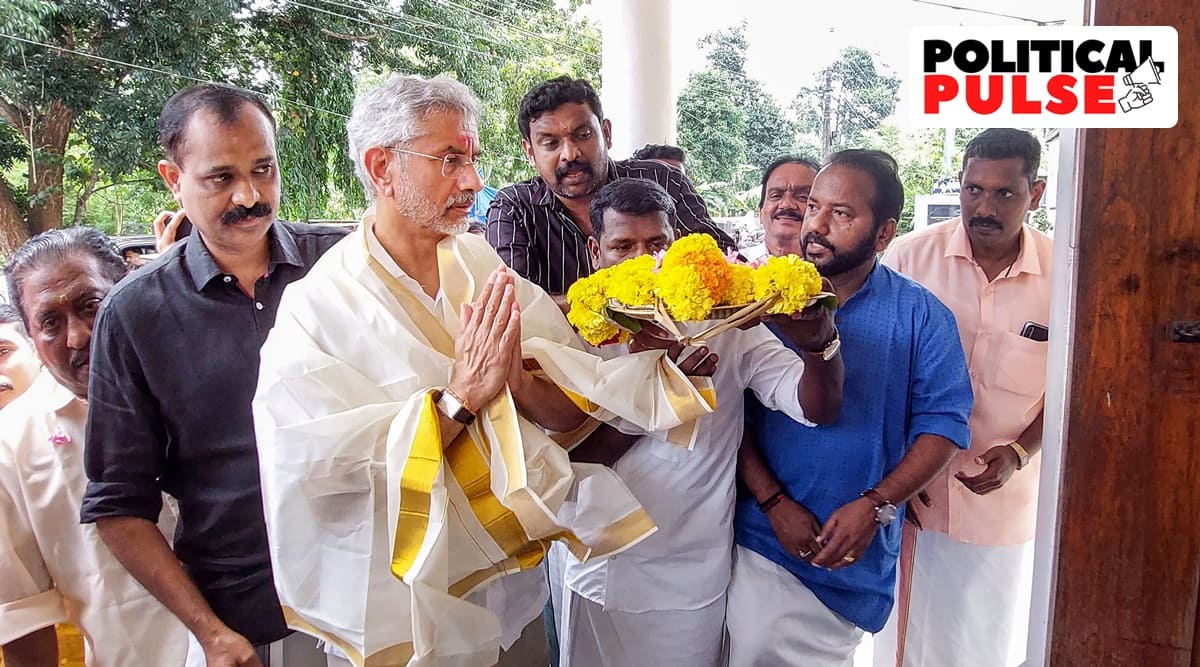 BY STANDARDS of his usual travels, the visit to Kerala should have been pretty unremarkable for Union External Affairs Minister S Jaishankar. However, Jaishankar’s three-day stay in the state has become the latest point of conflict between the BJP and ruling CPM in the state.

As the two parties fight it out over development stakes, particularly in the run-up to the 2024 Lok Sabha polls, Kerala Chief Minister Pinarayi Vijayan did not take kindly to Jaishankar’s interactions with beneficiaries of various Central government schemes and, particularly, his on-site review of road development under the NHAI, during his visit.

The matter even made it to the state Assembly on Wednesday, with Kerala PWD Minister P A Mohammed Riyas taking a jibe at “visiting Union ministers”, saying they should “count and fill” potholes on national highways instead of just clicking pictures of almost-finished projects and posting them on their social media pages.

Officially, Jaishankar’s visit was part of the BJP’s campaign of sending Union ministers to states to take stock of Central government schemes.

Referring to a photograph in which Jaishankar could be seen inspecting the work on an elevated highway stretch at Kazhakootam in Thiruvananthapuram, Vijayan said Tuesday: “When lot of developments are happening in the world, a busy External Affairs Minister has come to see a bypass… The intention behind the External Affairs Minister’s visit can be understood. It is with an eye on the next Lok Sabha elections… The BJP need not take credit for highway development.”

Jaishankar retorted, saying: “Anyone who puts development above politics could understand what I am doing. If Central ministers do not keep themselves properly informed about the progress of Central schemes, I think they are not doing their job.”

While the BJP has made only halting progress in its bid to make inroads into Kerala, it is Thiruvananthapuram where it most fancies it chances, having finished second in the seat in the last two Lok Sabha elections, and emerging as the main opponent to the ruling CPM in the city’s municipal corporation.

Besides, the Nemom Assembly constituency, which in 2016 elected the BJP’s first MLA in Kerala, falls within the Thiruvananthapuram Lok Sabha seat. In the 2021 Assembly elections, of the 14 constituencies in the district, the BJP had come second in nine. The seat is largely populated by the middle class and Nairs, both of whom are seen as having a soft spot for the BJP.

Sources in the party said it is determined to open its Lok Sabha account in Kerala in 2024, and Thiruvananthapuram figures big in the plan.

Incidentally, the constituency has been represented since 2009 by the Congress’s Shashi Tharoor, who is quite the former celebrated diplomat himself like Jaishankar. From neighbouring Tamil Nadu, Jaishankar is seen as one who can match the suave and erudite Tharoor.

The BJP has been hard-selling the developmental initiatives and infrastructure projects brought to Kerala by the Narendra Modi government since 2014. National highway development, delayed in Kerala for years, is one of its prime eyecatchers for the state.

But the Vijayan government too takes credit for the development of national highways and implementation of Central projects such as the GAIL pipeline in the state. Since he assumed office in Kerala in 2016, one of his government’s main themes has been clearance of bottlenecks for Central projects.

This has been achieved in the face of opposition from within own ranks, apart from outside, over issues such as land acquisition. Attractive compensation packages have been handed out, with the state government’s decision to bear 25 per cent of the cost of land acquisition going a long way towards easing the way.

As part of this, the Kerala Infrastructure Investment Fund Board has already given Rs 5,300 crore to the NHAI for the Kerala stretch of NH 66. Vijayan is banking on the corridor being ready before the next Assembly elections in 2026.

In his public addresses in recent months, the CM has regularly highlighted the national highway development in his regime. The refrain is: “something reckoned impossible in the state has materialised”.

BJP state president K Surendran Wednesday directly attacked Vijayan and Riyas, also the CM’s son-in-law, over the Kerala “contribution”. Accusing the two of being angry as they could not torpedo Central government projects, Surendran said: “Why are they getting restive over Jaishankar’s visit to Kerala? Apart from Rs 34,000 crore for existing projects, the NHAI is implementing other projects worth Rs 21,275 crore in the state. The state is giving only 25 per cent of the land acquisition cost, the rest of the expense of highway development is being met by the Centre.”

with inputs from Liz Mathew, Delhi

Include these 5 foods in your diet to relieve constipation naturally