Interlocking tiles and ties: Story behind the road Rahul Gandhi inaugurated in Mysuru

The path connecting the Dalit and Lingayat homes in Badanavalu village had been cut off since 1993, when three Dalits were killed in a clash over temple entry 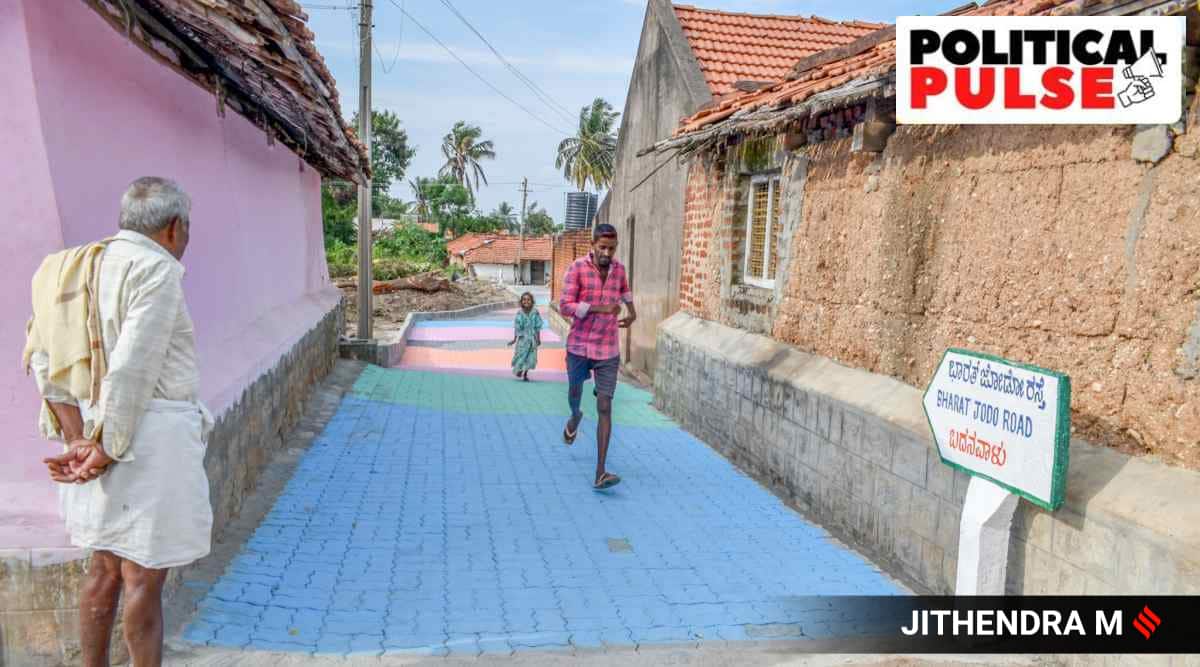 Named 'Bharat Jodo' Road, the path was renovated in a matter of 48 hours by the Congress that said it aimed to send out a message of harmony among communities. (file)

LAST WEEK, as part of his Bharat Jodo Yatra, which is now winding its way through Karnataka, senior Congress leader Rahul Gandhi visited Badanavalu, a village in the state’s Mysuru district, and inaugurated a path with colourful interlocking tiles connecting the Dalit quarters of the village with that of the Lingayat community.

Named ‘Bharat Jodo’ Road, the path was renovated in a matter of 48 hours by the Congress that said it aimed to send out a message of harmony among communities. Gandhi even laid some of the pink-and-blue tiles himself, thus reopening a link that had been cut off nearly three decades ago in violent circumstances.

Mahadevappa who was convicted in dalit killings was released from prison last year. Express Photo by Jithendra M

On March 25, 1993, following heightened tensions between Dalits and upper-castes, mostly Lingayats, three Dalits were killed in Badanavalu village. The CBI, which took over the case, filed a chargesheet against 23 persons belonging to the Lingayat community. Seventeen years after the incident, in 2010, 20 men were convicted and sentenced to life imprisonment for the killings.

The clash was over a Siddeshwara temple that the villagers had built on the outskirts of the village. While both communities had contributed equally, once the temple came up, the Lingayats allegedly banned the entry of the Dalits. It was a time when the Dalits of the old Mysuru region, exposed to Dalit literature, especially of authors such as Devanoor Mahadeva, were getting increasingly vocal and aware of their rights. Finally, the community took the legal route to enter the temple with police protection.

That further angered the Lingayats and tensions and suspicions simmered till they blew up that day on March 25, when the Dalits were attacked.

Somanna B M, then 14, says he vividly remembers the incident. “It was the day after Ugadi, when we were celebrating the Hosa Varshadaduku festival. A team from my village had gone to Devanoor to play a cricket match and were returning when a mob of at least 30 people attacked them. School head master B R Narayanaswamy, his son Madhukar and their neighbour Nataraj (all Dalits) were murdered.”

Somanna says he was sitting on a swing when he witnessed the attack. “Some people from our community rushed to me and told me to go to home. I went to a neighbour’s house and hid there,” he adds. As the violence spread, two protesters were killed in police firing in nearby Nanjangud.

Now, nearly 30 years later, while memories of that tragedy hang heavy over Badanavalu, villagers say they are trying their best to move on. Of Badanavalu’s population of 2,753, Dalits make for a substantial number at 1,153. Of the remaining 1,600, the Lingayats form the majority.

Villagers say both communities now depend on each other, working in each other’s farms and celebrating festivals together. Of the 14 gram panchayat members, four are Dalits.

Nagaraj, 56, a Lingayat farmer who was among those convicted for the killings of the three Dalits, was released last year after he spent 10 years in jail. While the trial in the case was on, Nagaraj had contested and won the gram panchayat elections.

Looking back at the incident that changed the course of their village, Nagaraj says he is filled with regret. “If someone flaunts their caste or discriminates against others, they should be sent to jail. For whose good were those people murdered? What did we (the Lingayats) get out of it?”

Besides losing three acres of agricultural land, Nagaraj says he missed seeing his grandson grow up. “I was in several prisons across the state. Day-time in jail is usually ok, but the nights haunt you. That’s when I missed my family the most,” he says.

In the Dalit part of the village, Somanna says, “Whatever happened is now behind us. I hope the ‘Bharat Jodo’ road sends a message across the country that people need to be brought together, not kept apart.”

From the Explained editor: A week of Nobels, eye on China, and a tragedy in Africa