In Gujarat, AAP may be more sound than action, but it has got BJP’s attention

AAP likely to hurt Congress rather than BJP, but ruling party not taking any chances; revises plan to drop many MLAs, wields PM Modi, lines up promises, moderates targets 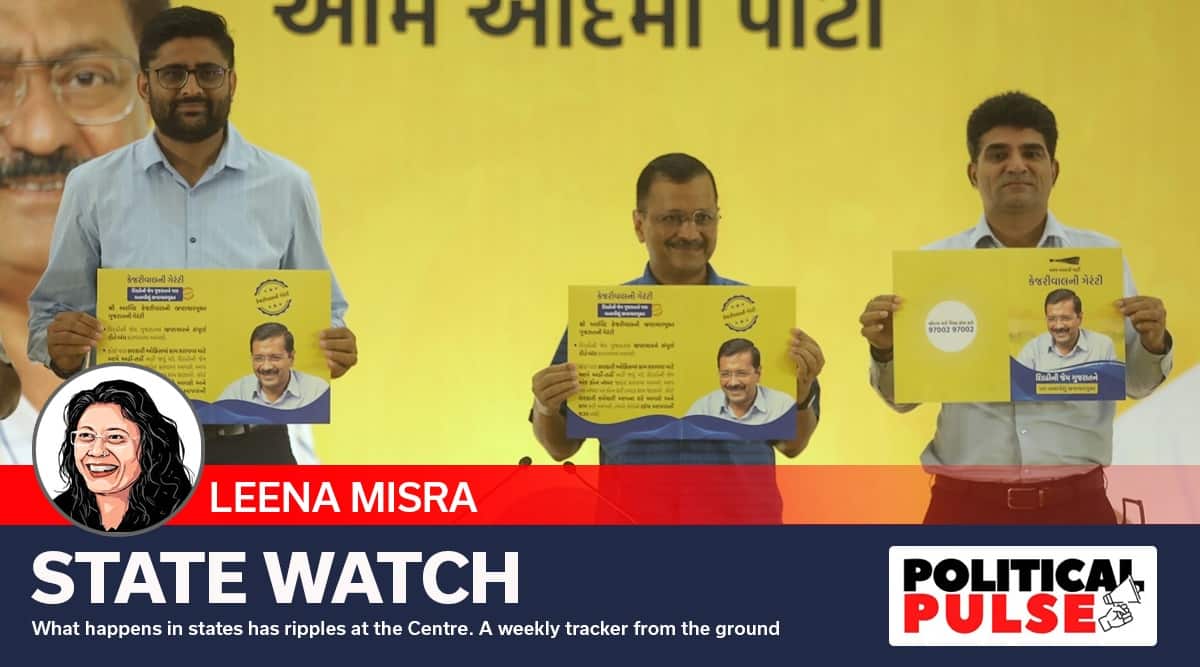 If winning the coming elections seems distant, AAP is clearly eyeing to become the main opposition in Gujarat, like it did in Surat in the February 2021 local body polls. (Express photo by Nirmal Harindran)

It was in March that a senior functionary of the Aam Aadmi Party (AAP) told this paper, “We will give a tough fight (to the BJP).” From April to now, Delhi Chief Minister and AAP supremo Arvind Kejriwal has been coming to Gujarat almost every week, announcing guarantees, claiming “IB reports” that talk of AAP forming the government, and on Saturday, announcing a phone number where people could suggest their names for a CM candidate for the party. He has done rallies even in remote tribal districts, after the Bharatiya Tribal Party (BTP)’s Chhotu Vasava called off their alliance.

When his deputy Manish Sisodia was being questioned by the CBI in Delhi, he spoke about it in Gujarat – “They do not want Sisodia to campaign in Gujarat”, he said at public rallies. He has been promising free rides to the Ram mandir at Ayodhya and now he has proposed Hindu gods on currency notes, an idea straight out of the BJP’s playbook.

If winning the coming elections seems distant, AAP is clearly eyeing to become the main opposition in Gujarat, like it did in Surat in the February 2021 local body polls.

Even as the BJP leaders cite their party’s success in the local body polls as a metric for their confidence about the Assembly elections, there is a growing nervousness within the party. It is clear in the fact that it has given up the attitude of watching AAP from a distance and not engaging with it, to seeing it as the party it has to take on as much as the Congress.

Accordingly, there have been other changes. BJP state chief C R Paatil apparently wanted to continue the strategy of not repeating a ticket to anyone who had completed three terms, and not fielding family members of political functionaries – which ostensibly worked in the local elections. In October 2021, Paatil had even declared at a party meeting that the Assembly elections would see more than 100 new faces as contestants. That seems to have gone out of the window now, with the BJP also picking cues from Himachal Pradesh, where it is fighting rebellions rising from dropped sitting MLAs.

The BJP has also deployed every weapon in its arsenal — from Prime Minister Narendra Modi making frequent and longer visits to the state to launch projects, Union Home Minister Amit Shah talking to party workers in person, the Bhupendra Patel government clearing long-pending demands from various quarters, announcing freebies and, recently, hosting a yatra across the constituencies where it is electorally challenged.

Some ministers who were part of the replaced Vijay Rupani government, earlier seen as unlikely to get a ticket, and had won by margins lower than 1,000 votes in 2017, are now back in their constituencies, campaigning.

The BJP also ensured that every party functionary, including new entrants such as Hardik Patel, played a part in the recently concluded Gujarat Gaurav Yatra that covered 144 constituencies.

Among those hoping for a ticket is Hardik, who was younger than the age limit to contest last time. He has lately begun spending most of his time in Viramgam, his hometown and a constituency currently held by the Congress.

As one of the ministers dropped in the wholesale change of the Rupani government with a completely new Cabinet said: “I am hopeful of getting a ticket. And why not? Amitbhai (Amit Shah) has already announced that winnability will remain a criterion.”

There is also a moderation of expectations. If Paatil in 2020 spoke of winning all the 182 Assembly seats, at a time when AAP was nowhere in the picture while the Congress remained moribund, now the party talks of breaking the Congress’s 1985 victory record of 149 of 182 seats.

Don't Miss |Amid BJP’s claims of a wave, AAP tries to create a splash in Gujarat

But, as at least two former ministers said, that may be more on account of the damage AAP is likely to cause to the Congress. One of them said, “AAP will only benefit us. The Congress is going to be hit badly.” According to this leader, AAP might even end up without any seats, “not even those held by the Congress (right now)”, but hurt it enough to help the BJP.

Another former minister said the BJP was ready to face any challenge AAP puts up. “If they are proposing images of Hindu gods on currency notes, we will do it and show them,” the minister said, confident that the BJP would win all five seats in the district where he is an observer. Currently, the BJP holds two seats in this district in Central Gujarat.

AAP’s game plan involves focusing on the urban seats, where it showed it had some hold in the 2021 civic elections, and which are traditionally BJP bastions. AAP got nearly 14% of the votes in the seven municipal corporations that went to polls at the time, compared to the BJP’s 53% and the Congress’s 26.75%. While in Rajkot, AAP’s vote share was 19%, it was 20% in Ahmedabad and 28% in Surat, where it replaced the Congress as the main opposition.

“Gujarat mein woh sarkar banaa sakti hai, jo urban seats jeet sakta hai (The party that wins urban seats can form the government in Gujarat),” a national AAP leader said, adding that in the municipal corporation elections, the party got 19% of the votes in Rajkot without a single rally of Kejriwal being organised there.

The leader further talks about 66 urban seats in Gujarat which the BJP has been winning for the past 15-20 years “only because it is facing the Congress”. “If elections are held today, in Surat (district), we will win eight-nine of the 16 Assembly seats, 15 of which are held by the BJP today.” The leader argues that since in rural areas, the BJP’s support is anyway lower, a good performance in urban areas would leave AAP in a comfortable position.

Also Read |‘Phone-in with your CM candidate’: AAP tries a Punjab in Gujarat

Meanwhile, the Congress continues to crawl, fighting leadership crises at the organisational level nationally and locally. It’s not lost on anyone that its two top leaders in-charge of the Gujarat election – CM Ashok Gehlot and former minister Raghu Sharma – are from neighbouring Rajasthan, where the party is fighting its own problems.

The party, which in 2017 came closest to dislodging the BJP government since 1995, is hoping the tide will turn now, with a new president (Mallikarjun Kharge) finally in place and the party set to launch a Parivartan Sankalp Yatra from October 31 with several known faces. That incidentally is Sardar Patel’s birth anniversary, when Modi will be at his government’s showcase Statue of Unity in Kevadia.

No prizes for guessing that even that day, the Congress will have to fight for eyeballs.