In BJP Economic Resolution, a dose of welfare schemes

Jaitley, for his part, challenged the Congress’s welfare economic model. 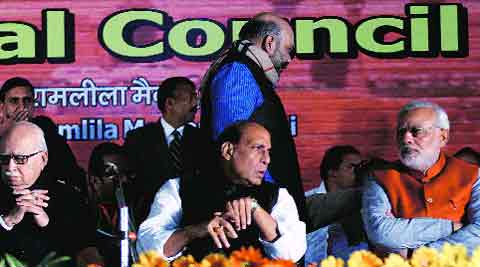 Advani, Rajnath, Modi during the National Council Meeting at Ramlila Maidan, in Delhi on Saturday.

The speech suggested that the BJP will extend the Congress-led government’s rights-based welfare regime — including NREGA and Food Security Act — with a Right to Health. “We will enshrine the Right to Health for the poorest of the poor through legislative provisions,” Rajnath Singh said.

Presenting a grim picture of the economic situation after a decade of the UPA regime, BJP leaders cautioned PM candidate Narendra Modi about the “challenges” awaiting him. They also promised rationalisation of taxation, stable tax laws to restore investor confidence, as well as an “infrastructure revolution”, of the kind, they said, seen during the Atal Bihari Vajpayee-led NDA government.

“On coming to power, we will focus on infrastructure to provide faster economic development… The BJP will double the share of infra investment to GDP ratio,” Rajnath Singh said. The party will be tapping NRIs for this as well as try “to develop a bond market where different institutions and agencies will be able to garner resources for the infrastructure sector”.

For easing supply-side bottlenecks and checking inflation, the BJP president talked swadeshi, proposing “kisan bazars” as an alternative to organised retail. “Modernisation and vested business interests have sounded the death knell for vegetable markets and weekend markets. We need to revive these markets every town and city as organised retail will neither benefit farmers nor consumers,” he said. Junking the taxation model proposed by yoga guru and Modi supporter Ramdev, the BJP promised instead rationalisation and simplification of taxation in an ‘Economic Resolution’ moved by leader Arun Jaitley. Rajnath Singh suggested slashing of tax rates for the salaried class. He also expressed his commitment to a transparent mechanism for allocation of resources.

Jaitley, for his part, challenged the Congress’s welfare economic model, emphsising instead on growth to provide resources for welfare schemes.

“I wish those who tom-tommed poor and poverty yesterday had also given a thought to generating resources to help the poor,” Jaitley said, in a dig at Rahul Gandhi’s speech at a Congress session on Friday. Jaitley added: “The oldest party always extracts commission, whether one tries to sell a comb or give a haircut to the bald.” Rahul had accused the BJP of being capable of selling combs to the bald while the AAP, he hinted, would promise them haircuts.