Himachal Pradesh election results: 5 rebels to look out for – who are they, where will they go?

The BJP had a tumultuous run-up to the elections after its decision to drop 11 sitting MLAs and many other heavyweights set off an internal revolt. The Congress too faced its share of problems from disgruntled leaders. 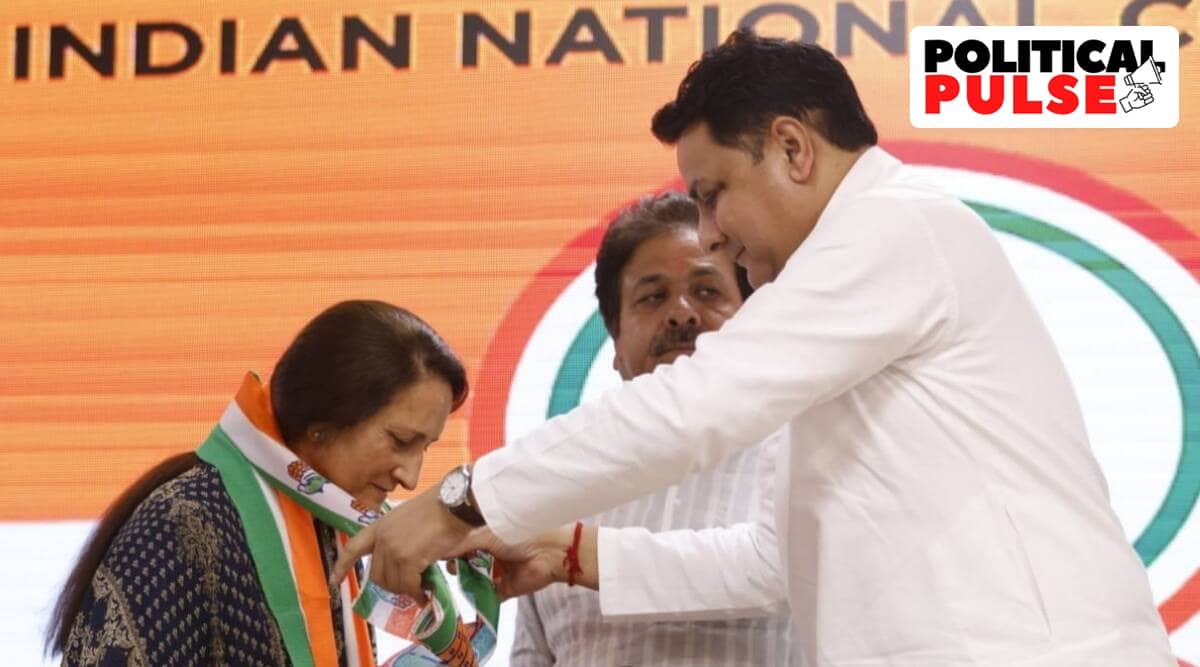 Indu Verma has been associated with politics for the last two decades. She is the wife of three-time MLA Rakesh Verma who passed died of a heart attack two years ago. Rakesh Verma won from the Theog constituency twice as an Independent and once on a BJP ticket. (File)

The BJP’s Assembly election campaign in Himachal Pradesh ran into a roadblock following ticket distribution. After the ruling party dropped 11 sitting MLAs and introduced several fresh faces, there were rebellions in several camps. With hundreds of party workers resigning in support of candidates, the BJP had a tumultuous run-up to the elections.

The Congress was also not spared as several disgruntled leaders who were denied tickets filed nominations in crucial seats.

In a state where small margins can decide the fate of candidates, it will be interesting to see how the rebels fare. The following are five important Independent candidates:

Indu Verma has been associated with politics for the last two decades. She is the wife of
three-time MLA Rakesh Verma who passed died of a heart attack two years ago. Rakesh Verma won from the Theog constituency twice as an Independent and once on a BJP ticket.

With Indu joining the Congress in July, the party hoped to boost its chances in the Theog region as the family still has a support base in the region. But former Haryana Congress chief Kuldeep Singh Rathore lobbied for a ticket from Theog and was fielded from the constituency. Resentment about not getting the ticket prompted Indu Verma to contest as an Independent. Also in the fray is Vijay Pal Khachi, the son of veteran Congress leader JBL Khachi. A loss in the key constituency in Himachal’s apple belt will be a big blow to the Congress

He started as a BJP worker and rose through the ranks in the district and state units. Parmar went on to become a Rajya Sabha MP and was appointed the vice president of the state BJP. Last year, he was denied a ticket during the Fatehpur bypoll and he resigned from his post last year, pointing out problems in the party’s state leadership. The party fielded Baldev Thakur during the bypoll but he lost to the Congress’s Bhawani Pathania by more than 5,800 votes.

After being overlooked this time too, an emotional Parmar told locals in Fatehpur that he had not been rewarded for his 40 years of service to the party. He contested against state minister Rakesh Pathania and Bhawani Pathania.

In Kullu, the BJP gave a ticket to Maheshwar Singh who hails from the region’s erstwhile royal family. He had won the seat earlier as a member of the Himachal Lokhit Party, which later disbanded and merged with the BJP.

Maheshwar’s ticket was eventually cancelled as his son Hiteshwar announced that he would contest as an Independent from Banjar after the BJP refused to field him. A nervous party high command pressured Maheshwar to convince his son to not fight.

Eventually, the party dropped Maheshwar and gave the ticket to Narotam Sigh, a teacher. Hiteshwar contested as an Independent against the BJP’s Surinder Shourie and Khimi Ram, former BJP president who joined the Congress earlier this year.

Hiteshwar’s rebellion caused problems for the BJP in Kullu and Banjar. The region is crucial since it is an important tourism centre and the location of development projects.

The constituency of Pachhad in Sirmaur, which is reserved for Scheduled Caste (SC) communities, witnessed a battle between two women — the only such face-off out of the 68 Assembly seats in the hill state.

Dayal Payari was seen as the BJP frontrunner for a by-election in 2019. She was allegedly denied the ticket by the camp of Suresh Kashyap and CM Jai Ram Thakur as she belongs to former CM Prem Kumar Dhumal’s group. The BJP instead fielded Reena Kashyap, a Zila Parishad member, for the bypolls.

Congress rebel candidate Gangu Ram Musafir also contested from Pacchad in the name of Virbhadra Singh. A seven-time MLA with a sizable presence in the region, Musafir contested as an Independent.

Addressing a gathering of supporters in Nalagarh in Solan, KL Thakur referred to his decision to contest as an Independent and asked people, “Mera kya kasoor (What is my fault)?”

After taking voluntary retirement as an Executive Engineer in Irrigation and Public Health department in September 2012, Thakur contested on a BJP ticket and won from Nalagarh.

In 2017, he lost by 1,300 votes to Lakhwinder Singh Rana of the Congress. This time, Thakur was denied a ticket after Rana moved from the Congress to the BJP and was given the ticket by the ruling party.

Thakur held rallies to generate public sentiment against the BJP and people to respond to the BJP’s decision to rob him of his ticket. The Congress fielded the state chief of the Indian National Trade Union Congress (INTUC), Hardeep Singh Bawa, as its candidate.