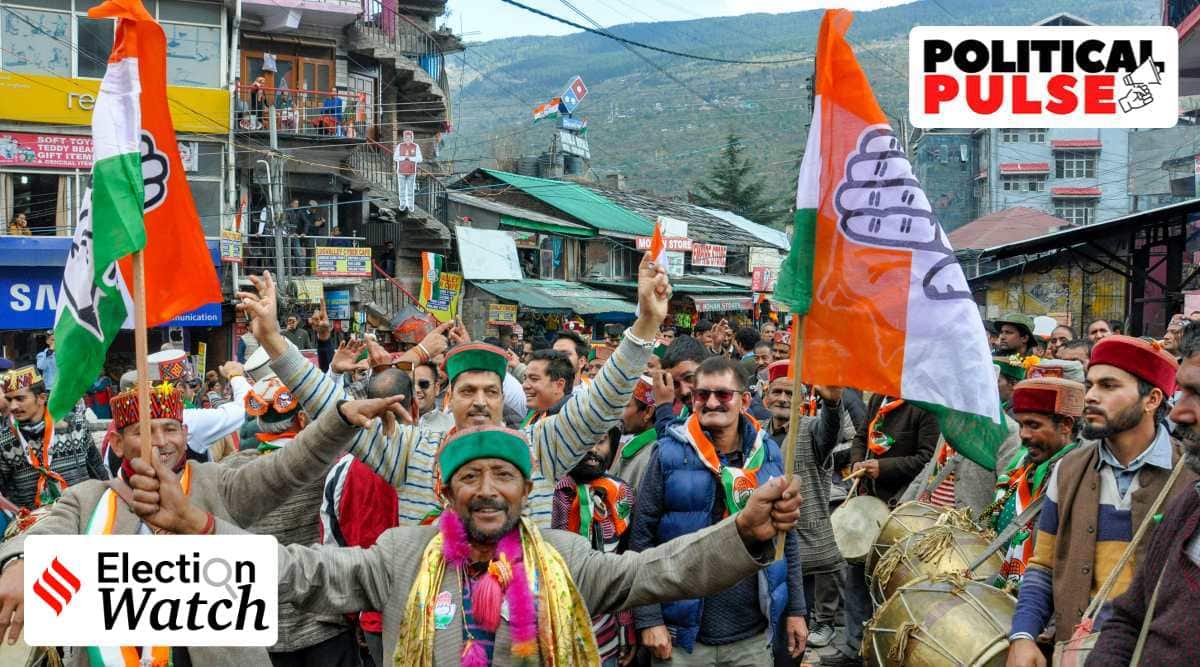 As Himachal Pradesh votes Saturday, it is the culmination of a heated campaign, with expectations of a close contest. A confident BJP hit a speed-breaker with multiple rebellions, while the Congress faces the problem of multiple CM faces and their respective lobby of supporters.

For the BJP, the momentum was set by Prime Minister Modi’s multiple visits over a one-week period last month. The PM inaugurated a Vande Bharat train and the AIIMS at Bilaspur as key projects. This was in line with the party’s campaign in the run-up to the polls, even as the incumbent Chief Minister visited several constituencies to announce development projects worth over Rs 1,000 crore.

Following the announcement of poll dates, the ruling party kicked off a state-wide campaign on October 30, by organising rallies in all 68 constituencies. Named Vijay Sankalp Abhiyan, it included five central ministers, three chief ministers and four cabinet ministers from Himachal and other states, besides nine members of the state BJP unit.

The ruling party also focused on national issues in its campaign, with posters coming up along state roads and highways in which PM Modi’s image was visible, even as CM Jai Ram Thakur went missing in many hoardings, which listed the benefits of national schemes such as the Health Mission and the abrogation of Article 370.

The BJP used the strength of several senior national leaders to push the party’s agenda, while the Congress banked mostly on state-level leaders. Both Rahul and Sonia Gandhi were included in its list of star campaigners, but neither made it to the state. Instead, AICC general secretary Priyanka Gandhi Vadra led the campaign with multiple visits.

“Whether Rahul Gandhi would make it to the state wasn’t for one person to decide. There is the Bharat Jodo Yatra taking place, and everyone realises its importance, including the public and party workers. The sound of the Yatra is being heard far across, and will matter a lot in these elections,” CM Bhupesh Baghel told The Indian Express in an interview.

Both PM Modi and Vadra also stressed on their connection with the state. In multiple speeches, Modi recalled how he had once been Himachal in-charge of the BJP, when he had “roamed the streets” across the length and breadth of the state. Vadra kicked off the Congress’s campaign with a rally in Solan, in which she spoke of Indira Gandhi’s contribution to the state, and that she had built a house here to honour the family’s ties with it.

Read |16 voters and a hamlet called Ka: All quiet on this poll front

J P Nadda, the BJP national president and a Himachal MP, made regular visits to the state to oversee the party’s election preparation. As rebellion broke out after ticket distribution, he even visited Shimla unannounced to meet party workers.

“The message is simple. We have to go all out in the elections. Every little detail has to be looked into. This is the instruction given at all levels, from mandals to booths. Groundwork is an essential component, and we see that there is a direct response when big leaders visit,” said a party worker.

The BJP stressed heavily on national issues like Ram Mandir and national security. The party has also promised implementation of the Uniform Civil Code and evaluation of Waqf Board properties as part of its manifesto. The party brought in UP CM Yogi Adityanath for 15 rallies over a span of four days.

“Can one imagine free vaccines during Covid, a grand Ram Temple in Ayodhya, abrogation of Article 370 or a surgical strike during a Congress government? Neither does the Congress respect your faith, nor can it provide you with security. Then why do you need to support it?” the UP CM said during his rally at Anni.

The Congress maintained its focus on the Old Pension Scheme (OPS) throughout its campaign. The BJP remained silent on OPS in its manifesto, stating that a committee has been formed that will look into the demands.

On the final day, the BJP closed the campaign with Nirmala Sitharaman holding a press conference in Shimla, while the Congress carried out a rally in each of the 68 constituencies.

Locals have taken cognisance of the BJP’s push for the PM’s face in its publicity material for the state. The rebellion within the BJP ranks has raised questions on CM Jai Ram Thakur’s leadership, even as the BJP kept seeking votes in his name. “People have specific issues, and they will keep these in mind. The BJP has relied on the PM for these elections, and no doubt he is popular. (But at the end of the day, things that impact the daily lives of people will influence voting,” said Amit Thakur, a Shimla resident.