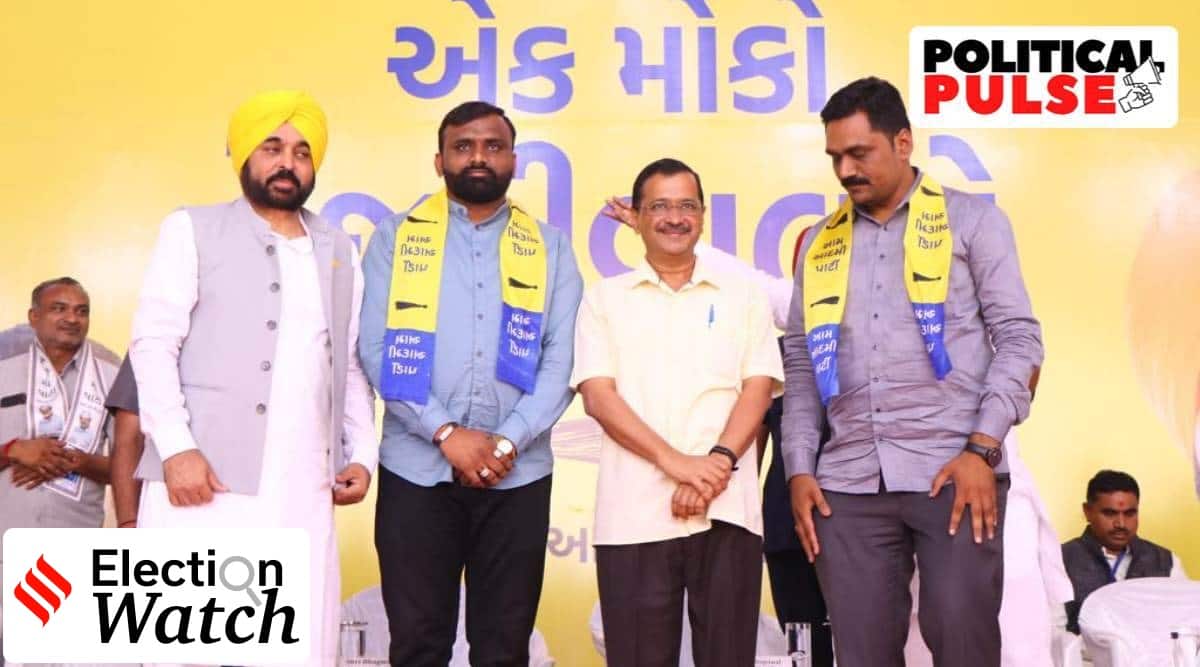 Two senior-most leaders of the Patidar Anamat Andolan Samithi (PAAS), which spearheaded the agitation for a Patidar quota in 2015, joined the Aam Aadmi Party Sunday in a major boost for AAP in Gujarat.

Indicating the significance of PAAS convenor Alpesh Katheriya and co-convenor Dharmik Malaviya joining it, AAP national convenor Arvind Kejriwal was present to welcome them into the party, along with Punjab Chief Minister Bhagwant Mann. The main comrades of Hardik Patel in the Patidar quota agitation, the two are likely to be fielded by AAP in the coming polls.

Sources said while Katheriya, 30, might be given a ticket from Patidar-dominated Varachha, 29-year-old Malaviya could be the AAP candidate from Kamrej or Olpad in Surat. Katheriya belongs to Bokharwada village and Malaviya to Vakiya, both in Amreli district.

With the Patidar anger proving costly for the BJP in 2017, reducing it to its lowest tally since 1995, the party is expected to pit Hardik against his former Patidar colleagues.

A lawyer by profession, Katheriya was associated with the Sangh Parivar’s ABVP in his college days. In 2015, he came in contact with and grew close to Hardik, who was working with the Sardar Patel Group in Central Gujarat. Together, they started the movement to get Patidars included under the OBC quota, which later morphed into PAAS and generated mass support.

A rally led by Hardik and Katheriya in Surat on August 17, 2015, under the banner of PAAS had drawn lakhs of Patidar youths. While the meeting was peaceful, it had been followed by violence by protesting Patidars across the state and the death of 14 Patidar youths in police action. Among the Patidar leaders slapped with cases following the violence were Hardik, Katheriya as well as Malaviya.

Katheriya had two cases of sedition, and a total of around 30, lodged against him. Malaviya faces around 22 cases, with some against him withdrawn by the government.

Advertisement
In Premium |In Gujarat, AAP may be more sound than action, but it has got BJP’s attention

After Hardik joined the Congress in 2020 and distanced himself from PAAS, Katheriya and Malaviya took up the cause of the Patidar Samiti, and did the rounds of Gujarat Chief Minister Office seeking to have the cases against Patidar youths withdrawn, and to get compensation and government job for families of youths who died during the agitation.

Malaviya says the reason that no action was taken on their demands prompted them to turn to AAP, and that they had considered both the BJP and Congress before deciding on Kejriwal’s party. “After Hardik joined the BJP, he said that all the demands raised by PAAS would be fulfilled in two months, but there has been no movement. Hardik too has been sidelined and rendered inactive. In the Congress, we don’t find any potential… They are not even a presence in the political arena for the coming elections,” Malaviya says.

AAP, he adds, is “creating a major impact in the politics of Gujarat”. “We have great regard for Arvind Kejriwal. He has assured that once an AAP government is formed, all our demands will be met,” Malaviya says, adding that from their side they have not put any personal demands and would take up any responsibility given to them.

Malaviya admits there were some issues with AAP state president and fellow Patidar leader Gopal Italia, but adds these had been sorted. “It was due to PAAS support that 27 candidates of AAP got elected in Surat. Same as how we supported Congress in the 2016 Surat Municipal Corporation elections, and over 25 of its councillors got elected for the first time from Patidar-dominated areas in Surat.”

Malaviya claims Hardik too might join them in AAP. “He was uncomfortable in the Congress due to issues with the top brass. In the BJP, he is unhappy as he has not been given a platform or freedom. He will not remain there for long. We are in regular touch, and we hope he will join AAP in the coming weeks.”

Gujarat state AAP general secretary Manoj Sorathiya says the party is a natural home for the two PAAS leaders. “Our party is for struggling people. Both Alpesh and Dharmik have been protesting against the BJP for long over their demands. They are public figures and have a good fan following. Here in AAP, they will get a platform. While they will benefit, AAP will also benefit from them.”