In Mahudha, Amit Shah targeted the Congress leadership and took a swipe at Rahul Gandhi saying, “He (Rahul Gandhi) is not going to come to Mahudha. He knows the results, and so he is not showing his face in Gujarat." 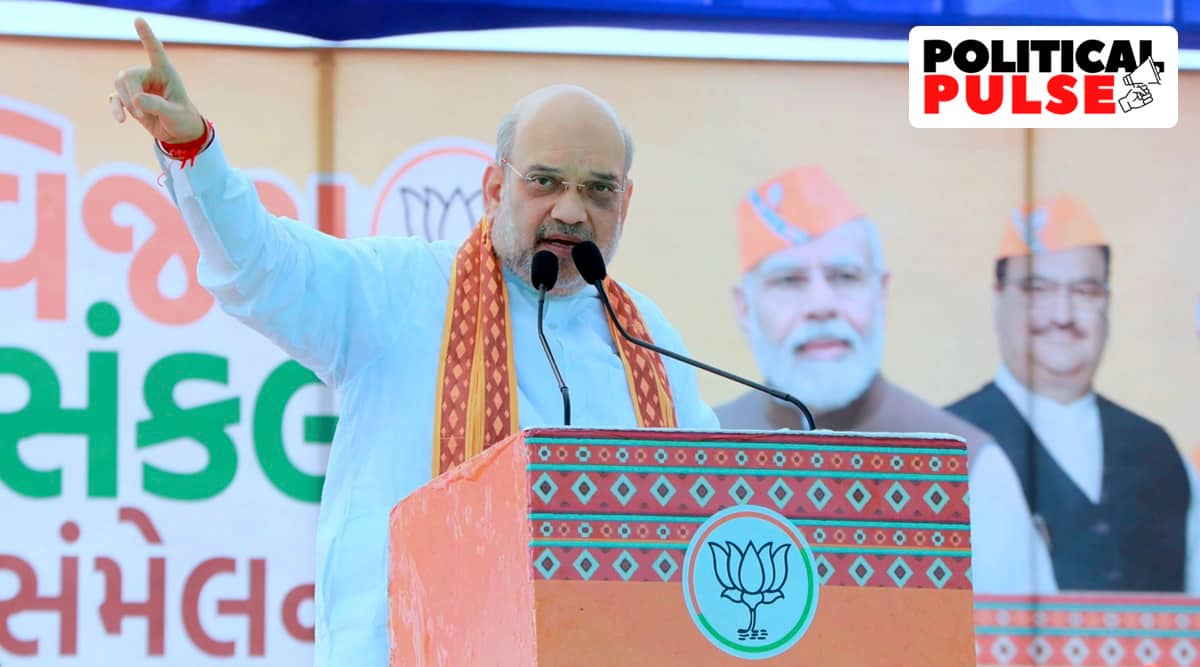 Amit Shah had made a passing reference to the 2002 riots in an election speech in Deesa in Banaskantha district on November 22. (PTI/File)

RAISING THE pitch in the countdown to the Assembly elections next month, Union Home Minister Amit Shah said Friday that “such a lesson was taught in 2002” to “those engaging in communal riots” in Gujarat that it led to “akhand shanti” (eternal peace) in the state under the BJP.

In 2002, Gujarat witnessed large-scale violence in the communal riots that followed the burning of a Sabarmati Express coach, packed with Ayodhya kar sevaks, in Godhra.

Addressing a rally in Mahudha in Kheda district — the Mahudha seat is currently held by the Congress — Shah said, “Aa 2002 ma, Congressiyao e aadat paadi hati, etle ramkhan thaya hata. Pan 2002 ma evo paath sikhvadiyo, ke kho bhuli gaya. 2002 thi 2022 sudi naam na le (In 2002, communal riots took place because the Congress people let it become a habit. But such a lesson was taught in 2002 that it was not repeated from 2002 to 2022).”

Subscriber Only Stories
View All
At the end of the Bharat Jodo Yatra
Why BharOS has Indian developers excited and sceptical: ‘More choice is g...
UPSC Essentials | Weekly news express with MCQs: Republic Day, India-Egyp...
As India prepares for centralised power market shift, EU moves a differen...
Apply New Year promo code SD25
In Premium |How in some Gujarat contests, 2002 gets refreshed in 2022

Shah had made a passing reference to the 2002 riots in an election speech in Deesa in Banaskantha district on November 22. “In 2001, Narendra Modi came to power and after 2002, there was no need to put curfew anywhere. Everyone fell in place. Is there a mafia now? Is there a dada (gangster)?” he had told the gathering.

Also Read |Education to inflation, Gujarat youth confident about issues but not parties

On Friday, Shah referred to 2002 again while addressing public meetings at Jhalod in Dahod and Vagra in Bharuch.

“During Congress rule (in Gujarat), didn’t communal riots happen? In 2002, during the reign of Narendra Modi (then chief minister of Gujarat) they tried to do the same. They were taught such a lesson that it is now 2022 and nobody raises a head. Those who used to organise communal riots have gone outside Gujarat. The BJP established peace in Gujarat and made it a region without curfew,” he told the gathering consisting largely of tribals in Jhalod.

In Vagra, which has a significantly high Muslim population, Shah said, “This land has seen a lot of communal riots — curfew and stabbings. How will development happen in such circumstances? In 2002, these people last showed courage. Isn’t that so? Such a lesson was taught during that time. One by one, they were sorted and put in jail. It has been 20 years and not once was there a need to impose curfew.”

Also Read |Isudan Gadhvi Interview: ‘We are not the Congress. We’ve forced Narendra Modi to enter schools. We set the narrative in Gujarat now’

“The lotus of BJP saved Gujarat from the fire of communal riots and took it on the path of development,” he said.

Shah also addressed a public meeting in the Naroda constituency of Ahmedabad city late in the evening when he said that the opposition Congress has no right to talk about establishing peace in Gujarat.

“Congress has ruled for years. And if there is anyone who has ravaged Gujarat through communal riots, it is Congress people…Nobody has the courage to do communal riots (now),” Shah said. He was campaigning for BJP candidate Payal Kukrani, who is the daughter of 2002 Naroda Patiya massacre convict, Manoj Kukrani, who was sentenced to life imprisonment and is currently out on bail.

“In 2002, a mischief was done… the BJP government tightened the noose of law so sternly that it taught a lesson to those doing the riots,” he said.

Targeting the Congress further, Shah claimed that the party neither abrogated Article 370 in J&K nor strengthened places of “our faith” out of “fear of its votebank”. “Congress people can be scared of its votebank, but not BJP people. Do you know what their vote bank is?” Shah repeated the question more than once, and as the audience replied in the affirmative, said, “Then, I am not spelling it out.”

In Mahudha earlier, Shah took a swipe at Rahul Gandhi, too. “He (Rahul Gandhi) is not going to come to Mahudha. He knows the results, and so he is not showing his face in Gujarat,” he said.

Man shares how he met Virat Kohli when he visited Uttarakhand temple with his family. Watch