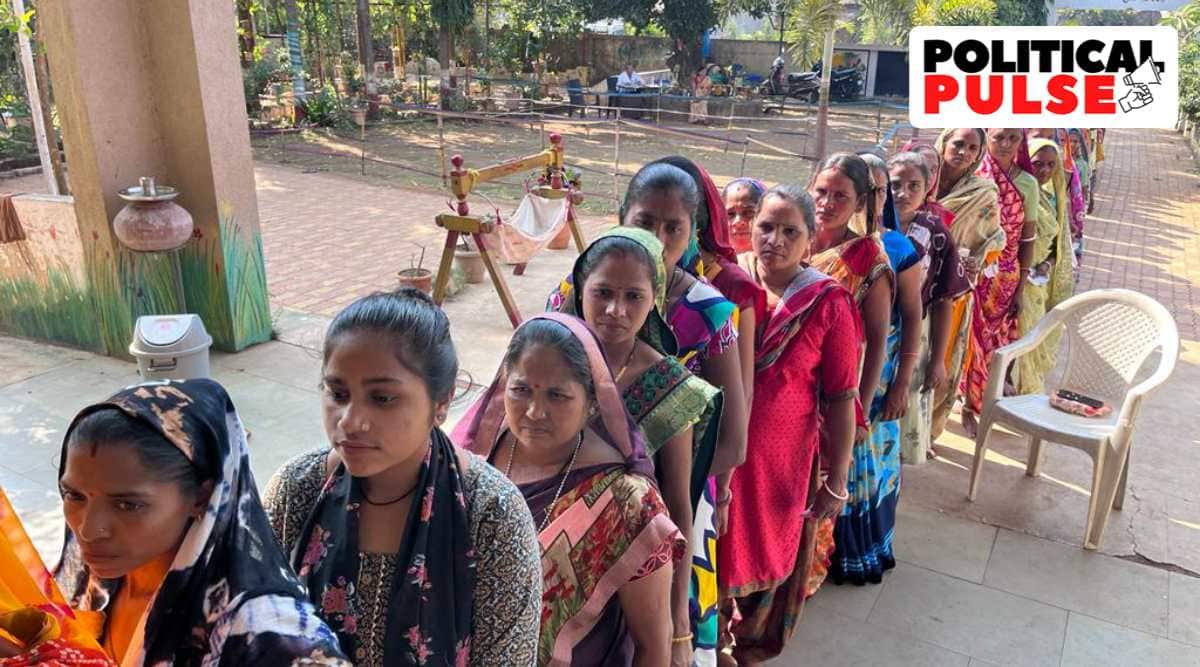 People exercise their voting rights in a district of Gujarat in the first phase of elections. (Express Photo)

While some ascribed the reason to absence of any big issue to polarise voters, the BJP and Congress claimed the other’s voters didn’t turn out at booths.

The constituency that saw the highest polling was Dediapada (81.37%) in Narmada district, an ST reserved seat; while the lowest was in Gandhidham (39.89%), one of the most industrialised regions in Kutch district. In 2017, Dediapada had seen 85.5% voting, and Gandhidham 54.54%.

Over 460 EVMs — which includes ballot units and control units — and 570 VVPATS, had to be replaced on Thursday. (Express Photo)

The fate of 788 candidates is to be decided in the first phase. In 2017, of the 89 seats, the BJP had won 48, and the Congress 38, with Congress allies Bharatiya Tribal Party and NCP winning 3.

Vinod Chavda, BJP general secretary for Saurashtra-Kutch, told The Indian Express that its voters had cast their ballot. “The turnout remained low as there is no popular agitation going on. Last election, social agitations were on and people voted with zunoon (passion). People drove all the way from Surat to their native places in Saurashtra. That polling was against us. But the polling this time is natural. Our supporters came out and voted for the BJP,” he said.

The Congress claimed it were BJP supporters who had not turned up to vote. “The anger which was there in 2017 against the BJP government has only increased as it has done nothing substantial to assuage it. On the other hand, the BJP has not done anything special to make it more attractive to voters. So, traditional BJP supporters didn’t go to polling booths while those angry with the BJP thronged polling booths and voted for the Congress,” claimed Paresh Dhanani, former Leader of the Opposition.

In Dhrafa, villagers boycotted as their demand for separate polling stations for male and female voters was not met, while in Kesar village, the boycott was due to the lack of basic facilities for voting, as per primary information available with the EC. In Samot village, which has 1,625 votes, the boycott was related to a demand for regularisation of encroachments on agricultural land in the village.

Over 460 EVMs – including ballot units and control units — and 570 VVPATS had to be replaced. The CEO said the figures equalled 0.34% of the ballot units, 0.32% of the control units and 0.94% of VVPATs. The EC found “no merit” in complaints regarding bogus voting received on email from Gir Somnath and Jamnagar.

In the morning, the Congress filed a formal complaint with the EC saying EVMs were not working in at least 50 polling booths, mostly in the Saurashtra region. It also complained about electronic channels showing bytes of the BJP which could influence voters. The EC assured that the EVMs had been rectified and appropriate action taken, the party said.

Former chief minister Vijay Rupani, state BJP chief C R Paatil, BJP candidate from Jamnagar (North) Rivaba Jadeja, former Leader of the Opposition Paresh Dhanani, and state Aam Aadmi Party president Gopal Italia were among those who voted early. While Rivaba Jadeja voted in Rajkot, her husband and cricketer Ravindra Jadeja voted in Jamnagar.
AAP’s Italia questioned the slow turnout in the initial hours. “@ECISVEEP If you have to work this way under the pressure of the BJP goons, then why are you holding elections? An average of 3.5 percent voting was done in the entire state but only 1.41 per cent in Katargam. Don’t stoop so low to defeat a small child,” he tweeted.
Voting for the second phase will be held on December 5, and counting of votes on December 8.