Number of woman contestants up from 22 five years ago to 40 this time, but still a small proportion of total candidates 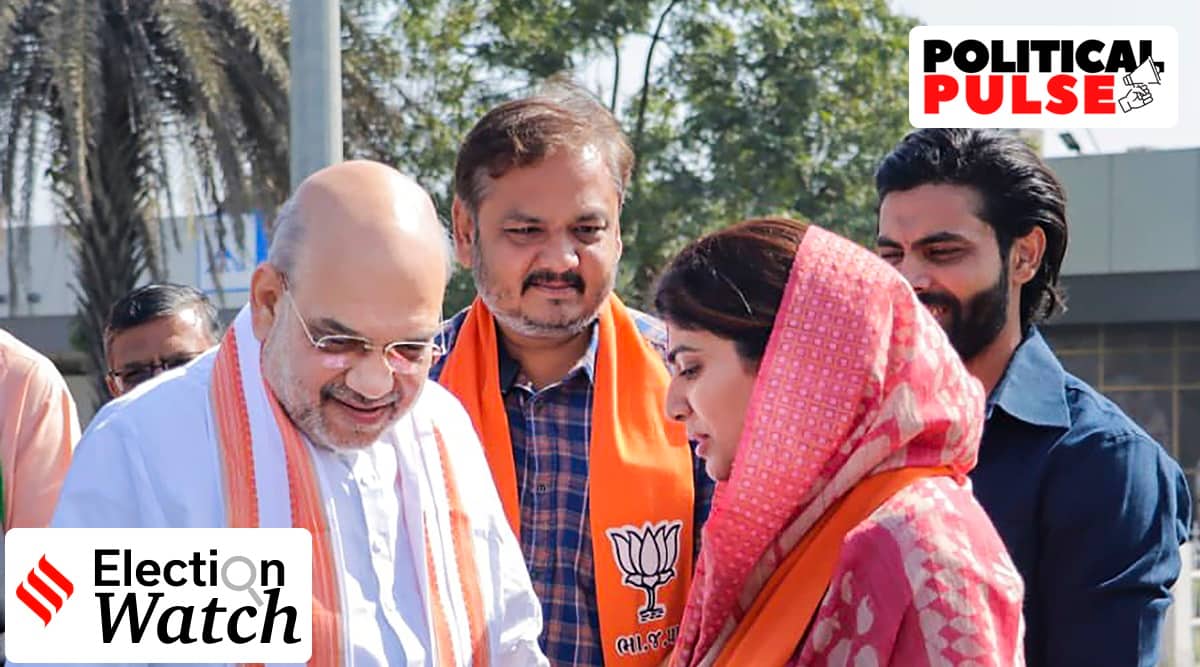 Of the 560 candidates the BJP, the Congress, the Aam Aadmi Party (AAP), and the All India Majlis-e-Ittehadul Muslimeen (AIMIM) have fielded in the coming Assembly elections in Gujarat, only 40 are women. Seventeen of them are from the BJP, 14 from the Congress, seven are AAP nominees, and two of the AIMIM’s 14 candidates are women.

Though more women are in the fray this time, compared to 22 in 2017 and 33 a decade ago, women still comprise a small percentage of the candidates of major parties BJP (9.4 per cent) and Congress (7.7 per cent). The two parties had reduced the number of women candidates in 2017 — the BJP from 19 women nominees to 12 and the Congress from 14 to 10 — compared to five years earlier. This was reflected in the decrease in the number of women legislators in the Assembly from 16 in 2012 to 13 in 2017. All 13 were from the Congress and the BJP.

Gujarat Pradesh Mahila Congress president Jenny Thummar told The Indian Express, “I was expecting at least 35 tickets for women out of 182 total candidates from the Congress.”

With “winnability” taking precedence and several other factors at play, Thummar said the number of women candidates was not at all justified by the parties.

“A total of 92 women in their written requests had asked for tickets. But it depends on surveys, caste equations, and area equations based on which the decision is taken by the high command,” said Thummar, 39, who is the former president of the Amreli district panchayat and the wife of the Congress’s incumbent MLA from Lathi Virji Thummar.

Meanwhile, the BJP initially fielded Jignaben Pandya from Wadhwan constituency in Surendranagar but just before the nomination process for the first phase closed last week, she was replaced with Jagdish Makwana.

Even though the BJP has won Wadhwan since 1990, the party replaced its candidate at the last minute because of the party’s efforts to balance caste equations. Pandya is a Brahmin while Makwana is from the Dalwadi or Sathwara community that is categorised under Other Backward Classes (OBCs). The Sathwaras are found mainly in the districts of Jamnagar, Bhavnagar, Surendranagar, and Junagadh.

“The BJP has lost 13 seats where Dalwadis or the Sathwara community is dominant. In Surendranagar district alone, the community is a deciding factor in Wadhwan and Dhrangadhra,” said a BJP insider.

BJP state vice-president Varshaben Doshi accompanied Pandya to the party headquarters in Gandhinagar as the former candidate submitted a letter declining to contest. She claimed gender was not an issue in this case. Doshi was the sitting MLA from Wadhwan when she was replaced by Dhanjibhai Patel (Makson) ahead of the contest five years ago.

Defending the party, Doshi told The Indian Express, “There are several factors that come into play while deciding a candidate’s name. BJP is the party that not only gave tickets but appointed three of the nine (women) who won the elections in 2017 as ministers and Vidhan Sabha Speaker. Even in the organisation, appointing a woman as vice president is a big thing for a political party.”

But Thummar accused the ruling party of not trusting its women workers even in “safe” constituencies. “The Congress is fighting to come to power but the BJP which is already in power could have taken a risk by fielding women candidates. It is very sad that on the safe seats in urban areas too they did not take the risk.”

BJP state Mahila Morcha general secretary Veena Prajapati disagreed. “Whatever the party decides is good. There is 50 per cent reservation for women in urban local bodies and our women are content and happy,” she said.

Disagreeing with Prajapati, Rajya Sabha MP Amee Yajnik, who has been fielded by the Congress from Ghatlodia against Chief Minister Bhupendra Patel and the AAP’s Vijay Patel, told The Indian Express, “Political parties look at the winnability factor of a candidate. Women empowerment in politics is very challenging. Though this has changed over the years, there should be more representation of women. especially in politics where they can be strong policymakers. There should be some kind of acceptability by society. Rather than thinking about why she is contesting, it should be, ‘why not?’ Society should be encouraging too.”

Sharad Kelkar says Sushant Singh Rajput showed how to transition from TV to films: ‘He set an example for everyone’