Modi the ace for BJP again, as it relies on caste card, adjusts to AAP in Gujarat

After third forces born out of either Congress or BJP, AAP is a novelty in the state. With at least a third of its voters below 40, that could be a factor 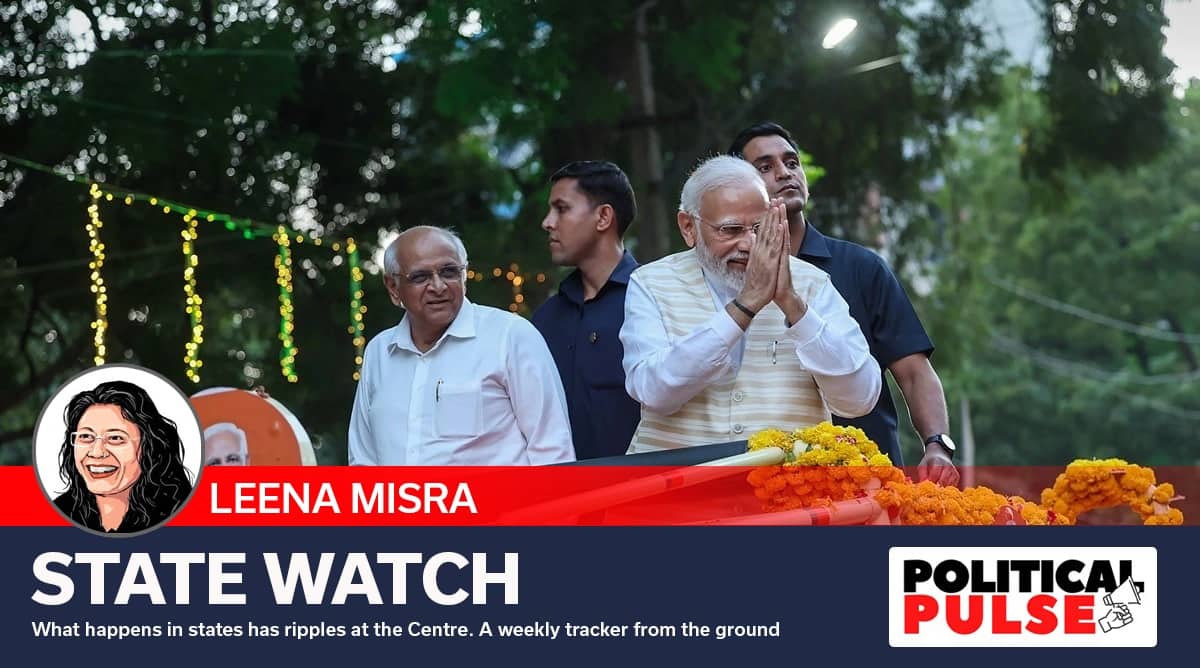 The 2022 Assembly election campaign in Gujarat is turning out to be about two absences – that of Congress leader Rahul Gandhi, whose spree of temple runs and focus on Gujarat had been partly behind the party’s 2017 good showing in the state; and that of a narrative.

In 2017, the elections had come in the wake of the Patidar agitation; in 2012, it was all about voting in Chief Minister Narendra Modi to enable him to make the national leap. In 2022, even the BJP’s gambit, like the others, is getting the caste arithmetic right, with Hindutva a distant second, and with Modi providing that little extra.

The only talking point then is the Aam Aadmi Party, how much it will get, from whom, what will it mean for Gujarat’s two-party politics, and whether its “10 guarantees” will work, which Modi himself has got into the ring to take on, by stirring the whole “revdi” debate.

A political observer underlines how the emergence of AAP is significant. While all former third forces in Gujarat were born out of either the Congress or the BJP, the observer says, AAP has come to the state as “a brand-new idea”, at a time when at least a third of its voters are below 40 years of age and presumably more receptive to change.

Acknowledging the absence of an overarching theme, and that the Patidar stir weighed heavy on the party in 2017, a BJP leader says: “At least there is no negative narrative this time.”

Another adds that while AAP might draw some people, the BJP’s relationship with voters is about an “emotional connect”. “The Congress and AAP are fundamentally political parties, while we are the political wing of an ideological movement,” he says.

While that may or may not be true, the party is taking no chances. Of its 166 candidates declared so far, around 40 are Patidars, distributed between the Kadva and Leuva clans, 12 Kolis, mostly of the Talapada sub-caste, and nominees representing all the major tribes such as the Bhils, Rathwas, Tadvis, Halpatis and Warlis. At least four of these tribal candidates were formerly in the Congress.

In fact, the BJP that gave the slogan of “Congress-mukt Bharat” has fielded at least 17 leaders from the party who defected to the BJP over just the past five years, nine of them having won on Congress tickets in 2017. A BJP leader’s defence is: “We have moved from dark saffron to light saffron over the years. The party that now has a huge presence in the country, is more open to ideas, communities and leaders.”

Modi too has gone the extra mile. The PM, who has been visiting Gujarat frequently, dropped in recently at Rajkot, from where he fought his first election in 2001 and, after a speech laden with nostalgia, met at least three senior journalists from the local dailies and members of three key RSS families. Sources say his office called them for a private audience. He similarly met such RSS old-timers in Vadodara and South Gujarat..

A BJP leader says they are also putting in an effort to secure the rural vote. “Our leaders in the 2017 elections – Jitu Vaghani (the former state BJP president) and Vijay Rupani (former chief minister) – were mostly urban. Current BJP president C R Paatil has a very good understanding of castes. His own constituency in South Gujarat has representation from all communities and castes.”

Union Home Minister Amit Shah, who honed his election-winning skills in Gujarat, has been closely associated with the candidate list and is expected to put his stamp on the party’s manifesto as well, for which the party has called for ideas from the public.

The BJP expects the Modi government’s schemes at the Centre to also help the party. “Till 2014, the narrative was that the Centre was being unfair to Gujarat, but now the mega projects that have been launched will bring in employment. These people (AAP and Congress) may talk about unemployment, but the Supreme Court clearing the EWS quota has made the Patidars happy. They are more concerned about higher education opportunities, which is now a given,” says the BJP leader quoted above.

The party is even projecting that measures such as the crackdown on the drug mafia and demolition of illegal structures – specifically in Bet Dwarka, where several structures owned by Muslims were demolished – are now possible due to the “double-engine sarkar” or, as Modi says, “Narendra-Bhupendra sarkar”.

As part of the BJP campaign, call centres have been set up in districts and Assembly constituencies to take feedback on the schemes of the Centre and state governments.

While acknowledging that AAP can’t be wished away, despite all these measures, a senior BJP leader says the damage will be more to the Congress. “If AAP gets, say, 10% of the vote share, maybe 1.5% might be the BJP’s. Seventy per cent will be from the Congress.”

However, the unsaid belief is that Arvind Kejriwal has an eye on the bigger, national, picture, which is where AAP’s emergence makes the BJP uncomfortable.

Ironically, as veteran BJP leaders put it, the consolation is that the Congress will put up somewhat of a fight. “Even if the Congress does nothing, it will still get 30% of the votes, which are its secure votes,” says a leader.