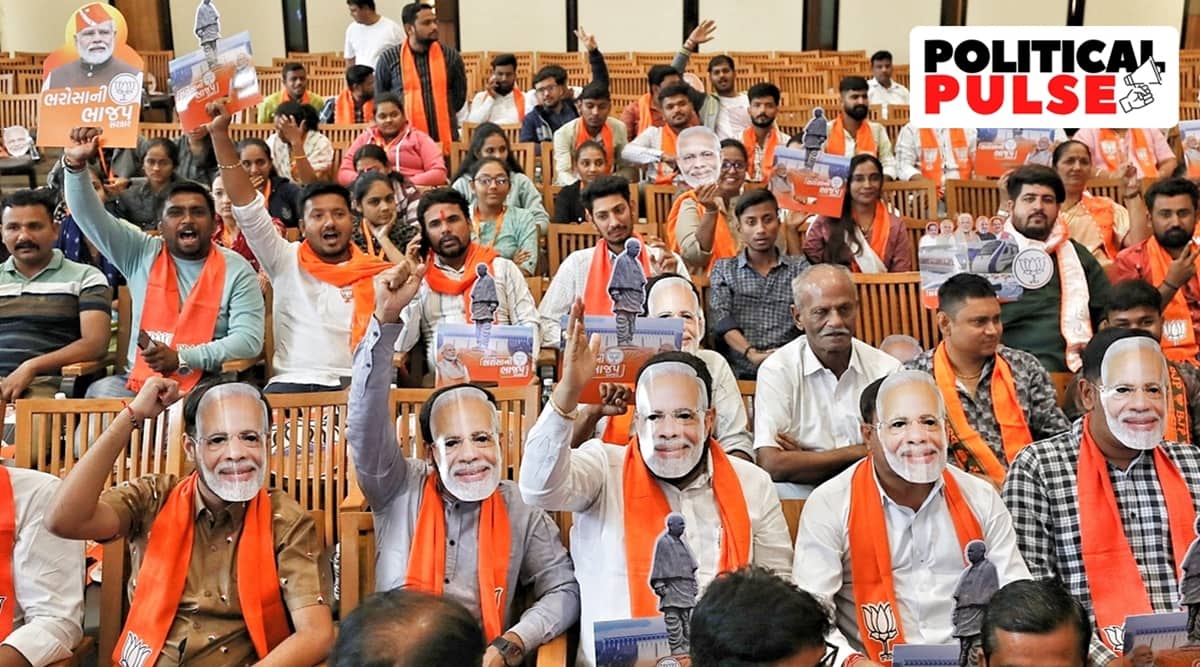 While Prime Minister Narendra Modi has castigated “revdis (freebies)” in the run-up to the Gujarat Assembly elections, the ruling BJP’s manifesto released Saturday has drawn sharp criticism from its Opposition rivals, the Congress and the Aam Aadmi Party (AAP), for its “striking commonalities” with the sops and guarantees promised by them.

While unveiling the manifesto, the BJP’s national president JP Nadda said, “We have done what was promised and we have also done things which were not talked about. So our words have strength… A lot of political parties are making big announcements. Why won’t they do so? They will not come to power and so they can show any type of dreams. But if BJP says something, then it is not said lightly. We make all preparations, do due diligence, make calculations and we recognise the needy and their requirements.” The BJP has also invited “suggestions” from people over its manifesto.

The BJP manifesto titled “Agresar Gujarat Sankalp Patra 2022” pledges to provide free education to girls from kindergarten to post-graduation. This promise mirrors the Congress manifesto released on November 12. The AAP too has promised free education to all children. At a rally at Mahidarpura in Surat’s diamond market Saturday, the AAP candidate from Varachha, Alpesh Kathiriya, charged that the BJP manifesto was a “xerox copy” of the AAP guarantees. “This is not your Agresar (progressive) Gujarat but your peechheyhat (retreating) Bharatiya Janata Party,” he alleged.

Targeting the BJP, Gujarat AAP president Gopal Italia told the Mahidarpura rally, “When we announce our guarantees, the BJP calculates cost and tells us where will you get the money from.”

The BJP manifesto promises to provide free medical treatment by doubling the cap of Pradhan Mantri Jan Aryogya Yojana to Rs 10 lakh from the existing Rs 5 lakh. The Congress has also promised a Rs 10 lakh free medical health cover to all citizens.

While the BJP has promised two free LPG cylinders annually for women under the Pradhan Mantri Ujjwala Yojana, the Congress has pledged subsidised cylinders at Rs 500 per unit. Gujarat Congress spokesman Manish Doshi says, “The Congress manifesto announced well in advance forced the BJP to focus on education and health. Their promises follow ours. In 2012, when we announced the ‘Ghar nu Ghar scheme (promising houses to voters)’ the BJP promised to build 50 lakh houses.”

Doshi pointed out that the BJP manifesto was “silent” on farmer debts, inflation, maritime security and a spurt in economic crimes in Gujarat. The Congress has pledged to write off farmers debt up to Rs 3 lakh each in the state, while the figure promised in this regard by the AAP is Rs 2 lakh. Both the Congress and the AAP have promised electricity to farmers during daytime for irrigation purposes.

As part of their poll pledges, both the Congress and the AAP have promised 300 units of free electricity for people, which the BJP has not done. Similarly, while both the Opposition parties have promised scrapping of the controversial land resurvey carried out by the BJP government, the saffron party’s manifesto remains silent on this matter.

All the three parties have promised assistance for cows and livestock. While the BJP in its manifesto pledges rolling out “Pashu Aadhar cards” and subsidised cattle feed for calves, the Congress has promised Rs 5,000 for every family seeking to buy a cow. The AAP has promised Rs 40 per day for maintenance of each cow in the state.

Must read |For minority voters in Gujarat, more of same on offer; ‘no enthusiasm’ about parties

On the issue of Pakistan Maritime Agency seizing fishing boats of Gujarati fishermen, the BJP has promised to provide new boats to them as replacement, while the Congress announced a Rs 50 lakh package for the boat owners and a control over foreign vessels fishing within 12 nautical miles off Gujarat coast.

India vs New Zealand highlights: Match has been called off