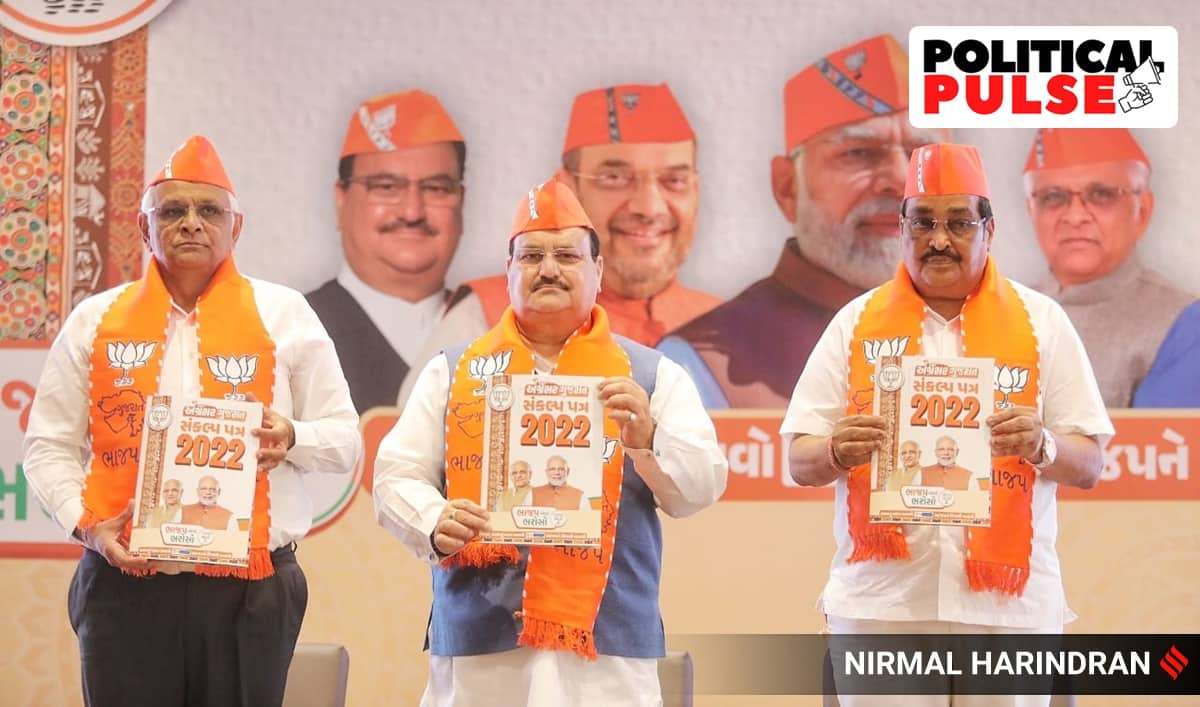 Promising to launch a ‘Gujarat Olympics Mission’ for hosting the Olympic Games in the state in 2036, the Bharatiya Janata Party (BJP) on Saturday unveiled its manifesto for the upcoming Gujarat elections, promising to provide 20 lakh jobs and freebies, including electric scooters and cycles to female students.

The creation of an “anti-radicalisation cell” to identify and “eliminate potential threats and sleeper cells of terrorist organisations and anti-India forces” was among the many promises made by BJP National President J P Nadda while unveiling the manifesto at Gandhinagar.

Elections for the 182-member Gujarat Assembly will be held in two phases on December 1 and 5.

The party also promised to set up a task force to “scrutinize assets and finances of Waqf Board and conduct surveys of madrasas regarding their curriculum”. The manifesto also promised rigorous imprisonment along with a financial penalty for forced conversions under the Gujarat Freedom of Religion (Amendment) Act, 2021.

The party also promised to enact the Gujarat Recovery of Damages of Public and Private Properties Act. This legislation is meant to recover damages done to public and private properties by anti-social elements during riots, violent protests and unrest, etc.

Among the freebies announced in the manifesto, BJP promised to provide free sanitary napkins to female students, free monthly supplements of nutrients to all poor and pregnant women from the economically weaker section (EWS), two free LPG cylinders every year and free bus travel for women senior citizens.

Advertisement
BJP workers seen at the function to mark the release of the party manifesto for the upcoming Gujarat state assembly elections in Ahmedabad, Nov. 26, 2022. (Express photo by Nirmal Hariharan)

The BJP said it would double the cap under Pradhan Mantri Jan Arogya Yojana (Ayushman Bharat) from Rs 5 lakh to Rs 10 lakh per family and “ensure free-of-cost medical treatment”. The party will also launch a ‘Mukhyamantri Free Diagnostic Scheme’ with a corpus of Rs 110 crore, to provide “free-of-cost diagnostic services in all government health institutions and empanelled laboratories for EWS households.”

The party promised to provide 1 litre of edible oil four times a year and 1 kg ‘chana’ per month at subsidised rates through the Public Distribution System.

The BJP also promised to make Gujarat the top FDI destination by attracting Rs 5 lakh crore of overseas investments in the next five years. It also plans to make the state a defence and aviation hub of India. Gujarat Chief Minister Bhupendra Patel and BJP state president C R Paatil were also present at the launch of the manifesto.

Jignesh Mevani interview: ‘People have lost spark to even aggressively react against BJP govt … They’ve not been able to speak due to oppression’