Over the years, falling seats, but nearly half the votes still for BJP in Gujarat

With vastly better showing, Cong ended up 22 seats and 7%-plus votes behind BJP; this time the X-factor is AAP 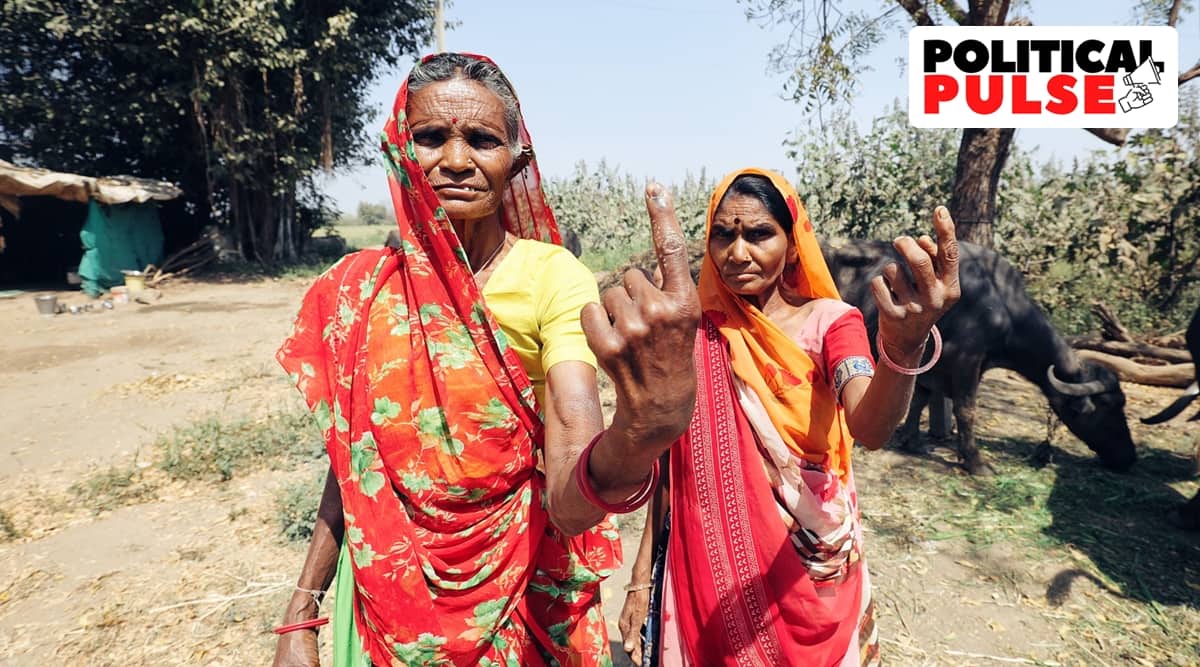 Like this time, Assembly elections were held in Gujarat in two phases in 2017 and 2012 as well. (Express file photo by Nirmal Harindran)

On Thursday, the Election Commission announced the poll schedule for the Gujarat Assembly elections, to be held on December 1 and 5, with 4.9 crore voters casting their ballot. The results will be declared on December 8, along with Himachal Pradesh, which votes on November 12.

Like this time, Assembly elections were held in Gujarat in two phases in 2017 and 2012 as well.

Also in Political Pulse |In Gujarat, AAP may be more sound than action, but it has got BJP’s attention

The BJP saw its number of seats drop to its lowest tally since 1995 last time, winning 99 of 182 seats. The Congress got 77 seats. However, the BJP, which has been in power in Gujarat for 27 years, still got nearly 50% of the votes (49.05%), while the Congress ended with 41.44% of the votes. It was also the first election when the BJP fought without Narendra Modi at the helm since he first became chief minister in October 2001. 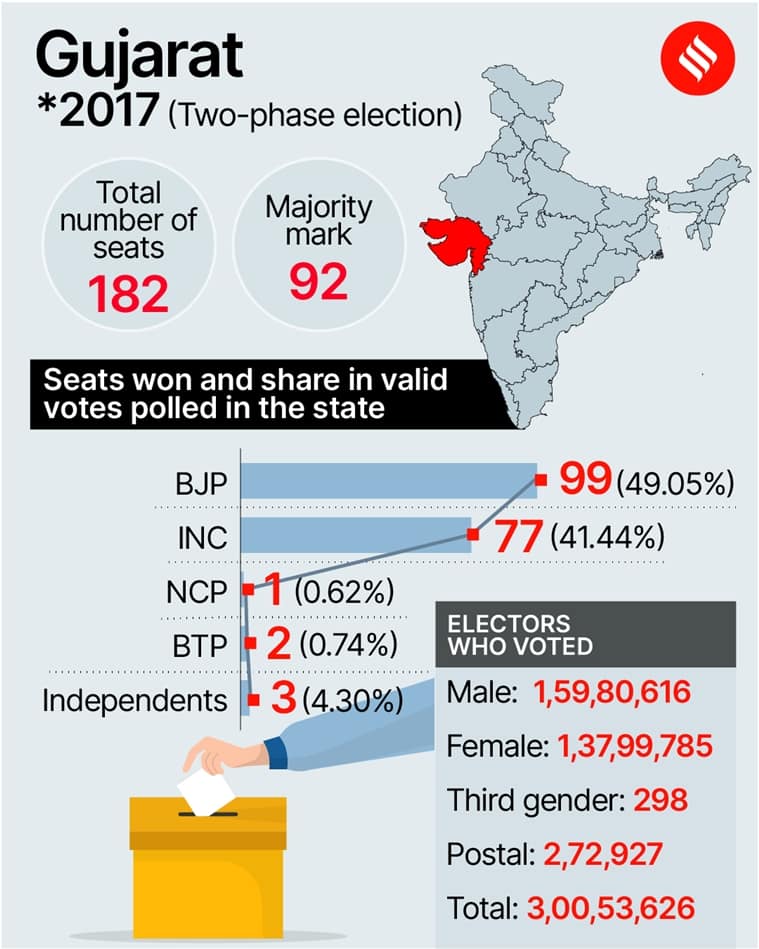 How BJP, Congress and other parties fared in the 2017 Gujarat elections.

One significant change from 2017 is the presence of the Aam Aadmi Party (AAP), which is threatening to give both the BJP and Congress a strong contest and is expected to cut into the Congress votes. In 2017, apart from the big two, there was virtually no other party in the race, with Independents (3 of whom won) getting more votes than the NCP and BTP, which picked up 1 and 2 seats respectively.

Some smaller parties like the Bharatiya Tribal Party, AIMIM and NCP are also likely to field candidates in some constituencies.

While the number of seats the BJP won dropped in 2017 compared to 2012, it actually got more votes. In 2012, when Modi was still CM, the BJP had won 115 seats and 47.85% votes. The Congress tally was 61 seats and 38.93% votes, indicating the huge jump the party would make five years later, largely on the strength of the Patidar quota agitation against the BJP government. In 2012 too, the two parties had virtually no third competitor. 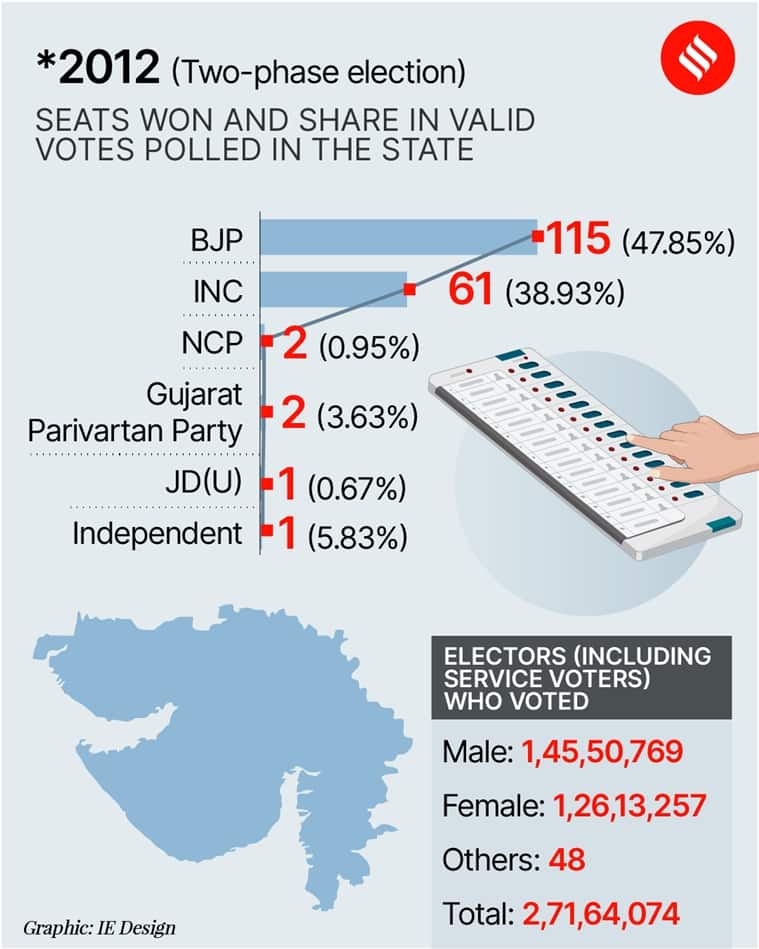 How BJP, Congress and other parties fared in the 2012 Gujarat elections.

AAP did not register a presence in the 2019 elections.

The BJP is bracing for strong anti-incumbency this time, as it seeks a sixth straight term, with jury still out on how replacing the entire government of Vijay Rupani with an almost inexperienced Bhupendra Patel Cabinet will help beat that.

The BJP first came to power in Gujarat in 1995, against the backdrop of the infamous rebellion of Shankersinh Vaghela against the Keshubhai Patel government. While Vaghela’s rebellion fizzled out and Keshubhai returned to power, he was momentously replaced with Modi by the BJP high command in 2001, following the criticism faced by the state government after the massive earthquake that flattened large parts of Gujarat.

Modi’s and the BJP’s complete control over the state followed when the party swept the 2002 Assembly elections, held in the wake of the Sabarmati Express fire and the Gujarat riots, winning 127 of the 182 seats (49.8% votes). Till date, this remains the best performance of the BJP in Gujarat. The Congress was reduced to 51 seats.

In 2007, the BJP under Modi returned to power despite several senior leaders like Gordhan Zadaphia parting ways. Zadaphia was the Minister of State for Home during the 2002 riots. The BJP tally fell only marginally, to 117 seats (49.12% votes), against the Congress’s 59. The 2012 elections also saw the BJP hold on to its lead, with 115 seats, with the Congress climbing just two more, to 61.

In 2014, Modi moved to Delhi as PM, and the reins of the Gujarat government were handed over to his confidante Anandiben Patel. Since then, the state leadership has struggled to fill Modi’s shoes, with a series of CM changes. Following the 2015 quota agitation, Anandiben was replaced with Vijay Rupani as CM – a year to go for the 2017 polls.

In those elections, the BJP came down to 99.

The Congress surged to 77 but is now down to 62 in the Assembly after a series of defections – its lowest in the House. As elections approach, it has been fighting a listless battle, with big leaders still to take charge and AAP stealing the Opposition space.

As Arvind Kejriwal makes aggressive forays into Gujarat, while pitting himself directly against Modi, the space for a third front seems already taken by AAP. It’s quite a turnaround considering that in 2017, all 29 candidates fielded by AAP lost their deposits.

A fourth party in focus is the Asaduddin Owaisi-led AIMIM, which will fight its first-ever Gujarat polls and has announced candidates so far in five seats.

– With inputs from Sohini Ghosh, Ahmedabad