The key question: why did the change-seekers -- they ended up being around 45% -- not look at the Congress as the alternative, in a state traditionally bipolar? The BJP was expected to retain Gujarat and the Prime Minister pulled out all the stops. (Express photo Tashi Tobgyal)

The verdict on December 8, 2022, has given a fillip to Prime Minister Narendra Modi for the battle that lies ahead in 2024.

With a historic win in his home state Gujarat, his position is even more invincible. Just a division of the Opposition votes doesn’t explain the surge — the BJP won more seats by getting more than 50% of the votes (53%), upping its vote share by 4%, despite being in power for 27 long years. That’s no mean achievement — and calls for deeper study.

Must Read |BJP’s tale of contrasts: Why Gujarat strategy clicked, but Himachal did not

But the 2022 story isn’t so much about the BJP. It was expected to retain Gujarat and the Prime Minister pulled out all the stops. The story is more about the caving-in of the Congress in another big state of India — and, by so doing, strengthening the BJP on the road to 2024.

It is hardly a secret that when the Congress has lost big states – Uttar Pradesh, Bihar, West Bengal, Tamil Nadu, or Andhra Pradesh and Telangana, in what was a unified Andhra Pradesh, which catapulted the party to power in 2004 — it has not been able to regain any.

Himachal Pradesh may provide some relief to India’s grand old party — it finally won a state after 2018 — but at the end of the day, it is a consolation prize. It sends just four MPs to the Lok Sabha seats. However, it needs to be said, though, that the Congress’s victory in Shimla and the AAP’s in MCD show that it’s possible to get the better of the Modi magic if there is a fightback and a compelling narrative.

A question that cannot be wished away is this: why did the changeseekers — and there were many in Gujarat who talked about “badlav” and they ended up being around 45% — not look at the Congress as the alternative, in a state that has been traditionally bipolar?

Must Read |Gujarat elections: How BJP’s historic win was helped by Modi juggernaut – and a failing Congress and over-ambitious AAP

Why did so many urban voters not come out to vote? There was a decline in voter turnout essentially in the urban centres this time, a base that has traditionally backed the BJP. If disenchanted with the BJP, why did they not look at the Congress as an option? The Congress was out of power and did not suffer from anti-incumbency. And it has been a party of “raaj kaaj (governance)”.

Why did 13 per cent of the voter, no small a number, choose to look at a political newbie? Was it only for “freebies”? Surely, many of them knew that by voting for the AAP, which was starting from scratch, they might even be wasting their vote. But they wanted to provide the AAP the springboard to pose a real challenge next time.

Should Read |For AAP, well begun is half done in Gujarat

In Gujarat, the Congress was mauled in its traditional bastions: the tribal belt, which had been nurtured over decades by legendary leaders like Jinabhai Darji who knew every constituency and had the names of party workers on his fingertips. This time, nine of 10 tribal seats have gone to the BJP. The BJP has also won nine out of 10 of the Patidar seats. It was the Patidar agitation for job reservations that brought the Congress close to power in 2017, giving it 30 seats in Saurashtra and Kutch (out of 54). Today it is down to 3, and the BJP up to a whopping 46.

The Congress could not keep the young leader of the Patidar andolan, Hardik Patel, who was one of its stars last time, in the party or put his services to good use. He joined the BJP, and won.

The Congress, with an established presence in Gujarat, was the natural beneficiary of disaffection in the state. That the BJP brass changed Chief Minister Vijay Rupani and his entire cabinet overnight, just over a year ago, showed they were aware of growing anti-incumbency and wanted to signal a break from the past.

And yet, instead of being the gainer of unhappiness in Gujarat, it is the Congress which has lost out the most. Consider, for a moment, what could have happened if there was a reversal of positions in 2017 — if the BJP had won 77 seats and the Congress had bagged 99.

Within an hour, the BJP would have called a meeting of its top leaders to put in place an action plan for winning the state back in 2022, and followed it through, step by step, just as it did in defusing the Patidar anger over the last five years.

Even as voting was ending in Gujarat on December 5, Narendra Modi had summoned a meeting of the party office-bearers and senior leaders to look ahead at 2024.

In 2012, I recall, Modi had just won the election again as CM, and excited party workers were waiting for him to arrive at the party office in Ahmedabad to celebrate. There was beating of drums and distribution of sweets. But Modi headed straight to rival Keshubhai Patel’s house.

Keshubhai, a renegade, had launched his own Gujarat Parivartan Party so as to defeat Modi in the election. And yet, Modi, armed with sweets, went to get Keshubhai’s “blessings”. His gaze was already set on the bull’s eye. Posters had gone up in the city about Modi as the future PM. There was not a moment to lose, and he had to get the state – and the powerful Patidar community – behind him.

It is this will to power that the Congress has lost. Had it even contained the BJP to the 2017 levels, it would have made it difficult for Modi to mount a momentum for 2024, which Gujarat has now ensured. Of course, states which go to the polls in the winter of 2023 — Telangana, Rajasthan, Madhya Pradesh and Chhattisgarh – will also set the tempo for the general elections a few months later.

Forget building on its successes of five years ago, the Congress, if truth be told, had given up on Gujarat before the battle began. Barring a few candidates, like Jignesh Mewani who fought spiritedly, the party looked jaded and downbeat this time. Many Congress leaders felt abandoned. It’s as if no one was in charge.

Arvind Kejriwal, on the other hand, chose to concentrate his fire on Gujarat instead of Himachal Pradesh. He decided to enter the lion’s den and take on Modi, so as to position his party as the entity which would ultimately give a fight to the BJP — and replace the Congress.

The signal in Gujarat was clear — that the Congress had given up on the state. And the message went not only to the party workers, but also to the “aam janata”. That challenging the BJP and Modi where they are the strongest — is too daunting a challenge. That’s why the Gujarat outcome has implications not just for the Congress but for the entire Opposition. 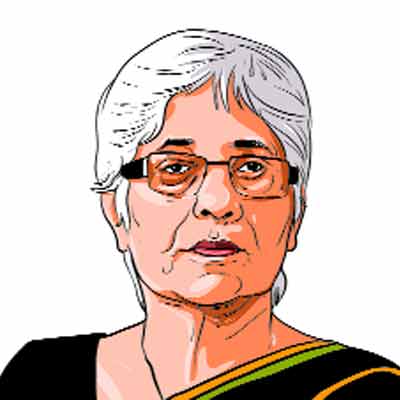