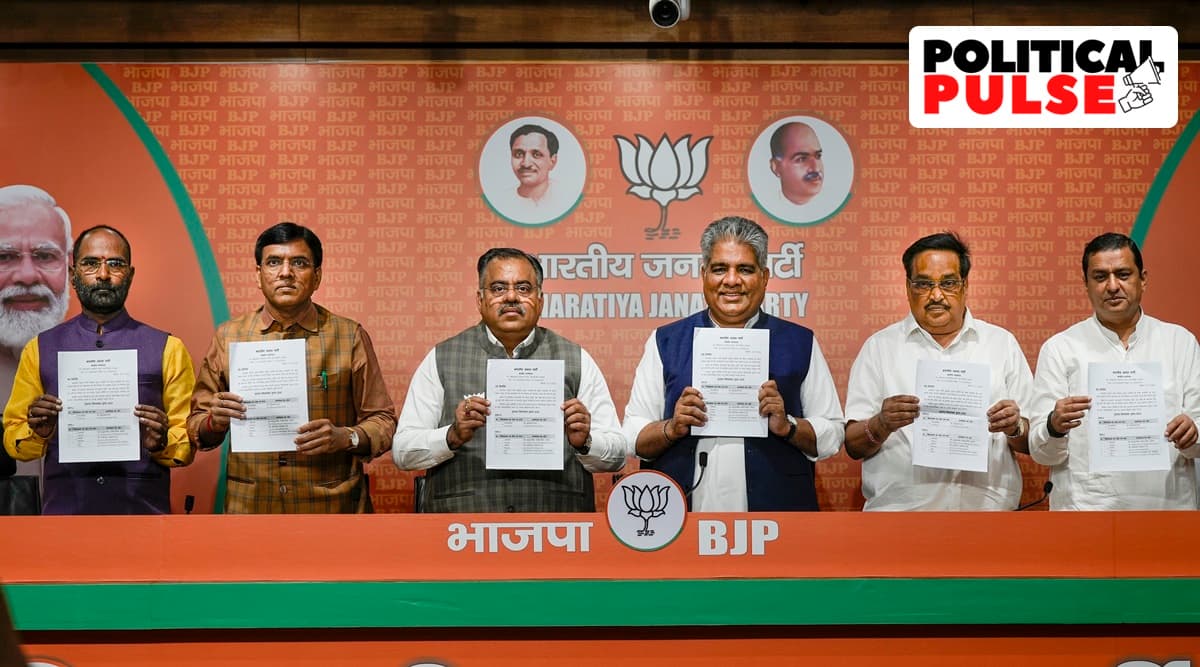 Unveiling its first list of 160 names for the Gujarat Assembly elections Thursday, state BJP president C R Paatil called it a “generational shift”. But while 38 sitting MLAs were dropped, including six senior leaders who were part of the Vijay Rupani Cabinet, the list was more notable for the additions it made – including a leader whose name came up during the row over the remission of sentences of Bilkis Bano convicts, Hardik Patel and at least 30 other Patidar candidates, the wife of cricketer Ravindra Jadeja, and many leaders who just crossed over from the Congress, some as recently as Wednesday.

BJP Gujarat in-charge Bhupender Yadav announced the list in New Delhi in the presence of Paatil, Union minister Mansukh Mandaviya and the party’s national general secretary, Tarun Chugh. Yadav underlined that out of the 160 candidates declared, 13 are from Scheduled Castes and 24 from Scheduled Tribes (though all from reserved seats), while 14 are women. On these 160 seats, 69 sitting MLAs have been repeated whereas 38 have been changed, he said. At least 17 are Congress MLAs who defected to the BJP over the past five years, nine of them having won on Congress tickets in 2017.

Also in Political Pulse |The lightness of being Nitin Patel

“The BJP usually changes 20% of its MLAs. In an electoral democracy, change is necessary, otherwise it will lead to stagnation. We have given tickets to several youngsters. This list shows a generational shift in the Gujarat BJP,” Paatil told PTI.

A day before the list was announced, the way was cleared when seniors such as Rupani, his deputy CM Nitin Patel and at least four other ministers from his Cabinet (Pradeepsinh Jadeja, Bhupendrasinh Chudasama, R C Faldu and Kaushik Patel), announced that they had opted out of the contest. Some sent letters to Paatil declaring the same.

In Premium |Saurashtra, factionalism in BJP: Why Vijay Rupani is out of Gujarat

Asked why these senior leaders were not contesting, Paatil said: “They voluntarily decided not to fight. They all have occupied top posts, including that of CM and Deputy CM. So now they want to work for the organisation.”

While Hardik, who will be contesting his first election (from Viramgam), is the most notable Patidar in the BJP list, there are other prominent names from the community – particularly Ramesh Tilara (Rajkot South), who is a trustee of the Shree Khodaldham Trust, whose head Naresh Patel was being wooed by all parties. Incidentally, the Surat convenor of the trust, Dharmik Malaviya, is contesting on an Aam Aadmi Party (AAP) ticket from Surat.

On the ticket to cricketer Ravindra Jadeja’s wife Rivaba, from Jamnagar North, Paatil said: “Rivaba has been actively working for the party in the constituency. All tickets have been given on the basis of winnability.”

The list of those dropped includes Brijesh Merja, who had won from Morbi last time, and is a minister in the Bhupendra Patel government. The BJP has gone back to its veteran from the seat, Kanti Amrutiya, whose videos had surfaced rescuing those who fell into the water following the bridge collapse on October 30. The party is clearly expecting the change to help it fight the fallout from the 130-plus deaths.

Must Read |Packing a punchline: Why Modi’s ‘We Built this Gujarat’ has a familiar ring

Bhupendra Patel, who has the endorsement of the top two in the BJP (Narendra Modi and Amit Shah), as the CM face – the party broke from practice to name him – will be contesting from Ghatlodia again. He had won the seat last time with the highest margin of the election.

His ministerial colleague Purnesh Modi has been repeated from Surat West, though his primary portfolio had been stripped in August. Rajendra Trivedi, the other minister who was downsized, though, has been dropped.

Opinion |In Gujarat polls, a jittery BJP takes on a pugnacious AAP

Another leader re-fielded is Godhra MLA C K Raulji, a six-term legislator, who joined the BJP in 2017 after quitting the Congress. Raulji was part of the Godhra Jail Advisory Committee that granted remission to 11 convicts in the Bilkis Bano rape and murder, and had referred to the released convicts as “Brahmins with good sanskar”.

Dalit religious leader Shambhuprasad Tundiya has been given the ticket from Gadhada constituency, dropping Atmaram Parmar. Former minister Shankar Chaudhary is the BJP candidate from Tharad of Banaskantha district. In 2017, Chaudhary had contested from Vav constituency of Banaskantha and lost to the Congress’s Geniben Thakor.

In Ahmedabad, Jitendra Patel alias Bhagat has got the ticket from party bastion Naranpura, whereas former MLA Bhushan Bhatt and former standing committee chairman of Ahmedabad Municipal Corporation Amul Bhatt have been given party tickets from Jamalpur-Khadia and Maninagar constituencies respectively.

The Bahubali MLA from Waghodia constituency, Madhu Shrivastav, has been dropped and replaced by Ashwin Patel. Shrivastav has threatened to contest as an Independent.

Also out is the sitting MLA from Matar in Kheda, Kesrisinh Solanki, who was listed as an accused in the October communal clash in Undhela village. Kalpesh Parmar has been given a ticket from this seat.

In Bharuch, sitting MLA Dushyant Patel has been dropped and replaced by Ramesh Mistri.

State Watch |In Gujarat, AAP may be more sound than action, but it has got BJP’s attention

Koli strongman and a leader of the fishermen community, Parshottam Solanki, and his brother Hira Solanki have got tickets from Bhavnagar Rural and Rajula constituencies.

In the prestigious seat of Rajkot West held by Rupani currently, the BJP has fielded Dr Darshita Shah. Whereas, on another BJP bastion Mehsana, so far held by Nitin Patel, the party has fielded Mukesh Dwarkadas Patel.

In Thasra, former MLA Ramsinh Parmar’s son Yogendra has been given a chance. Parmar, Chairman of Amul Dairy, had joined the BJP from the Congress in 2017.

A senior party leader said that the emphasis of the high command seems to be on selecting those candidates who have worked in the organisation and have experience of administration at the local level.

However, the BJP list also includes a number of Congress leaders who only recently joined the BJP.

Like tribal MLA Ashwin Kotwal, who resigned from the Congress in May, and has now got the BJP ticket from Khedbrahma (ST) seat. And Rajendrasinh Rathava, who just two days ago resigned from the Congress along with his father, veteran tribal MLA from Chhota Udepur Mohansinh Rathva. Rajendrasinh has got the BJP ticket from his father’s seat.

Another Congress turncoat, Ahir community leader and sitting Talala MLA Bhagwan Barad, who resigned just Wednesday from the party, has been fielded by the BJP from his seat.

On AAP’s entry in Gujarat, Paatil said “there is no triangular contest in Gujarat”. “The fight is between the BJP and Congress. AAP is not a challenge for us. At best, it will cut votes of other parties and will eventually benefit the BJP.”