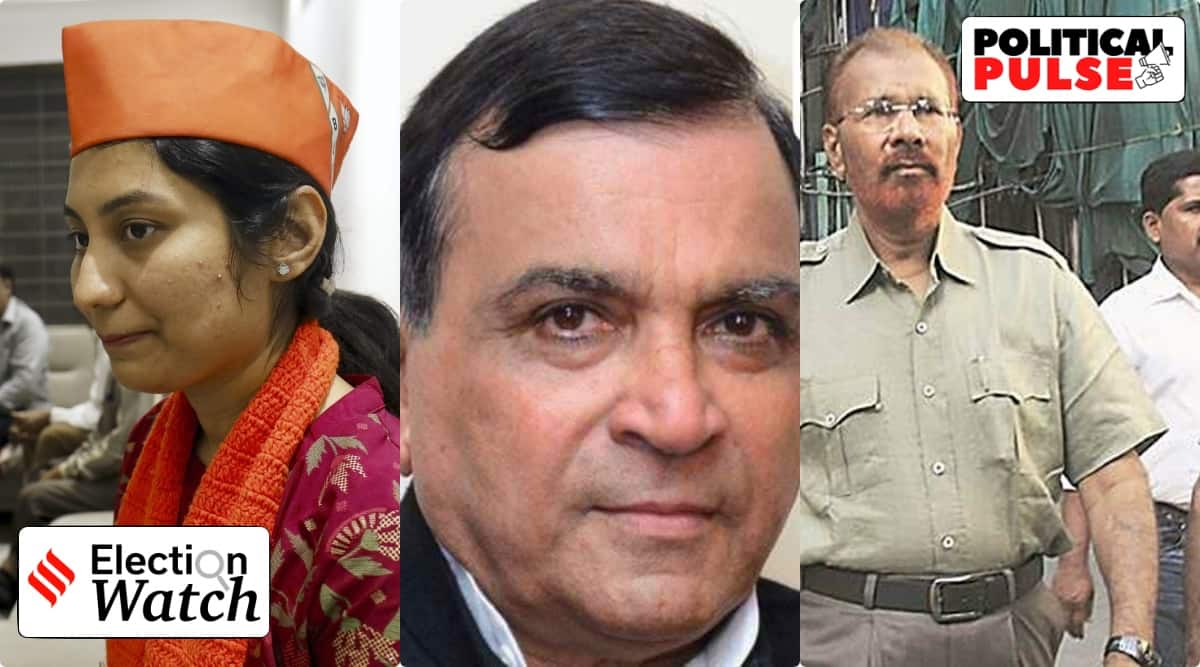 Twenty years on, the 2002 Gujarat riots continue to figure in the coming Assembly elections, in both the candidates and issues in the fray — or in their absence.

While the BJP has repeated the MLA who was part of the committtee that recommended the early release of convicts in the Bilkis Bano gangrape and murder case, the outrage outside over it has found little echo on the ground.

The BJP has also fielded the daughter of a convict in the Naroda Patiya massacre – in which over 90 were killed on February 28, 2002 – with the party’s only leader to be tried for the violence present to witness the nomination.

On the other side is the star witness in the Gulberg Society massacre during the riots, who has been trying hard to make an electoral debut for a couple of years. Somewhere in the middle is a former police officer who shot to limelight for alleged encounters related to the riots.

The 29-year-old MBBS graduate is the daughter of Manoj Kukrani, who was convicted in the Naroda Patiya massacre that saw 96 deaths, all being Muslims, and is now out on bail. Maya Kodnani, the former Gujarat minister for women and child development, who was acquitted in the Naroda Patiya case but is still undergoing trial in Naroda Gam – and who is out on bail on medical grounds – accompanied Payal to her nomination filing.

Naroda Gam, like Naroda Patiya, is part of the Naroda Assembly constituency.

The BJP dropped its sitting MLA (one of 48 to be dropped), Balram Thawani, to accommodate Payal from its Naroda bastion. Thawani had won last time by a margin of over 60,000 votes.

Naroda has, in fact, always voted in the BJP handsomely – Kodnani herself won by a margin of over 1 lakh in 1998 and 2002 polls, increasing this to 1.80 lakh-plus in 2007. Nirmalaben Wadhwani of the BJP won in 2012 by a margin of around 58,000 votes. Wadhwani, like Kodnani, is an obstetrician and gynaecologist, and also went on to become the minister of women and child development. The Congress last won from Naroda in 1985.

Thawani, who was denied a ticket by the BJP, told The Indian Express: “I was told by the party that the plan was to field a woman candidate from the seat this time. She (Payal) is like my daughter, because she has grown up with my daughter. I will be campaigning for her with all my energy, and will ensure that she wins by a margin greater than 80,000-90,000.”

Advertisement
Must Read |With two sacks of Re 1 coins worth Rs 10,000, an Independent files nomination from Gandhinagar (North)

Thawani adds that the party has given him overall responsibility of the ward, including booth management, and he is accompanying her in daily rounds of the constituency. With the Sindhis the dominant community in the constituency – it also has a significant number of people originally from Rajasthan – the BJP has always fielded a Sindhi from here since 1995 (Kodnani, Wadhwani, Thawani and Kukrani are all Sindhis).

Muslims are absent in their campaign rounds. “They don’t vote for us,” says Thawani.

On the fact that Payal’s father is a riot convict, Thawani says this is not an issue. “The media may publish whatever it wants, but people here know and remember the truth. The FIR was lodged 90 days after the event, upon instructions from (former Congress president) Sonia Gandhi, and the public here is smart enough to remember that it was a motivated allegation. In fact, I remember that the Kukrani family was not even in the city at the time. Moreover, Payal was only a child (9 years old) at the time.”

The MLA who was in the Jail Advisory Committee that cleared the remission of Bilkis Bano convicts, and was later quoted as calling the men “sanskari Brahmins”, has been renominated by the BJP from Godhra. Unlike Thawani, who was dropped despite his thumping 2017 win, Raulji, 68, got lucky as his victory margin last time was the second-lowest of the election in the state — 258 votes.

Raulji was among the Congress leaders who defected to the BJP ahead of the 2017 Rajya Sabha elections.

In its manifesto, the Congress has promised to revoke the remission of the 11 Bilkis Bano convicts, if it comes to power. However, no other Opposition party, particularly the Aam Aadmi Party that is making a bid for power in Gujarat, is making it an issue in the elections.

The Gulberg Society massacre remains one of the most well-known incidents of the 2002 riots, with its survivor Zakia Jafri seeking trial of then chief minister and now Prime Minister Narendra Modi for the violence in the state, till this year – when she lost in the Supreme Court. Among those who died in the violence in the heart of Ahmedabad city was Jafri’s husband and former Congress MP Ahsan Jafri.

Pathan, 45, was one of the star witnesses in the trial that led to the conviction of 24, and now stands in appeal before the Gujarat High Court. In the coming elections, Pathan is contesting from the Bapunagar seat on a Janata Dal (United) ticket, after resigning from the AIMIM saying it had refused to field him.

Advertisement
In Premium |Frying samosas and pakodas to shaking a leg, a Punjab touch for Gujarat AAP campaign

Pathan, who first declared his electoral ambitions in 2019, says: “As a victim of such heinous riots, I know I can be an effective voice for the Muslim community in the Vidhan Sabha. I have Hindu friends and they are helping and encouraging me to take my political dream forward. But elections, it seems, are money-oriented. I was rendered penniless in the riots and the situation has not changed even 20 years later. I have nothing to my name,” says Pathan.

Pathan says he decided to take the dive into politics as there was no voice in Gujarat raising Muslim issues, including the Congress and its late leader Ahmed Patel.

Pathan first contested as a candidate of the Apna Desh Party, an Uttar Pradesh-origin outfit, from the Lok Sabha constituency of Kheda in Central Gujarat, in 2019. He came in fourth, getting 4,800 votes, with the BJP candidate winning with 7.14 lakh votes.

Pathan then joined the AIMIM just ahead of the 2021 local civic body polls. The party for the first time won in the Ahmedabad Municipal Corporation, getting 7 seats. Pathan says the Muslims supported the AIMIM hoping it would be a voice of the community, but that he was “disillusioned”.

“I joined the party seeing the qualifications of Asaduddin Owaisi (the AIMIM chief). He is a barrister, an educated man, who has raised issues affecting us and the injustices against us in Parliament. So, I had hope. But the Gujarat leadership of the AIMIM is opaque. I wanted to meet Owaisi sahab to explain how I could win if fielded, given that I have been a victim of the riots. But the meeting was never arranged by the Gujarat leaders. They have formed a coterie and decide what information or who can reach Owaisi sahab,” Pathan says.

Must Read in Political Pulse: |‘Missing’ candidate row: On seat in question, Surat (East), AAP has failed to make a dent

He resigned from the party the same day as he filed his nomination papers from Bapunagar as a JD(U) candidate. In 2017, the Congress’s Himmatsinh Patel had won the seat by a margin of around 3,000 votes.

The AIMIM has so far fielded 14 candidates across Gujarat, of them five in seats falling in Ahmedabad. None is contesting from seats which saw the major massacres of 2002.

A retired IPS officer, he is one of the most controversial cops of the state, having a quick rise during the Modi years as the Ahmedabad Crime Branch DCP, and as swift a fall after his name came up in a slew of alleged extrajudicial killings.

Discharged in at least three cases of alleged encounters – the Ishrat Jahan encounter case of 2004; the Sohrabuddin Shaikh case of 2005; and the Tulsiram Prajapati case of 2006 – Vanzara has thrown his hat too in the electoral ring. He has launched a Praja Vijay Paksh and fielded candidates in 38 of the 182 seats across the state. He, however, is not contesting, saying that he “does not want to focus on just one seat” and would rather “focus on all the 38 seats and campaign for all the candidates”.

There is no clear pattern as to how the 38 seats were chosen. However, it is not clear yet if his candidates can contest on his party ticket, or would have to fight individually. Vanzara submitted a swastika, a mace and a star for party symbol, which has not been accepted by the EC.

Vanzara, 68, says he took the plunge because of “the circumstances he faced during his career” and will contest on the plank of “rajsatta (political power)” and “dharmasatta (spiritual power)”.

Speaking with The Indian Express, Vanzara talks of “fear all-around of those in power”, “rampant corruption” owing to “the absolute reign of the BJP in Gujarat for the past 27 years”.

While quipping that “the ultimate objective of any political party is to be in power”, Vanzara refuses to confirm or deny whether this could mean an alliance with the BJP.

On the early release of convicts in the Bilkis Bano case, Vanzara says: “It has been done as per legal procedure…There is a rule of law in the country and for anything that has to be done, there are legal procedures. My clean chit was also through legal procedure.”

Vanzara continues to maintain, like he has done from the beginning, that none of the encounters he was involved in was fake, and said he had only killed terrorists “who had come to kill politicans” to destroy the peace in the state.

The former Ahmedabad mayor and city BJP president has been fielded from Ellisbridge, a BJP bastion. The BJP dropped two-term MLA Rakesh Shah to give the ticket to Amit Popatlal Shah.

Ellisbridge is interesting for being the one-time bastion of the late Gujarat minister of state for home Haren Pandya, whose assassination in March 2003 was probed by the CBI and eventually concluded as a reprisal killing for the 2002 riots.

Recently, Pandya’s wife Jagrutiben objected to Rakesh’s claim that while under the late leader, the BJP would win 66% of the votes in Ellisbridge, this was now up to 80%. Jagrutiben, who fought for a long time for “truth” behind Pandya’s killing, wrote to BJP Gujarat president C R Paatil demanding that Rakesh withdraw his statement, and calling it “unbecoming, made out of jealousy, that attempts to rake up the unfortunate incident (of her husband’s murder)”.

In 2012, Jagrutiben herself had unsuccessfully contested on a Gujarat Parivartan Party (GPP) ticket from Ellisbridge, but ranked third with 9,000-odd votes. The GPP was set up by the late Keshubhai Patel, who eventually joined the BJP. In 2016, the Gujarat government appointed her chairperson of the Gujarat State Commision for Protection of Child Rights.

Autumn of the patriarch: As Farooq Abdullah bows out, party says he remains tallest leader of Valley