Sonia meets Kamal Nath after Kharge & Maken brief her on developments in Jaipur. 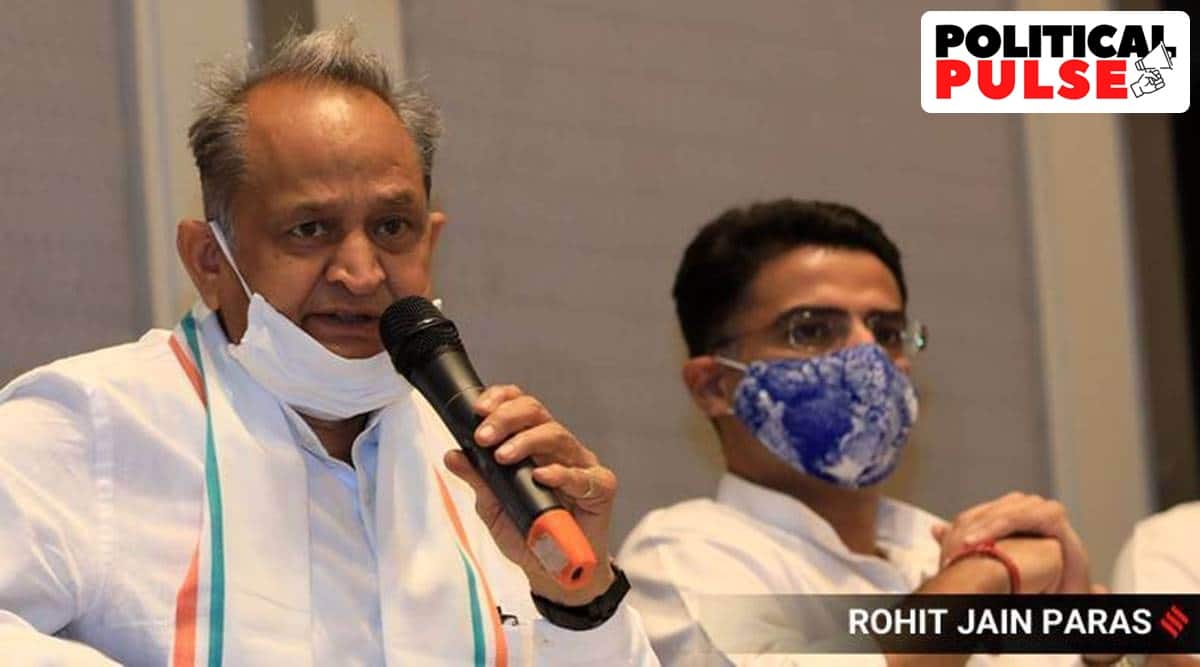 Several party leaders said the developments have cast a shadow on Gehlot’s move to file nominations for the post of Congress president. (File)

Rajasthan Chief Minister Ashok Gehlot’s overnight transformation from a staunch Gandhi family loyalist to a near-rebel who cocked a snook at the leadership has put a cloud on his bid for the Congress presidency.

The open defiance of the MLAs close to Gehlot Sunday has left the leadership fuming, but there was no immediate decision to enforce the planned change of guard in Rajasthan, sources said. The high command, sources said, will plan its next move carefully, factoring in the pushback and the support of the MLAs that the Gehlot camp has.

A day after the powerplay in Jaipur – a large number of MLAs loyal to Gehlot stayed away from a meeting of the Congress Legislature Party, held a parallel meeting and submitted their resignations to the Speaker – the party, in a rare move, made public what transpired between closed doors and called the muscle-flexing by the MLAs as indiscipline.

Several party leaders said the developments have cast a shadow on Gehlot’s move to file nominations for the post of Congress president.

The leadership was so cut-up with Gehlot that Ajay Maken, AICC general secretary in charge of Rajasthan, did not meet the Chief Minister when he reached the hotel in Jaipur where Maken and AICC observer Mallikarjun Kharge were staying.

Kharge, however, met him. Sources said Gehlot told Kharge that the mini-rebellion by the MLAs was not done at his behest and things went out of his hands.

The party’s Central leaders said the MLAs could have attended the meeting, aired their views frankly and left the decision to the Congress president by passing a one-line resolution. They could also have later met the leadership with their demands.

But their decision to stay away from an official meeting called by the party for which the Congress president had sent observers was seen as open defiance.

The Gehlot camp, meanwhile, fielded its leaders including Minister Pratap Singh Khachariyawas to claim that the huddle by the MLAs at Minister Shanti Dhariwal’s residence and the move to submit resignations were not done at the behest of Gehlot.

The Sachin Pilot camp was dejected initially but signals emerging from the high command that the Gandhis are annoyed with Gehlot has enthused them. Sources close to Pilot said he is still very much hopeful of becoming the Chief Minister despite the show of strength by the Gehlot camp.

Pilot is now said to be banking on a decisive intervention by the Gandhis. Senior AICC leaders also maintained that he is still the frontrunner for the post of CM.

Maken and Kharge reached New Delhi and went straight to 10, Janpath where K C Venugopal, AICC general secretary in charge of organisation, also joined them. The three were with Sonia for over an hour. Maken told reporters that Sonia has asked them to submit a written report to her.

Maken said they have told the Congress president that the parallel meeting by the MLAs should be viewed as indiscipline.

In a rare such move, Maken, earlier in the day, made it public that three representatives of the Chief Minister met him and Kharge Sunday and set three conditions for passing the one-line resolution authorising the Congress president to take a decision on Gehlot’s successor.

Also Read |Congress & its missteps: Rajasthan latest in a series of own goals

“I told them that it will be a complete conflict of interest since Gehlot as a CM is moving a resolution and he has openly declared that he will contest the election. And if he becomes the Congress president, the resolution which he is moving now… he is moving the resolution to empower himself after October 19 on who should replace him. I asked them how it is justified. They wanted this to be a part of the resolution and announced. Giving this reason, I said no,” Maken told The Indian Express in an interview.

He said they wanted the observers to meet the MLAs in groups and not one-to-one.

“I said it is not proper as the norm is to meet each and every MLA so that MLAs can freely and frankly give their views. When they come in groups, some people might be under pressure… We want them to say whatever they want to say freely. Kharge is quite a senior person. I am also extremely neutral as far as Rajasthan is concerned. Nobody can say I am Gehlot or Sachi Pilot’s person. So I told them, you just tell your views. We will convey that as it is to the Congress president,” he said.

“Thirdly, they wanted to be part of the resolution or publicly announced that neither Sachin Pilot nor anyone from his group should be the Chief Minister. The CM should be chosen from the 102 MLAs (loyal to Gehlot). I said whatever you are saying we will send it to the Congress president as it is, but we can’t make it part of the resolution. Such a thing has never happened because once you are passing a resolution leaving it to the Congress president… you cannot attach strings to that,” he said.

Also Read |Among Pilot supporters in Tonk, a glimmer of hope: ‘Will he get a chance to lead now?’

He said there is no clarity on how many MLAs have submitted their resignations to Speaker C P Joshi, an act which is seen as nothing but a pressure tactic.

On the MLAs holding a separate meeting, he said, “Prima facie, it is indiscipline. When an official meeting had been convened… to call a parallel meeting unofficially is indiscipline. Let’s see what karyavahi (action) is taken on this.”

The near rebellion by the Gehlot camp comes at a time when the party, reeling from electoral losses and desertions, is looking at ways to revive its fortunes and organisational structure. That the leadership is no longer what it used to be appears to have encouraged the show of defiance.