Freebies or welfare? First test for BJP in Himachal, Gujarat 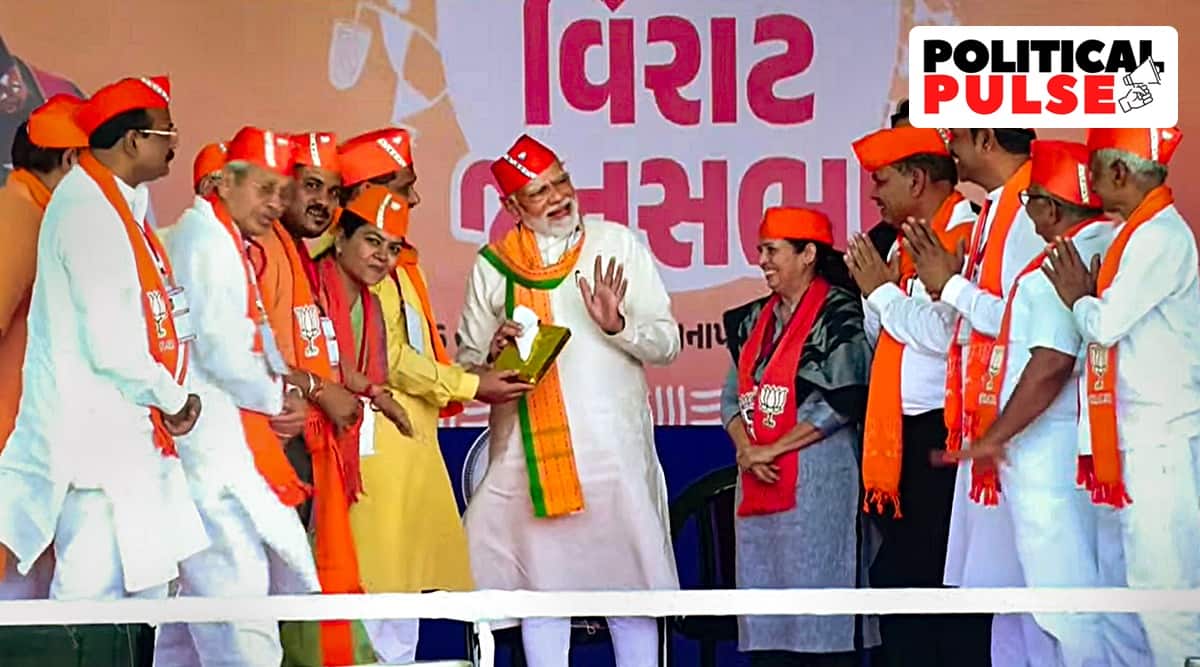 Ahead of the Gujarat poll announcement, the BJP government in the state announced two free LPG cylinders under the PM’s Ujjwala scheme. It is yet to release a manifesto in the state. (PTI)

Having taken a “principled position” against freebies following Prime Minister Narendra Modi’s call against “revdi culture”, the BJP is doing a complicated balancing act in the Gujarat and Himachal Pradesh Assembly elections, in which its rivals have been generous with promises.

In its ‘Sankalp Patra’ for Himachal Pradesh, released last Sunday, the BJP announced that if it returns to power in the state, girl students from classes 6-12 will get cycles while those pursuing higher education will get Scootys. The party also promised free LPG cylinders for women in BPL families, Rs 25,000 for pregnant women, etc.

Ahead of the Gujarat poll announcement, the BJP government in the state announced two free LPG cylinders under the PM’s Ujjwala scheme. It is yet to release a manifesto in the state.

The BJP national leadership, which was in Shimla to launch the party Sankalp Patra, justified the promises, saying these are “not freebies but measures to empower women”. However, in private, they admit “a thin line separates welfare measures and freebies” — an argument that the Opposition has forwarded.

A top BJP leader said, “Freebies are those things you can do away with… (like) waiving loans or electricity bills.” On the contrary, he said, cycles and Scootys will empower girls and women.

BJP national president J P Nadda, who is spearheading the party’s campaign in his home state Himachal Pradesh, said: “There is a distinction between empowerment and allurement. When you empower someone… it’s not allurement. All our commitments are for empowering women, horticulturists, agriculturists.”

Another senior leader said the BJP “views freebies and welfare measures differently”. “Getting electricity to a poor household, where power has not reached in 75 years, is building infrastructure. But waiving their electricity usage charge or giving them free electricity is a freebie.” Similarly, providing the houses and toilets to the poor, or distributing food during the pandemic, cannot be taken as sops, he said.

Advertisement
In Premium |In Gujarat, AAP may be more sound than action, but it has got BJP’s attention

While BJP sources admit this is a “difficult tightrope”, they say the party has few options. “Our rivals, including the Congress and AAP, are making various promises to different sections. The BJP cannot turn its face away,” a party office-bearer said.

A senior BJP leader says that not just in India, “welfare politics has become the norm all over the world”.

“You can differentiate between allurements, the cost of which can create hurdles for economic development, but how will you win against an argument that the government has a duty to provide facilities and materials to the poor? Election time is not the right time to give lectures on principled stance.”

In Himachal Pradesh, where the BJP is battling infighting and anti-incumbency, the Congress, in its manifesto, has promised free electricity up to 300 units monthly to all households and financial assistance of Rs 1,500 a month to women between the ages of 18 and 60.

In Gujarat, where the Congress had put up a fight in the 2017 elections, the party has said it will provide LPG gas cylinders at Rs 500, free electricity up to 300 units, free education for girls from KG to PG, Rs 4 lakh allowance to families who have lost people to Covid-19, waiver of farm loans up to Rs 3 lakh, and free electricity for farmers, if it comes to power in the state.

In the run-up to the Gujarat election, the Arvind Kejriwal-led AAP, which has emerged as the third player in the state politics, promised a monthly allowance of Rs 1,000 to all women above the age of 18 who registered for the same. The AAP also assured free electricity up to 300 units to each family and Rs 3,000 per month to unemployed youths.

Nadda called the promises by the Congress “just allurements”. “It has not kept the promises it made in (Congress-ruled) Chhattisgarh or Rajasthan,” he said.

The chairperson of Congress social media and digital platforms, Supriya Shrinate, accused the BJP of doublespeak. “On the one hand, the BJP and PM Modi cite and attack incentives and help for the common people as revdis. On the other hand, their manifesto is full of dole-outs.”

She said this is reflective of the fact that the BJP is staring at “a complete washout” in Himachal Pradesh. “They have nothing to show for the last five years except corruption and misgovernance. Their 2022 manifesto is a copy-paste job of the 2017 manifesto, where hollow promises remain unfulfilled.”

The issue first surfaced when lawyer Ashwini Kumar Upadhyay filed a petition in the Supreme Court earlier this year, ahead of the UP Assembly elections, against what he called the practice of parties offering freebies. In July, Modi took up the matter, accusing the Opposition of promoting “revdi” culture.

Advertisement
Don't Miss |Packing a punchline: Why Modi’s ‘We Built this Gujarat’ has a familiar ring

The BJP, which is eyeing states like Telangana and Andhra Pradesh, where welfare politics has been central to the agenda of politics, has since taken it forward. It is also the BJP’s principal weapon against AAP, which is seen to have consolidated its base in the Capital on the strength of its free power and free water promises.

Last month, the Election Commission wrote to parties on a proposal that they spell out ways and means of raising additional resources to finance their promises, and the impact it will have on the fiscal sustainability of the state or the Central government.

Amy Schumer reveals her son was hospitalised with RSV; know more about the contagious virus