Firmly in the religion game now, AAP plays the hand of God

One piety project at a time has brought Arvind Kejriwal to currency notes, party believes Muslims won't desert it, know it needs to tackle BJP 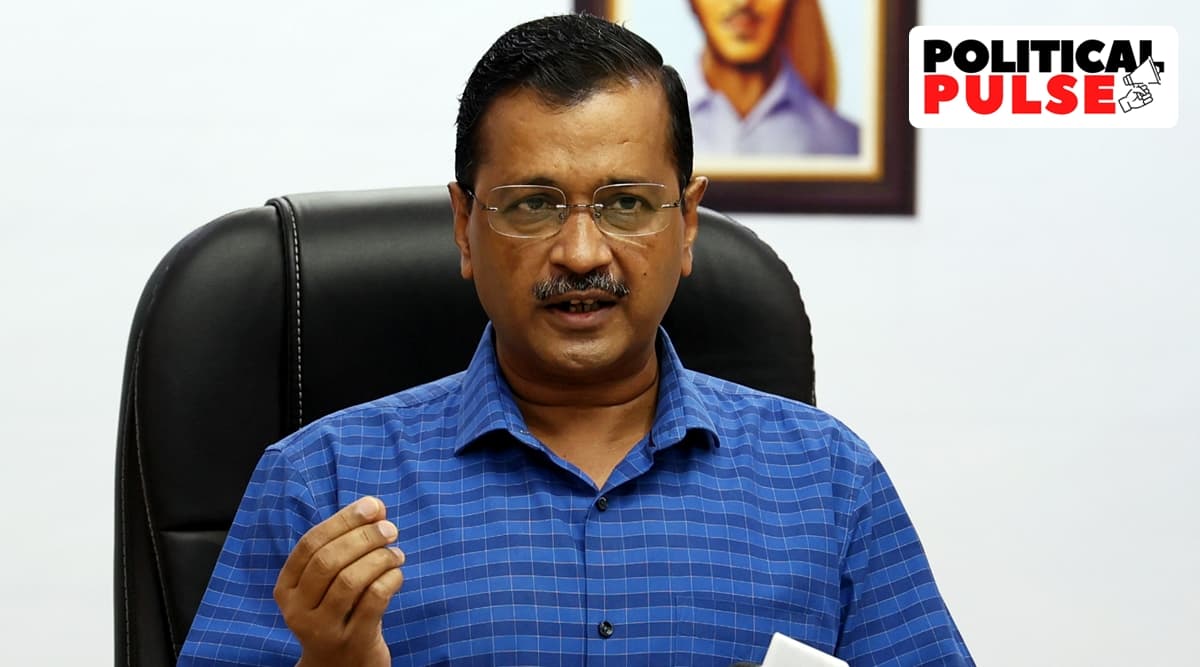 Arvind Kejriwal, while fielding questions after making the appeal for images of Ganesha and Lakshmi on currency notes, answered that Indonesia, a Muslim-majority nation, also has currency notes emblazoned with the picture of Lord Ganesha. (Express Photo by Prem Nath Pandey)

“We believe there are two kinds of people in this world, those who believe in God, and those who don’t…we belong to the former category.”

Drowned out by the political noise generated by Delhi Chief Minister Arvind Kejriwal’s demand for pictures of Hindu deities Lakshmi and Ganesha on currency notes were these remarks by senior AAP leader Atishi on Wednesday.

On Wednesday, perhaps no better statement could capture the AAP’s gradual transition from a party which steadfastly shunned ideological labels in its initial years, adopting an almost apolitical and corporate-like approach, to one that wears religiosity on its sleeves.

The party has long been aware that as it grew, it could no longer take a detached view on issues like caste and religion. And swiftly moving in to fill the vacuum left by a faltering Congress, it has been transforming, one piety project at a time.

Atishi herself dropped her surname Marlena derived from Marx and Lenin in the run up to the 2019 Lok Sabha polls. Her statement Wednesday was a response to the BJP’s criticism that Kejriwal was trying to counter AAP’s “anti-Hindu credentials” by raising the demand regarding the currency notes.

In the short term, AAP hopes that the move will help reverse the potential losses in poll-bound Gujarat in the wake of the conversion row involving Delhi minister Rajendra Pal Gautam. After banners came up across Gujarat showing Kejriwal in a skull cap following the event, Gautam resigned.

“The genius in Kejriwal’s demand is the fact that no party can either endorse or oppose it,” said an AAP functionary. The leaders of the BJP and the Congress acknowledged in private that tackling the demand was tricky.

Explained |AAP wants Lakshmi-Ganesh on currency: who designs rupee notes and how?

“The BJP, instead of diverting from the topic, should simply answer whether it is in favour or against the appeal made by Kejriwal,” AAP Rajya Sabha MP Sanjay Singh said, seeking to corner the BJP by demanding an answer in binaries.

However, Kejriwal’s move, and Atishi’s enunciation of the party’s stand on religion, also mark an escalation in AAP’s efforts to reorient itself in step with the perceived popular sentiments under an ascendent BJP and the RSS.

In recent years, Kejriwal has organised State-funded Lakshmi Puja, announced pilgrimage schemes to religious sites, including Ayodhya, visited and offered worship at the Ram Temple, declared that he was born on “Krishna Janmashtami” and more or less claimed that God had sent him to vanquish evil.

Parallely, AAP has chosen silence on issues related to the rights and issues of minorities, with its leaders admitting this was to guard against antagonising the Hindus. While this has been clear since the 2020 Delhi riots, and the anti-CAA protests which it sought to view from the lens of the setback to the economy, this is even more pronounced as it seeks to emerge as the BJP’s main challenger in Gujarat. AAP has not raised the 2002 Gujarat riots issue and not made any comment on the release of the convicted rapists of Bilkis Bano.

On Wednesday, one of the points raised by AAP MLA Saurabh Bhardwaj was: “Has one Muslim leader opposed Kejriwal’s announcement?” Howsoever the others read this bluster, AAP’s belief is that the Muslims won’t drift away from the party as “the community understands that the party is defeating the BJP at its own game”. Plus, the fact that they have few alternatives.

Kejriwal, while fielding questions after making the appeal for images of Ganesha and Lakshmi on currency notes, answered that Indonesia, a Muslim-majority nation, also has currency notes emblazoned with the picture of Lord Ganesha. “If Indonesia can do this, why not us? No one should have any objection, I feel. This is about prosperity for all and the country’s affluence. Goddess Lakshmi symbolises prosperity and wealth,” the AAP leader justified.

He added that he was not perturbed by statements that AAP was practising Hindutva politics. “Let allegations be levelled. But I have spoken to many people and everyone feels this is a good idea. Entire country will be blessed if the currency notes have the images of Lord Ganesha and Goddess Lakshmi,” said Kejriwal.

If Atishi’s remarks summed up AAP of today, Kejriwal’s comments would have reminded those who have tracked the AAP leader’s journey from an RTI activist to anti-corruption crusader to true blue politician, of another statement of his. Describing himself after winning the Ramon Magsaysay Award in 2006, Kejriwal had said, he was “neither a believer nor an atheist”.

Miya Museum: 3 linked to it held, charged under UAPA in Assam