While Bharti asked a reporter how much money she got from Modi, Kejriwal claimed media was doing anti-AAP stories for money. 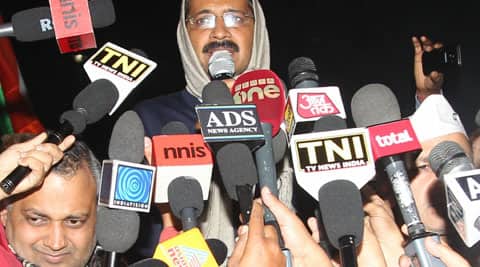 While Bharti asked a reporter how much money she got from Modi, Kejriwal claimed media was doing anti-AAP stories for money.

Aam Aadmi Party (AAP) ministers seem to have found a new enemy in media. Two of AAP ministers – Chief Minister Arvind Kejriwal and Law Minister Somnath Bharti – accused the media of taking money from their political rivals to give them a bad press.

While Somnath Bharti, who has been in controversies since taking oath as the Law Minister, asked a reporter how much money she got from Bharatiya Janata Party (BJP) Prime Ministerial candidate Narendra Modi, the Chief Minister himself claimed that media was being paid to do negative stories about his party.

Kejriwal made this weird claim even as he said that Bharti’s statement to the reporter concerned was inappropriate. However, he himself made the remark about media being paid during his speech as the Chief Minister of Delhi at a celebration on the eve of Republic Day.

Earlier on Saturday, terming all the reports against him as false, Bharti had threatened, “They are trying to defame me, I am going to take them to the court.” However, it was not clear who he was referring to. But as reporters continued to question him over the controversy surrounding him, he accused them of taking money from the Gujarat Chief Minister. “How much money have you received from Modi?” he shot back.

Meanwhile, referring to his protest in the heart of the capital being termed as unconstitutional in a section of media and critics, Kejriwal said he had read the Constitution and was sure that it does not prevent a Chief Minister from holding a dharna.

“I read the Constitution, couldn’t find anywhere that a Chief Minister cannot hold ‘dharna’,” he said on criticism to his two-day dharna outside Rail Bhavan.

And during the course of his speech, he went on to charge that “the media is getting paid to do negative stories on AAP.”

Audit all power companies or I will immolate myself: Sanjay Nirupam