Criminal Procedure(Identification) Bill, 2022: The dreaded thanedar vs empowerment of police

Moving the Bill, Shah said it was being brought as the Identification of Prisoners Act, 1920, “has become kalbahya (obsolete) from the point of view of time and science”. 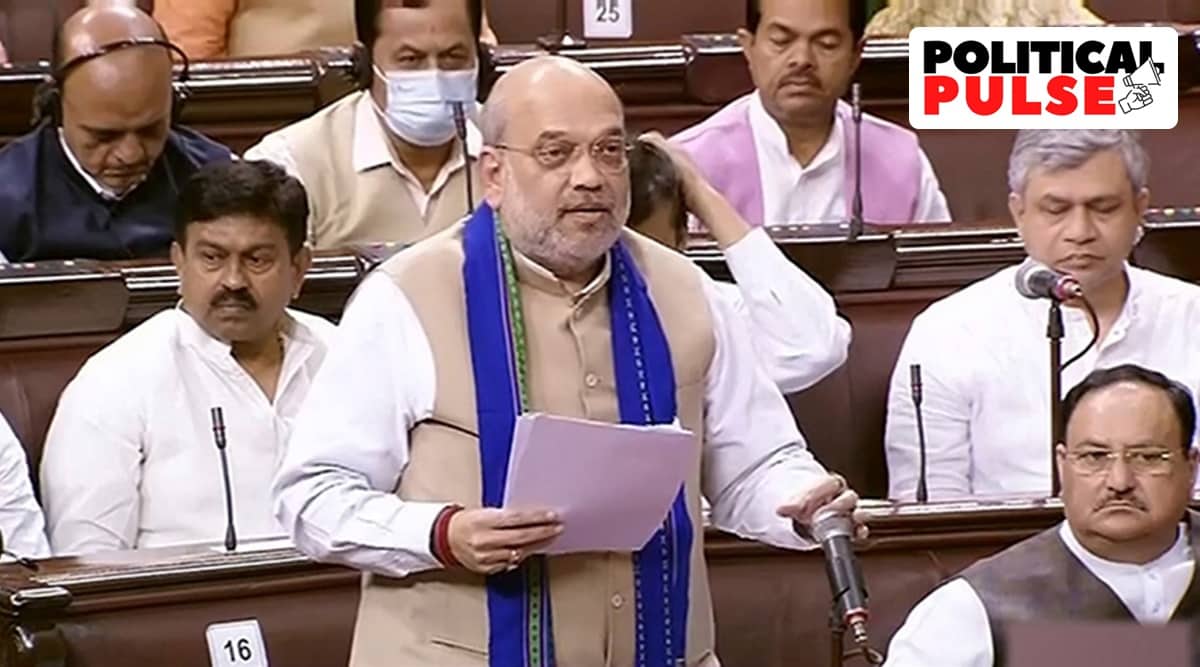 Shah also said the government would soon come out with a model prison manual to address the concerns expressed by the House.

The Criminal Procedure (Identification) Bill, 2022, was passed by both Houses of Parliament this week, amid heated protests by the Opposition. Introduced by the government on March 28, it cleared the Lok Sabha on April 4 and the Rajya Sabha on April 6. The government turned down demands that the Bill be referred to a Standing Committee for consideration.

A look at the debate in the Lok Sabha:

Moving the Bill, Shah said it was being brought as the Identification of Prisoners Act, 1920, “has become kalbahya (obsolete) from the point of view of time and science”. “The Criminal Procedure (Identification) Bill, 2022, will not only fill those obsolete gaps… but it will also widen the scope of evidence for conviction.”

Shah also noted that it was in 1980 that the Law Commission had recommended reconsideration of the Identification of Prisoners Act, 1920, and said they had held several discussions and communications with states. “After incorporating their suggestions and studying various provisions being used in criminal laws for proving guilt across the globe, I have brought this Bill.”

He also said the government would soon come out with a model prison manual to address the concerns expressed by the House.

Tewari, the Anandpur Sahib, Punjab, MP said the Identification of Prisoners Act introduced by the British had a history and perspective, and that needed to be presented before the House. “Uski mansha thi ki logon mein ek dar paida kiya ki agar aapke figureprints le liye jayenge, aapki tasvir kheench li jayegi, vah tasvir thanon me lagai jajegi, aapke figureprints circulate kiye jayenge, to aapko na koi naukari mil payegi aur na aap koi vyavsay kar payenge (The intention was to intimidate people, that your figureprints will be taken, your photo will be taken, that photo will be put up at police stations, and if your fingerprints are circulated, then you will not be able to find a job nor do any business),” he said, adding that if any law is brought in to replace it, “it is expected that the law would be liberal”.

However, Tewari said, the Bill brought by the government violates the three Articles of the Constitution — 14,19 & 21 — which enshrine basic rights. This, he said, went against the Supreme Court’s landmark judgement in the Kesavananda Bharati vs Union of India outlining that no government could change “basic structure” of the Constitution.

The Congress MP expressed concerns over several provisions of the Bill, starting with the definition of “measurements”, which he said was very “ambiguous and nebulous”. He specifically asked whether brain mapping and narco analysis will be used as part of “biological samples and their analysis”, and about the intention behind collecting details on “behavioural attributes”.

The leader of the Congress in the Lok Sabha, and the MP from Baharampore, West Bengal, Chowdhury said the Bill “offers a carte blanche to police officials to collect samples according to their whims and fancies”. There was “a danger of serious infringement upon the territory of freedom, individual rights, and civil liberties”, he said.

Political Pulse |From MVA fulcrum to counselling Uddhav to meeting Modi, Pawar plays in all seasons

The Chennai Central MP called the Bill “anti-people and anti-federal”, and sait it had been brought to “terrorise the country”. “I would have appreciated if the Home Minister had brought the law en masse to ensure that all the antique laws which were brought by the Britishers are given a new effect, but they seem to be cherry-picking, cherry-picking whichever laws they want to change and, that too, if they feel that they can terrorise the country.” Maran said he was saying so as the Bill was “against the Fundamental Right to Privacy of a citizen”.

Addressing the government, he said: “As a common man, I am concerned. Do you not feel that this will be misused, targeted against individuals? Your government is known to target the minorities. Any law you bring, the first abuse is done to the minorities… Any ordinary citizen who is accused or a person suspected of anything can be profiled to this extent.”

Expressing concern over “sweeping powers” to the government, and accusing the government of misusing Central agencies, Maran said: “Already we feel that the Union government is spying on Indians with the Pegasus software, which you failed to address.”

Moitra, the Krishnanagar, Bengal, MP, also referred to the British origins of the 1920 Act “to control nationalist forces and increase surveillance”. “Now, how tragic or ironic it is that a century later, we have an elected Indian government… which claims to be more nationalistic than any of its predecessors… and today you are bringing in a law that is more intrusive, that collects more data than the original law, and has fewer checks and balances and fewer safeguards than even the British era law had.”

Moitra noted that the Bill redefines the term “measurement” to allow police to take retina scans, iris scans, fingerprints, palm prints, footprints, physical and biological samples and behavioural attributes, including signatures and handwriting, and said the law would be introduced without a data protection law, “which India so desperately needs”.

“The mala fides of this Bill are apparent, not only the unconstitutional provisions it seeks to enforce. It also seeks to blur out any and old distinction between an undertrial, a detainee or suspect and a convict. It is using the words ‘a person involved in any crime’. It is a very broad sweep. The expansion of this ambit… allows arrest of persons for any offence, which include people under preventive detention laws.”

Moitra added: “This Bill will make the thanedar — the dreaded thanadar — even more dangerous.”

Roy, the MP from Dum Dum, Kolkata, also talked about the undue powers to police officials, saying: “I think this Bill was drafted in a hurry. Without any provocation, there is no reason why Shri Amit Shah suddenly came up with this Bill.”

Noting that the debate was whether the Bill was too “intrusive”, Cuttack MP Mehtab said the legislation contains “muddled language”. “We want to control them but, at the same time, are we doing something which will protect innocent citizens? There, actually the crux of the issue lies. We have to bring a balance and here, in this Bill, that balance is lacking,” he said.

Sule, the NCP MP from Baramati, Maharashtra, also sought balance. “I am sure the intention of the government is very good. Even from the state where I come from, we are completely open to doing these identification tests… But how far we want to go is the question that we need to ask ourselves.”

The MP from Amroha, Uttar Pradesh, Ali said his party was not opposed to police reforms or modernisation of police forces but to certain provisions of the Bill. Observing that a head constable can prepare one’s complete identification profile under the new law, Ali said, “ Do you want to make India a police state?”

Basheer, the MP from Ponnani, Kerala, said the new law “will be an addition in the list of black laws”. “This will give extra-constitutional power to the police officers from SHO level to Presiding Officers and Magistrates.”

Premachandran, the MP from Kollam, Kerala, also called the proposed law “draconian”, and said it “takes away the democratic and fundamental rights of citizens”.

The Aurangabad, Maharashtra, MP said: “My objection is not that we cannot collect this data, that we should not use technology to prevent crime. My objection is that the government is bringing in this law without respecting the constitutional Right to Privacy or the right against self-incrimination.”

The Palamu, Jharkhand, MP, said the Bill would help improve conviction rates as well as “curb crime and criminals”. Ram argued that criminals keep changing their modus operandi, and that investigative agencies need to be “empowered” to check crime.

Disputing the Opposition’s charge that the Bill violates constitutional provisions, he said: “In Ritesh Sinha vs State of Uttar Pradesh, Honorable Supreme Court had said that compelling someone to give sample does not violate Article 20(3).” (The Article guards an accused against any act that can be self-incriminating.)

The Hisar, Haryana, MP argued that the Bill filled crucial gaps. “No society is perfect, nor is ours. There are deeply held biases and prejudices embedded in our social consciousness. Our police is a product of its social milieu, and as such is far from being perfect. However, that does not mean we do not empower it with requisite powers and instruments. There is an undeniable need to strike a balance between protecting an individual’s privacy and giving police the tools they need to keep us safe.”

The MP from Baghpat, Uttar Pradesh, and a former police officer, Singh said that “if we want to build the best country, we have to enact good laws”. On the Opposition’s charge that the law will be misused, Singh said: “Let me know which law is not misused. We have so much political willpower that we will not allow it to be misused.”

Sarangi, the MP from Bhubaneswar, said the Bill reinforced that the Modi government “keeps pace with changing times”.

The MP from Rajampet, Andhra Pradesh, backed the Bill as being “in line with global standards and for our investigation agencies to be on a par with other advanced countries”. Reddy added: “… it can also protect innocent people. It can save government money… government resources. It will also save time spent on investigations”.

However, the YSR Congress Party MP cautioned that the Bill should not become a tool for political “witch-hunt”. “DNA profiling also… should be used purely for serious crimes and for counter-terrorism purposes only.”

The Theni, Tamil Nadu, MP said: “For a civilised and advanced society to be developed and maintained, a civilised and sophisticated police force is quite essential… Therefore, emphasis should be made in this Bill on capacity building, including experts in forensics at the police station level itself.”

The MP from Amravati, Maharashtra, said: “The Bill is being opposed on the count that it is unconstitutional as it affects the Right to Privacy, but the Right to Privacy is altogether a different thing than the intent of the government. There is no reason to create a hungama on this.”

Replying to the debate, Shah said no possibility of data misuse has been left in the Bill. “In the rules, the method of its functioning would be chalked out in such a way to ensure it and the services of best knowledgeable persons of technology in the country would be availed for this purpose,” he said.

Shah also argued that the Bill is for “protecting the human rights of crores of law-obedient citizens of the country”.

Alcaraz, youngest in top 10 since Nadal in 2005, a right-handed Rafa or the next Novak