PM’s remark was an effort to undermine regional parties in the country, says JD(S) leader 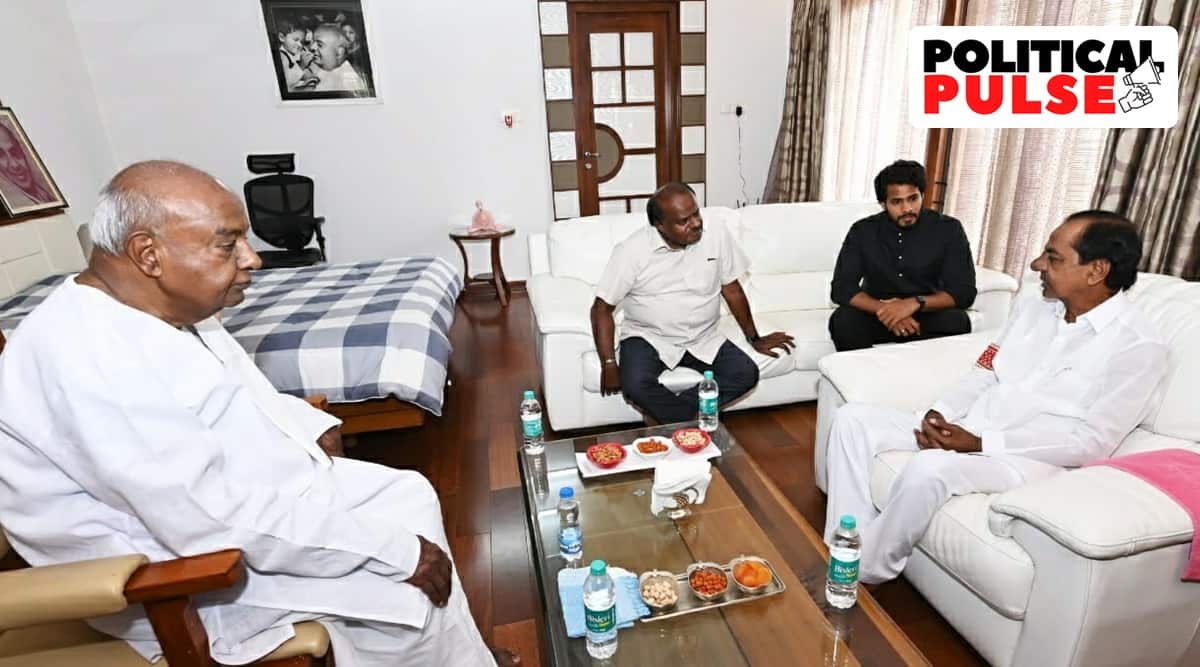 While PM Modi was in Hyderabad on Thursday, Telangana CM KCR was in Bengaluru to meet JDS leaders H D Deve Gowda and H D Kumaraswamy to discuss a national alliance against the BJP. (Photo: Twitter/@TelanganaCMO)

Communal politics is a bigger threat to the future of India than dynastic politics, former Karnataka chief minister and leader of the regional Janata Dal (Secular) party H D Kumaraswamy said on Friday, in response to Prime Minister Narendra Modi’s warning in Hyderabad that dynastic parties function against the interest of the nation.

In a series of social media messages on Friday, Kumaraswamy called the attack on dynastic politics an indirect effort to undermine regional parties in the country that have emerged as the main source of political resistance to BJP’s communal politics since the downslide of the Congress.

“The danger to the nation is not from dynastic political parties, it is posed by communal parties like the BJP. Parties raising emotive issues to grab political ground are the real threat to democracy and pose a threat to constitutional values. I do not think that the honourable Modi is not aware of this,” Kumaraswamy said on Twitter.

Earlier, on Thursday, during a visit to Telangana, Prime Minister Modi had targeted the Telangana Rashtra Samiti party which is in power in Telangana under Chief Minister K Chandrashekhar Rao. “Wherever dynasty politics has been wiped out, there has been development and growth. Family politics is a threat to democracy, and as soon as a ‘parivari party’ comes to power, they become corrupt. The family tries to hold on to power for as long as possible,” Modi said.

PM Modi was in Hyderabad on Thursday even as the Telangana CM KCR was in Bengaluru to meet former PM and JDS leader H D Deve Gowda to discuss a national alliance against the BJP – especially in the context of the election of a new President that is scheduled for July.

Prime Minister Modi’s comments against dynastic parties were seen as targeting southern political parties like TRS in Telangana, the DMK in Tamil Nadu, and the JDS in Karnataka where individual families hold sway over the party – KCR in TRS, the Karunanidhi family in DMK and the Gowda family in the JDS.

“The intent of the Prime Minister is to target regional parties under the guise of targeting dynastic politics. Since the fall of the Congress party, regional parties emerged as the main political rivals to the BJP. The BJP may go to any extent to finish off such regional parties,” Kumaraswamy said on social media on Friday.

Kumaraswamy also stated that the BJP should understand that it was also a branch (as the Jan Sangh) of a political family that came together under Jayaprakash Narayan to fight the Emergency. He said the NDA comprised many regional parties when it came to power. “There are many instances of dynastic politics in the BJP itself,” Kumaraswamy stated.

“Who has disrupted the unity in diversity achieved in the country despite the presence of multiple castes, religions, languages, food, and commercial practices? Who started the unconstitutional practice of poaching legislators from other parties under Operation Lotus?” the former Karnataka CM said in an indirect reference to the BJP.

“The strategy of targeting dynastic politics to attack regional parties will not bear fruit. India is not about the BJP alone. Only when 140 crore people in India come together can there be India. I hope the PM will understand this,” Kumaraswamy said.

How Aryan Khan’s case cruised and docked: Timeline of events