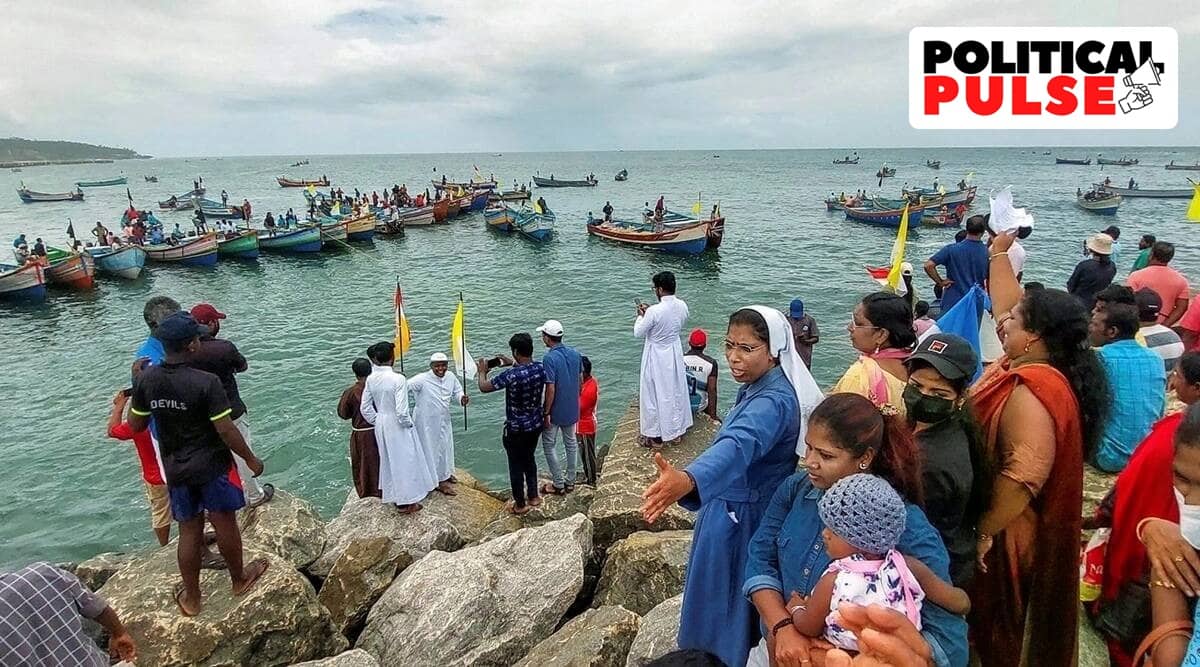 Fishermen and citizens use their boats to lay siege at the Adani port during their protest against Adani Group's port development project at Vizhinjam. (PTI File Photo)

The Catholic Church’s close involvement with the four-month-long protest against the Vizhinjam seaport being developed by the Adani Group is in line with the huge role it plays in the lives of fishermen in the area.

Last Saturday, the protest spiralled into a violent agitation at the police station, with officials held hostage and the premises and vehicles vandalised, and resulted in police booking Thiruvananthapuram Latin Catholic Archdiocese Archbishop Thomas J Netto, his auxiliary R Christudas, agitation committee general convener Fr Eugene Pereira and several others priests, on charges of criminal conspiracy and rioting, among others.

The fishermen community, which falls in the OBC category in the state, and mainly dwells along the coast of the Thiruvananthapuram district, both north and south of the project, is almost 90% Christian. Their protest is linked to fears that the development of the port will lead to loss of livelihoods and dwellings.

The Archdiocese here has a separate unit called the ‘fisheries ministry’ that specifically looks at the socio-economic concerns of the fishermen community. Even the government uses the public address system of churches along the coast to convey warnings regarding weather to fishermen. A large number of priests of the Thiruvananthapuram Archdiocese, established in 1937 by Belgium missionaries, themselves hail from fishermen families.

The Church’s oversized role is helped by the fact that Kerala’s otherwise vibrant political parties enjoy limited clout among the fishermen community. Says A J Vijayan, who runs the NGO Coastal Watch, “Political parties have failed to study fishermen issues and develop a direct rapport with them. Instead, their stand on development and projects has alienated them from the community.”

Vijayan adds that parties perhaps feel little need to cater to the community, as most fishermen in the region operate traditional, small mechanised vessels, with three to five person workers, and hence are self-employed. This means they ask little of the government. “On the other hand, the Catholic Church has a well-oiled machinery to address their issues and keep them in its fold,’’ he says.

A member of the community who identifies as pro-Left admits that despite having three branches in the Vizhinjam region, with scores of Catholics as party members, the ruling CPI(M) “does not have the courage to speak against the Church”. On the contrary, he says: “Many of them are part of the agitation against the seaport under the leadership of the Archdiocese. Winning votes here during elections, by and large, is dependent upon the stand of the Church. This has forced local politicians to silently rally behind the Church-led agitation,’’ says the local politician, who does not want to be identified.

CPI(M) Thiruvananthapuram district secretary Anavoor Nagappan says this support is only because “people are afraid of the Church”. “They have independent political views, but they surrender before the threat of the Church. Those who do not turn up for the agitation (against the port) face threats and ostracism. Fishermen speaking against the Church also face denial of services in church institutions,’’ says Nagappan.

The Archdiocese’s involvement in the protest extends to bringing people from all parishes daily, with a schedule planned for who is expected to send the men and women and when to the site. Local churches also mobilise money for travel to the protest site.

MNREGS worker Amala Mariyadasan, of St Jacob’s Church at Pulluvila in Karakulam panchayat, says she has joined the protest several times. “Whenever there is no work under the MNREGS, I join the protest,” she says.

Priest Father J Jose, who has organised around 300 people from Pulluvila for the protest, says their parish has fishermen running around 250 mechanized small vessels. Claiming widespread support for the protest, he says: “They are ready to donate money for the agitation. All our people are ready to participate in it. Those not in the fishing sector, are ready to join at night.”