‘Chunavi Hindu’ says BJP, but Rahul Gandhi is climbing steps one temple at a time in his Yatra

Congress leaders has made shrine visits in every leg of the Yatra, accuses BJP of neglecting real “tapasvis” like farmers, workers for “people who pray to Modi” 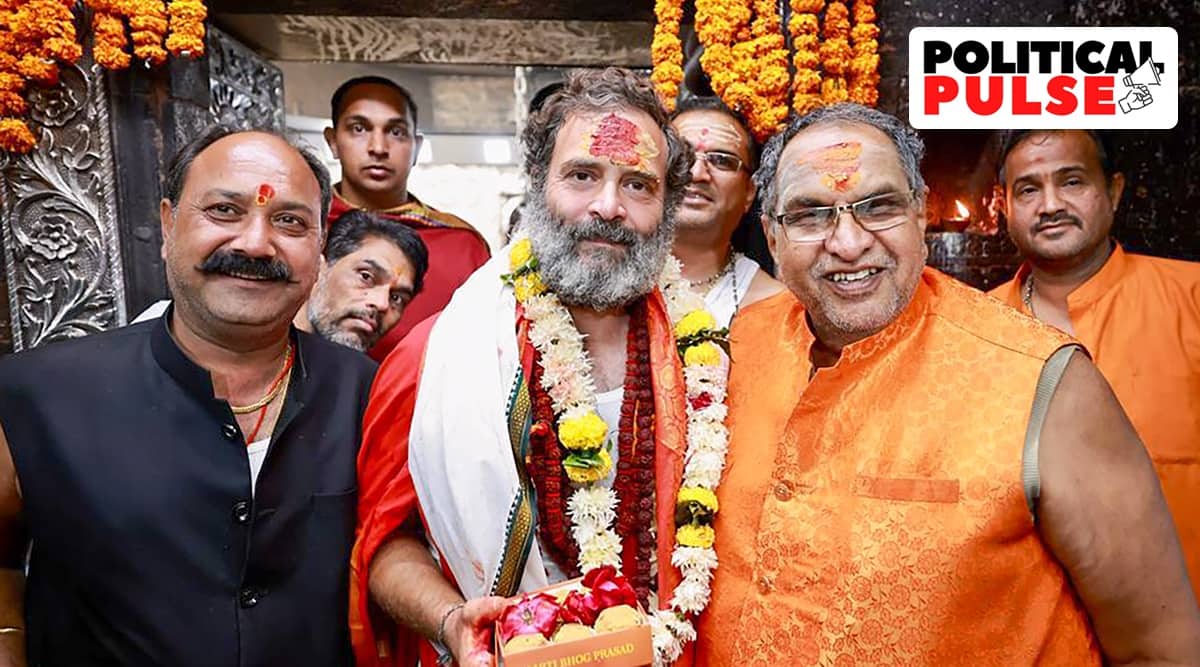 Congress leader Rahul Gandhi during his visit to the Mahakaleshwar temple in Ujjain on Tuesday. (Photo: PTI)

Visit one temple and they may question your religious credentials, visit several, and it might cease being an issue. As part of the Bharat Jodo Yatra, Congress leader Rahul Gandhi has been making high-visibility halts at shrines, particularly temples, appearing with vermillion on his forehead often, putting out pictures bowing to deities, posting videos of interactions with priests and, in an icing on the cake, sharing a photo that shows him prone in sashtang pranam at the Mahakaleshwar Temple in Ujjain.

The Ujjain temple incidentally is one of the prominent shrines developed, and celebrated, under the BJP rule in the state and Centre. Just over a month ago, a Mahakal Temple Corridor was unveiled with much fanfare in a ceremony attended by Prime Minister Narendra Modi.

The BJP has kept up its attacks on Rahul for the temple run. On Thursday, Madhya Pradesh Culture Minister Usha Thakur said: “My humble prayer is that no spiritual activity should be made a medium for political gains. These activities are an integral part of our life. You go to temples, it is welcome, but you should also understand the importance of offering prayers and darshan of the deity.”

Campaigning in Ahmedabad’s Vasna for the Gujarat polls, Union Minister Smriti Irani said: “They (the Congress) are now reminded of the Hindu dharma because they are losing elections and understand that if they humiliate dharma and Hindus, they will not get a single vote from (people of) this religion.”

Unlike this election, when Rahul has made just one visit so far to campaign for the Gujarat elections – in a break from his Bharat Jodo Yatra – the Congress leader had canvassed extensively in the 2017 polls, including making a series of temple visits in the state. The BJP had mocked Rahul then too, though that election saw the Congress give the ruling party a scare.

Accusing Rahul of “putting up a pretence to prove his Hindu lineage”, BJP IT cell head Amit Malviya tweeted: “Rahul Gandhi is as much a Hindu as Arvind Kejriwal is honest… Make no mistake, this is just a tactical retreat, with electoral compulsions in mind, nothing else.”

Sharing a video of Rahul performing aarti at Omkareshwar temple in MP, Malviya said: “If only ‘chunavi Hindu’ Rahul Gandhi knew that aarti is done clockwise and there is a scientific reason for it (earth moves in a clockwise direction and hence environmental frequencies are in sync with movement), he would not be making a spectacle of himself in public like this.”

(Viewed from the North Pole, the Earth actually moves in a counterclockwise direction; from the South Pole, it appears to rotate clockwise.)

Rahul Gandhi, son of a Catholic mother and a Parsi father, should stop this fancy dress drama in Hindi heartland.

When in Kerala or TN, he never bothered to visit a single Hindu temple. Visited minority religious places though.

His beliefs change depending on electoral maths… pic.twitter.com/zj0Gh2PZkW

After his visit to the Mahakaleshwar Temple in Ujjain Tuesday, Rahul accused the BJP government of disrespecting “workers, farmers and small businessmen — the real ‘tapasvis’ akin to Hindu gods Shiva, Rama and Krishna”.

Vermillion on his forehead, Rahul peppered his speech with references about Hindu gods and the Bhagawad Gita. “The Hindu religion teaches us to worship ‘tapasvis’… so why are they not worshipped?… The government does not give them anything, it gives everything to those who do puja of Narendra Modi,” he said. “Those who worship Modi, they get everything they want, railways, ports, airports, roads, power, water… everything.”

The Omkareshwar and Mahakaleshwar temples are among the 12 Jyotirlinga sites in India, associated with Lord Shiva.

In October, during the Bharat Jodo Yatra’s Karnataka leg, Rahul reached out to members of all three main faiths — Hindu, Muslim and Christian — in Mysuru by visiting the Chamundeshwari Temple atop the Chamundi Hills, the Masjid-e-Azam and the St Philomena’s Cathedral on the same day.

Sharing pictures of the temple on Twitter, Rahul said: “Religious harmony is the foundation of India’s peaceful and progressive future.” The Bharat Jodo Yatra’s stated aim is to unite the country against “hate” and “discord”.

A day later, he visited a prominent mutt of the Lingayat community, the most powerful voting group in Karnataka.

Entering Maharashtra on November 9 from Telangana, Rahul paid a visit to the Nanded Sahib gurdwara, one of Sikhism’s holiest shrines, on the occasion of Guru Nanak Jayanti. On its official Twitter page, the Congress shared a video of Rahul praying wearing a headscarf with the Khanda symbol and someone wrapping a Dastar around his head. He prayed for harmony and equality, the party said.

In September, soon after he had taken off from Tamil Nadu, Rahul met controversial Tamil pastor George Ponnaiah. After videos of their meeting emerged, the BJP attacked Rahul.

Drone with 5kg heroin recovered from Punjab village along border