With three CAG reports giving fresh ammuntion to the opposition to target the government,the Congress today accused the auditor of sensationalising its reports and crossing the line.

The party spoke of “long-term implications” if any Constitutional institution does not maintain the “fine balance and decides to transgress”.

Seeking to trash the CAG report on coal blocs allocation,which has led to BJP demand for the resignation of Prime Minister Manmohan Singh,party spokesman Manish Tewari said the Supreme Court had “not endorsed” the presumptive loss of Rs 1.76 lakh crore pointed out by CAG in 2G spectrum allocation issue.

“CAG will be well served by keeping this precedent in mind and not keep adding zeros,which unnecessarily sensationalises and vitiates the environment”, he said.

Tewari’s remarks came in response to a host of questions,including whether CAG was crossing the ‘Lakshman Rekha’ and on BJP demand for the resignation of the Prime Minister in the wake of CAG report on the coal blocs allocation. 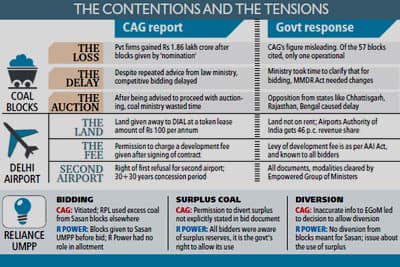 The government has already rubbished CAG’s findings that private firms had got “undue benefits” to the tune of Rs 3.06 lakh crore in coal,aviation and power sectors,claiming the calculations were “misleading” and “faulty” and accused the auditor of not following its mandate.

“The CAG has the habit of adding zeros and he should desist from it,” Tewari said adding the auditor should draw appropriate lessons from the Supreme Court “failing” to endorse the presumptive loss on the 2G allocation.

Seeking to take the wind out of the CAG charge,Tewari said that of the 57 coal blocks allocated,mining has not yet started in 56 of them.

If this is the situation,then who has got the benefit and who has suffered loss,he said.

Besides,he said even if it is assumed that there has been a benefit of Rs 1.86 lakh crore,it is spread over a period of 30 years and “cannot be considered as the net present value”.

Asked whether opposition parties were exploiting the situation caused by CAG reports and has landed the government in a problematic situation,Tewari said only PAC can evaluate the findings of the audit body.

Alleging the BJP was having double standards on the issue,he said when CAG reports come in BJP-ruled Gujarat,Chhattishgarh and Madhya Pradesh,the Chief Ministers there do not even place them on the table of the assembly.

Australia ‘preparing’ for Assange extradition to US