Bhim Army chief: ‘Had UP exam been a religious event, flowers would have been showered… You were not elected to do religious rituals, but to meet aspirations… Or, resign’

Chandrashekhar Azad interview: “If I don’t consider a deity my God, it is not disrespect. It would be if I said something against a deity... Who complained against Delhi minister Gautam? BJP. Who forced him to resign? AAP. Both are using Ambedkar’s name just for votes” 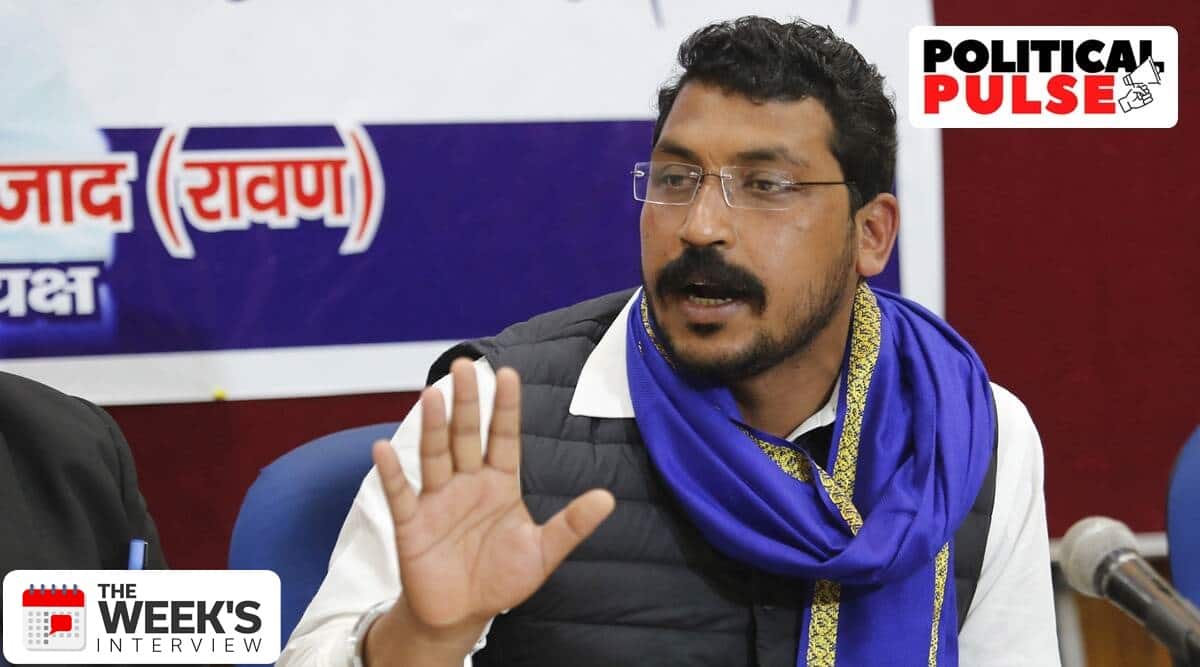 Bhim Army and Azad Samaj Party president Chandrashekhar Azad has emerged as a youth leader, especially for the Dalits, by claiming to represent their aspirations, unaddressed by other parties. In the wake of the scenes of lakhs of aspirants for the Uttar Pradesh Preliminary Entrance Test trying to make it to exam centres packed into trains and buses, he speaks about the unemployment issue, the plans of his party that are yet to take off, and Dalit representation that is back in the news following the conversion row that led to Delhi minister Rajendra Pal Gautam’s resignation. Excerpts:

The crowds that turned up for the UPPET exam last week were seen as equally a sign of the state government’s mismanagement as of the scale of the scarcity of jobs. How do you see it?

AZAD: India doesn’t have democracy anymore, because democracy is the rule of people. Now, there is a monarchy, which looks like democracy. During elections, we see political parties make big promises for jobs. Some say they will give 2 crore jobs. You must have seen that before elections in UP earlier this year, the government started giving rations to people… This is a bribe for votes. Political parties lie before elections. The youth are also struggling because of this. They study and hope for a government job… The condition of unemployment is so bad that for 10 vacancies of even a Class IV job, five lakh people apply. Out of the five lakh, two lakh people are well-qualified. We are not even using the capabilities of the country well.

We saw the kind of mismanagement that happened during the UPPET examination. I don’t believe in criticism but everyone was saying that had the examination been a religious event, flower petals would have been showered on the aspirants. I believe the Chief Minister of the state should have been aware of the challenges. In religious events, new trains are run, and in election rallies too. You are the guardian of the state as the CM, and you should have ensured that the students get to travel in safe conditions…

He (Yogi Adityanath) keeps talking of the safety of sisters and daughters. They had to suffer so much… Who will take responsibility for this? The CM should remember that people have not voted for you so that you can sit in your residence to perform religious rituals. You have been voted to power to fulfill the aspirations of the youth. If you can’t, then please resign.

Protests are ongoing at Allahabad University and Banaras Hindu University by student groups against the hike in fees.

AZAD: The Bhim Army student wing is part of the protests… These universities have students from Scheduled Castes, Scheduled Tribes and minority groups — those who are financially weak. This hike will make education inaccessible for these groups. The RSS and BJP have never understood the value of education. Their politics is around religion and division and they want to end these educational institutes. Dr Ambedkar used to say that those who get education will raise their voice, and this is what the BJP doesn’t want.

Elections in Gujarat and Himachal Pradesh are approaching. Does the Azad Samaj Party have a plan for these elections?

AZAD: In both the states, we have a strong organisation. We have raised issues of the people and have led their struggles. We believe in raising our voice on basic issues… I will be going to Himachal Pradesh. We will contest the elections there with full strength. If there is a possibility of an alliance there, we will discuss it.

In UP, the BSP only managed to win one seat out of 403. What do you think about the party’s future in the state?

AZAD: So far, the people from downtrodden communities had no choice. They had to vote for the BSP even if it didn’t work for them. But now, the scenario is different. The Azad Samaj Party is working on the ground and raising issues of the people. In this year’s election, people told me they were voting for them (the BSP) for the last time, and that in future, they would vote for the Azad Samaj Party.

You recently met OBC leader from Madhya Pradesh’s Chambal region Pritam Singh Lodhi, who has been expelled from the BJP. Is there something on the cards for MP, where elections are scheduled late in 2023?

AZAD: More than the Legislative Assembly elections, I feel what is important is the issue of reservation in panchayat elections in MP, where the quota for OBC communities should be 27%. We are uniting the OBCs, Dalits and minorities there and working with them. We are working with the OBC and tribal outfits. We want to do what has never happened in the state, which is to make an Adivasi the CM of MP. We are working on the ground to make the Adivasis understand the value of their vote. We are trying to form a coalition of leadership from these groups and we will contest elections under the coalition. We are making similar efforts in Rajasthan and Chhattisgarh.

In Delhi, we saw the resignation of Minister Rajendra Pal Gautam over participation in a conversion event, after he was attacked by BJP leaders. The BJP has alleged that ‘anti-Hindu’ statements were made at the event. AAP didn’t come out in support of Gautam. How do you see AAP’s role on the issue?

AZAD: He was forced to resign by AAP… Bhim Army members had reached the police station where Gautam was taken (for questioning). People from his party didn’t come, but we supported him. The police had to let him go. A couple of things are clear after this. The BJP talks of Dr Ambedkar and says it wants to fulfill his dreams, and so does AAP. And yet the 22 resolutions at the Delhi event (which the BJP took exception to) were framed by Dr Ambedkar when he accepted Buddhism… He had said that while it was beyond his control that he was born in the Hindu religion, it was in his control to not die a Hindu. The resolutions he took when he accepted Buddhism included that he no longer considered Hindu deities his God. And this is not disrespect. If I don’t consider a deity my God, then it is not disrespect. It would be disrespect if I say something against a deity.

Now, let’s get back to Gautam and his resignation. Who complained against him? The BJP state president of Delhi. Who forced him to resign? AAP and Arvind Kejriwal. That means both are using Ambedkar’s name and just want the votes of people who believe in Ambedkar. They are exposed now. People from Dalit, backward and minority communities who believe in Ambedkar should not fall into the trap of AAP.

Veteran Congress leader, and a Dalit, Mallikarjun Kharge has been elected as its president. How do you see this in context of the Dalit politics in the country?

AZAD: I don’t know if he has been made the president because of being a Dalit. He may have been made the president because he is a loyal leader of the party. I won’t comment on it, and would like to congratulate him for being elected. We will see how he will work. (But) We have been seeing the Congress for a long time. In Rajasthan, the Congress is in power and, despite that, several people from the Meghwal community have been killed for keeping a moustache. Whenever I go to meet the families of victims, I am treated the same way there as the BJP treats me in other places… When in power, the Congress behaves the same way as the BJP does.