As Belagavi simmers, a familiar name is raising the heat: Karnataka Rakshana Vedike

The Vedike calls its motto “Kannada is caste, Kannada is religion and Kannada is God”, has more than 62 lakh members, and doesn't hesitate to take law into its own hands. 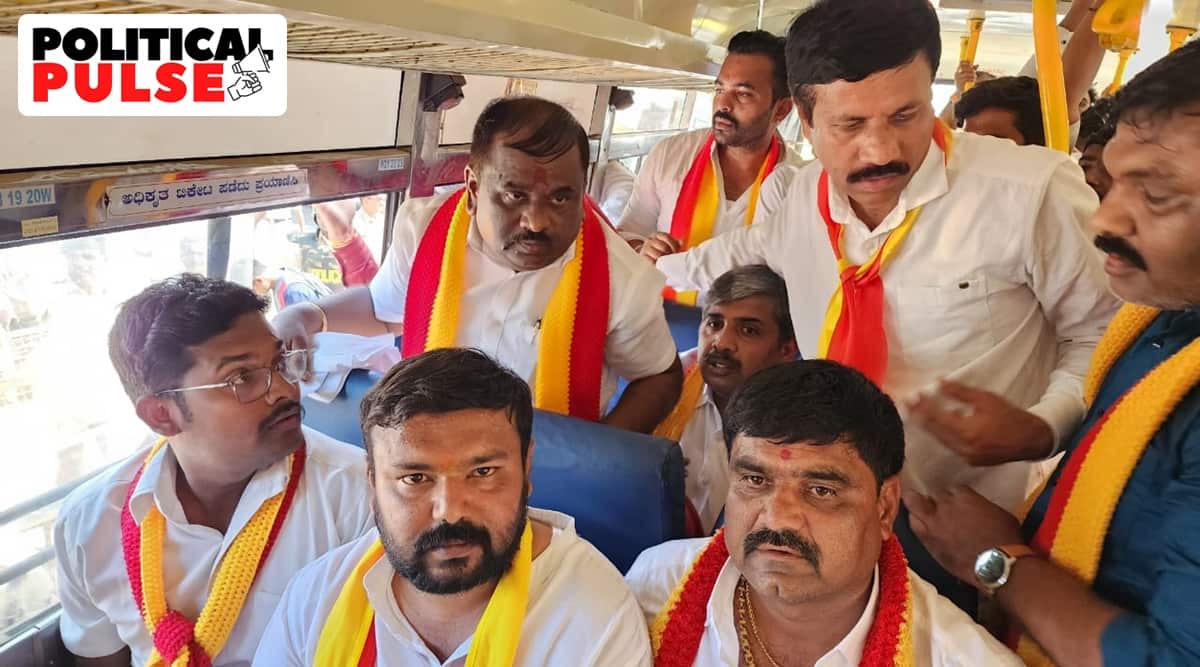 On Tuesday, thousands of KRV men set off for Belagavi district, as a warning to Maharashtra to not have any plans on the district that remains a bone of contention between the state and Karnataka. (Express photo)

EVEN AS both state governments proclaimed a lowering of temperatures over the Belagavi issue, the Karnataka Rakshana Vedike – an outfit known to fish in such troubled waters – has brought matters to a head.

On Tuesday, thousands of KRV men set off for Belagavi district, as a warning to Maharashtra to not have any plans on the district that remains a bone of contention between the state and Karnataka. Stopped by police from entering Belagavi, they pelted stones at Maharashtra number plate vehicles. The violence led to statements from both sides cautioning the other against taking matters in its own hands.

Must read |As Bommai and Fadnavis breathe fire-and-brimstone on the Maharashtra-Karnataka border dispute, both know it’s all for the gallery

A pro-Kannada organisation, the KRV’s motto is: “Kannada is caste, Kannada is religion and Kannada is God”. In this self-proclaimed role of guardian of all things Kannada, the KRV, with more than 62 lakh members, takes stand on Karnataka-related issues and doesn’t hesitate to take law into its own hands.

A pro-Kannada organisation, the KRV’s motto is: “Kannada is caste, Kannada is religion and Kannada is God”. (Express photo)

While it had some presence in Karnataka, in 2005, the Vedike hit national headlines and became a household name in the state when its activists smeared black paint on the face of then Belagavi corporation mayor Vijay More, after he passed a resolution to include Belagavi in Maharashtra.

One of the frequent targets of the KRV is the Maharashtra Ekikaran Samiti (MES), a Belagavi-based socio-political committee that is at the forefront of the demand from the opposite side that the district be included in Maharashtra.

Don't miss |With BJP in power in Karnataka, Maharashtra and the Centre, the annual Belagavi border flare-up may be reined in this year

KRV general secretary Sanneerappa says his outfit has “diminished the political power” of the MES, from when it had at least six-seven members as MLAs, plus presence in the Belagavi corporation. “It is significant that an apolitical party has changed the political scenario in Belagavi district. Twice, we have forced the governments to dissolve the Belagavi corporation’s house when decisions were made against the state,” Sanneerappa claims.

There are other pro-Kannada movements in the state, largely led by Kannada Chaluvali Paksha (now it is called Kannada Chaluvali Vatal Paksha) of Vatal Nagaraj. The Gokak movement fought for first language status to Kannada in the 1980s, with Kannada film actors including stalwart Rajkumar and several writers and poets part of it.

Advertisement
Explained |What is the Maharashtra-Karnataka border dispute

The KRV came into existence in the early 2000s, led by T A Narayana Gowda, and based in Bengaluru. A garment worker from Hassan district who went on to own a garment factory, Gowda got into pro-Kannada issues via his association with a Rajkumar fans’ organisation.

Sanneerappa says that at the time, a section of the non-Kannadiga traders in Chickpet had assaulted police while demanding a train from Bengaluru to Jaipur. This coincided with all 23 vacant posts in Bengaluru of the Comptroller and Auditor General of India (CAG) going to non-Kannadigas, and a row over then Bengaluru city police commissioner directing personnel posted in areas with large Tamil- and Telugu-speaking populations to learn the language.

#Politics |‘Rowdies in the ranks’: BJP & Cong’s bitter war of words in Karnataka

The KRV started with a protest demanding that jobs be provided to the state youth, which continued for nearly two months. The Central government led by Atal Bihari Vajpayee finally capitulated and locals were hired for the CAG posts.

The first big success of the KRV coincided with the satellite TV boom and mushrooming of news channels, which helped the outfit remain in the news.

The organisation soon spread from Bengaluru to other parts of the state and today has more than 20,000 branches across the state.

While a split soon followed, with KRV Bengaluru president Praveen Shetty starting his own organisation named KRV (Praveen Shetty wing), the Vedike stayed in the news, raising emotive issues such as sharing of the contested Cauvery river water between Karnataka and Tamil Nadu, protests against Hindi “imposition”, and assault on doctors for not speaking in Kannada.

KRV members have in the past been accused of extortion, assault, and links with the real estate mafia.