Election results analysis: No one took ownership of Congress campaign in Gujarat polls. In sharp contrast, the party's story in Himachal Pradesh was entirely different. 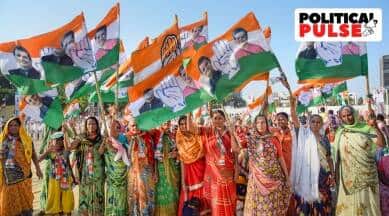 When the route that Rahul Gandhi’s Bharat Jodo Yatra would take became clear some months ago, a Congress section expressed surprise that the cross- country march would travel straight from Kanyakumari to Kashmir without entering the poll-bound Gujarat.

Adding to its surprise was Rahul’s decision to spend only a day in Gujarat to address just a couple of rallies. His presence was largely symbolic there. As the Congress clocked its worst-ever performance on Narendra Modi’s turf, there is a realisation within the Congress that the party should perhaps blame no one else but itself for its spectacular fall.

Read |How Congress frittered away its 2017 Gujarat gains: steady defections, no one face

The Aam Aadmi Party (AAP), which entered the Gujarat fray amid fanfare, has managed to walk away with a remarkable 12.9 per cent vote share and seems to have contributed heavily to the Congress’s decimation. The BJP has taken its already formidable vote percentage to over 50 and it is the Congress vote share that has plummeted below 30 per cent now.

It’s simple explanation would be that the AAP has cut into the Congress votes. So, how has the AAP managed to dent only the Congress’s support base. And, why did the Congress vacate its Opposition space in the state, where it has been out of power for two-and-a-half decades, to a new entrant so easily.

The lack of a visible and strong Congress campaign in Gujarat had been puzzling the party leaders from outside the state. The refrain in the Congress circles Thursday as poll results started trickling in, was that no one really took ownership of the party’s campaign there.

Also Read |Himachal Pradesh: Every second voter a female, but only one woman MLA

In the 2017 Gujarat polls, the Congress had undertaken an energetic and spirited campaign and won 77 of the state’s total 182 seats. Rahul was then on his way to become the Congress president. The election was a personal challenge for him before he took over the mantle from his mother Sonia Gandhi.

And Rahul had then two veterans to lean on – Ashok Gehlot, who was then the AICC general secretary in charge of Gujarat and the sharp and astute party strategist Ahmed Patel. Factional feuds is not a new story in the Congress and the Gujarat unit has not been an exception.

But with Rahul taking active interest in the Gujarat campaign and the two veterans in charge of the state, the party had then managed to keep its internal feuds under check. The campaign had a purpose and direction and the leaders and the cadre perhaps felt the party had a genuine chance of upsetting the BJP apple cart.

Rahul was busy with the Yatra. Gehlot, the Rajasthan Chief Minister, was appointed as the senior party observer in Gujarat but he was preoccupied with his own problems in his state. His efforts in Gujarat were at best half-hearted. He had been feted earlier as the master strategist who almost won the Congress the state last time.

The Gujarat Congress unit’s president Jagdish Thakor is a veteran but party leaders say he could not come out of Bharatsinh Solanki’s shadow. He reportedly lacked “spark and fighting spirit”. Also, the party’s other big guns – be it Arjun Modhwadia, Shaktisinh Gohil or Siddharth Patel – all worked in silos. There was no coordination among them.

Another key hurdle for the Congress in Gujarat was resources. The Gehlot-late Ahmed Patel duo had managed resources efficiently. The idea behind putting CM Gehlot in charge of the party’s current campaign was that he would manage the resources effectively. The party also appointed former Rajasthan minister Raghu Sharma, who was considered close to Gehlot, as the state in-charge, hoping that the duo would work in tandem to boost its poll prospects.

But sources said the ties between Gehlot and Sharma had soured. Sharma, sources said, would tell the AICC leaders whom he met in Gujarat or Delhi to put in a word with AICC treasurer P K Bansal to release more funds.

The Congress’s campaign narrative in Gujarat was not convincing, too.

In sharp contrast, the grand old party’s story in the Himachal Pradesh polls was entirely different. The party’s campaign was much better in the hill state on various scores.

AICC general secretary Priyanka Gandhi Vadra sensed very early that the party had a fighting chance in Himachal. Keen to ensure a victory under her belt – she had spectacularly flopped in the Uttar Pradesh polls held earlier this year – Priyanka worked closely with Chhattisgarh CM Bhupesh Baghel for the Himachal campaign. They had worked together in UP as well.

Priyanka was involved in the design and planning of the campaign and ticket distribution, taking a lot of feedback from the ground, where she put in place a team.

The party identified early the issues which could hurt the ruling BJP in Himachal – among them the demand for restoration of the Old Pension Scheme (OPS), unemployment, resentment against the Agniveer scheme and price rise. Priyanka addressed five rallies across the state – in Solan, Mandi, Una, Kangra and Sirmour. Baghel too camped there.

While there were rumblings within the Himachal Congress over the election ticket distribution, the resources were better managed and the party was able to build a narrative around the poll promises of providing one lakh jobs, restoration of the OPS and financial assistance of Rs 1,500 to every woman in the state.

Factionalism in the Congress was rampant in Himachal too. The Himachal PCC’s president Pratibha Singh and her son Vikramaditya never saw eye to eye with former state party chief Sukhvinder Singh Sukhu or Leader of Opposition Mukesh Agnihotri. All of them are chief ministerial aspirants. The party leadership however did not allow their differences to hurt the party’s prospects.

The campaign after all was led by Priyanka. And the message was clear: the party was going all out to wrest the hill state from the BJP.

Anvitaa Dutt delves into Qala spoilers, the fate of Babil Khan’s character and why Amit Sial was the focus of terrace scene