Kiren Rijiju to AAP chief on Delhi Minister video: Why are you allowing such hatred? 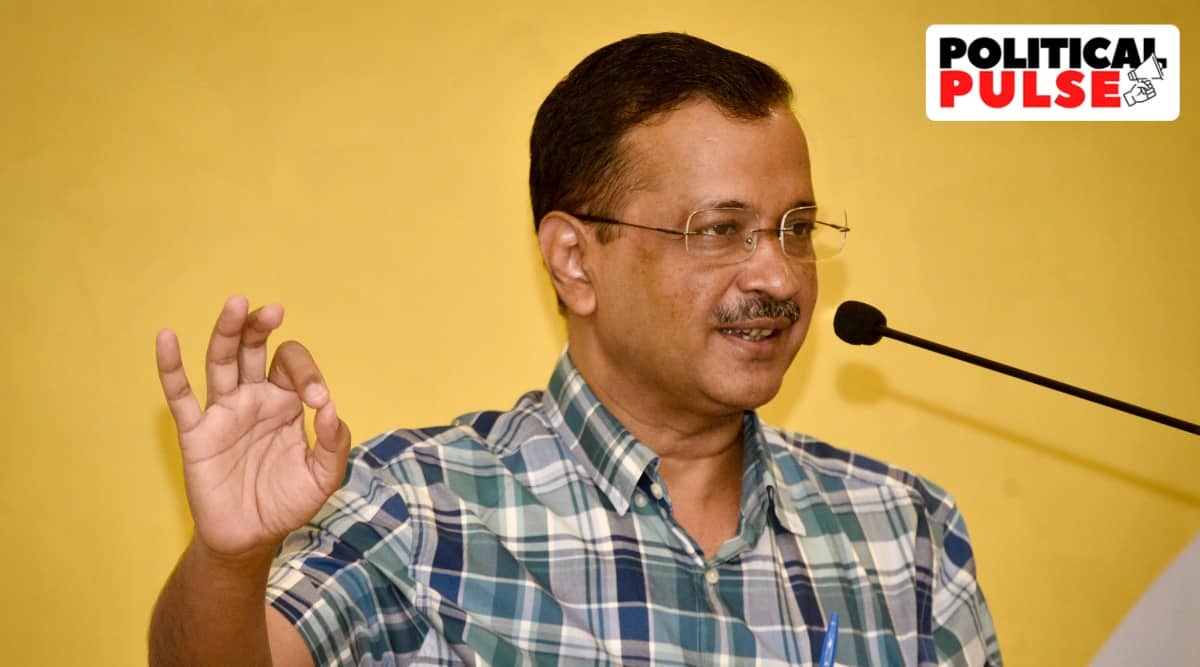 ON THE day Arvind Kejriwal started his latest campaign visit to Gujarat, where Assembly elections are around the corner, a series of posters came up on streets in several parts of the state Saturday depicting the AAP chief in a skull cap and calling him “anti-Hindu”.

The ruling BJP in the state denied any role in the posters, which came up in the wake of purported video clips of AAP’s Delhi Minister Rajendra Pal Gautam at a “religious conversion” event. Later Saturday, one such clip was posted on Twitter by Union Minister Kiren Rijiju with a tweet asking Kejriwal why he was “allowing such hatred”.

Also Read |Who is Rajendra Pal Gautam, AAP minister in eye of storm?

Rijiju had late Friday night tweeted to ask why the AAP leader “and his gang hate” Hindus and Hindutva. Kejriwal’s response came during a speech in Vadodara where he declared that he was born on “Krishna Janmashtami” — and that God has sent him “to deliver people” from the “children of (the demon) Kans”.

Kejriwal ji why are you allowing such hatred?
Our gurus said, there’s no difference between Hinduism & Buddhism with roots in the Culture of Ancient India.
Modi Ji made Buddhism core part of India’s global approach, & accorded Official status to Buddha Jayanti for the 1st time! https://t.co/eqczOCkbe6 pic.twitter.com/N9cj9bqNU5

The latest political firestorm in Gujarat was sparked by several posters that came up on streetside walls in Ahmedabad, Rajkot, Surat and Vadodara. Most of these posters, with images of Kejriwal wearing a skull cap and messages falsely attributing anti-Hindu remarks to the AAP leader, were signed by an unknown self-styled outfit called Hindu Hitrakshak Samiti. Most of them had a common line: “These are the words and the culture of Aam Aadmi Party.”

On Friday, the Gujarat BJP’s official handle had tweeted clips of the purported video of AAP Minister Gautam with derogatory captions. “These imposters who administered oaths to not worship Hindu Gods and Goddesses, will not succeed in Gujarat,” the video said.

Read in Explained |Ambedkar’s 22 vows: Why Babasaheb made the pledge at the centre of BJP-AAP row

On Saturday, while posting a purported clip of the AAP Minister, Union Minister Rijiju tweeted: “Kejriwal ji why are you allowing such hatred? Our gurus said, there’s no difference between Hinduism & Buddhism with roots in the Culture of Ancient India. Modi Ji made Buddhism core part of India’s global approach & accorded Official status to Buddha Jayanti for the 1st time!”

Asked about the posters on Kejriwal, Gujarat BJP co-spokesperson Rutvij Patel said, “The BJP has nothing to do with it. It is a spontaneous outrage of the public.” Later, in a press release claiming that some AAP office-bearers in Jamnagar had joined the party, the BJP said: “Angry with the anti-Hindu vows taken by the Aam Aadmi Party minister whose videos went viral, 15 former office bearers of AAP with 200 workers, joined BJP.”

While several of the posters were taken down by AAP members in Rajkot, Kejriwal said in Vadodara: “You have disrespected God by putting up such posters… You all are children of Kans, who disrespect God in such a manner… they disrespect devotees, resort to hooliganism. I am a religious person, I am a staunch follower of Hanumanji and I have abundant blessings from Lord Hanuman. I want to tell them, I was born on Krishna Janmashtami… I am born to annihilate the children of Kans. God has sent me with a special task to deliver people from such children of Kans. All these demonic powers have united against me… The people want a change and you can hate me as much as you want but if you disrespect God, he will not forgive you.”

Speaking to The Indian Express, Gujarat AAP’s general secretary Manoj Sorathiya said: “We have asked the police department to find out who is involved (in the posters).”

Banners saying “anti-Hindu Kejriwal go back” were seen in Dahod town, too, where Kejriwal and Punjab Chief Minister Bhagwant Mann reached Saturday as part of their two-day visit to the state.

(With ENS in Rajkot and Ahmedabad)