Rajnath blamed opponents for creating a divide between the Jammu and Kashmir regions. 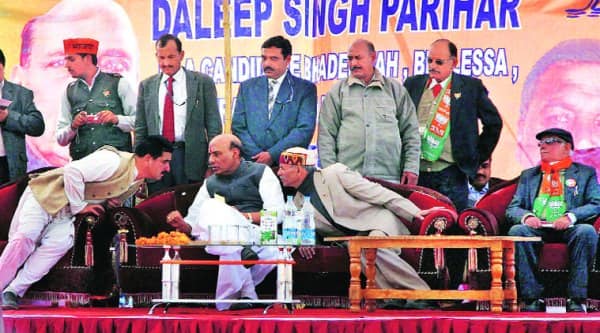 Home Minster Rajnath Singh with other BJP leaders at a rally in Bhaderwah on Wednesday. (Source: PTI)

Accusing the BJP’s opponents of trying to create a wrong impression of the party by raking up Article 370, Home Minister Rajnath Singh said on Wednesday that the party only wants a discussion on it and the final decision will rest with the people.

“It is being said that the BJP will repeal Article 370. They have been asking the BJP to make its stand clear,” Rajnath said at a rally, referring to statements by the National Conference, the Congress and the PDP.

“I will ask you, why are you trying to mislead the people of Jammu and Kashmir? Why have you destroyed J&K despite Article 370? Why are you talking about Article 370 instead of good governance, development and prosperity at the time of polls?”

The BJP, which had earlier been demanding a repeal, has subtly softened its stand since the Lok Sabha polls when Narendra Modi, campaigning in Hiranagar, called for a discussion on how far Article 370 has benefited the common man.

Rajnath hit back at opponents by referring to the 73rd Amendment to the Constitution for empowerment of panchayati raj institutions.

Pointing out that all funds from the Centre were being transferred to elected panchayats elsewhere, Singh said, “Have panchayats in Jammu & Kashmir too got funds? Did the state government transfer these funds?”

“I assure you that if a BJP government comes to power, we will implement the 73rd amendment. Panchayati raj institutions in the state will be strengthened,” he said.

Rajnath also blamed opponents for creating a divide between the Jammu and Kashmir regions. He recalled how Narendra Modi and many union ministers had visited the state during the recent floods, and how Modi had offered help even to the people of PoK.

He mocked Pakistan, though: “It tells the UN that Kashmir is a disputed area and there should be discussion on it. What has it done to PoK?

Had Pakistan developed PoK, I would have accepted that it could develop Jammu and Kashmir too.”