Union Minister Anurag Thakur tells The Indian Express, "AAP shut shop a long time back ... There is a direct fight between BJP and Congress. But Congress won’t be able to open its account." 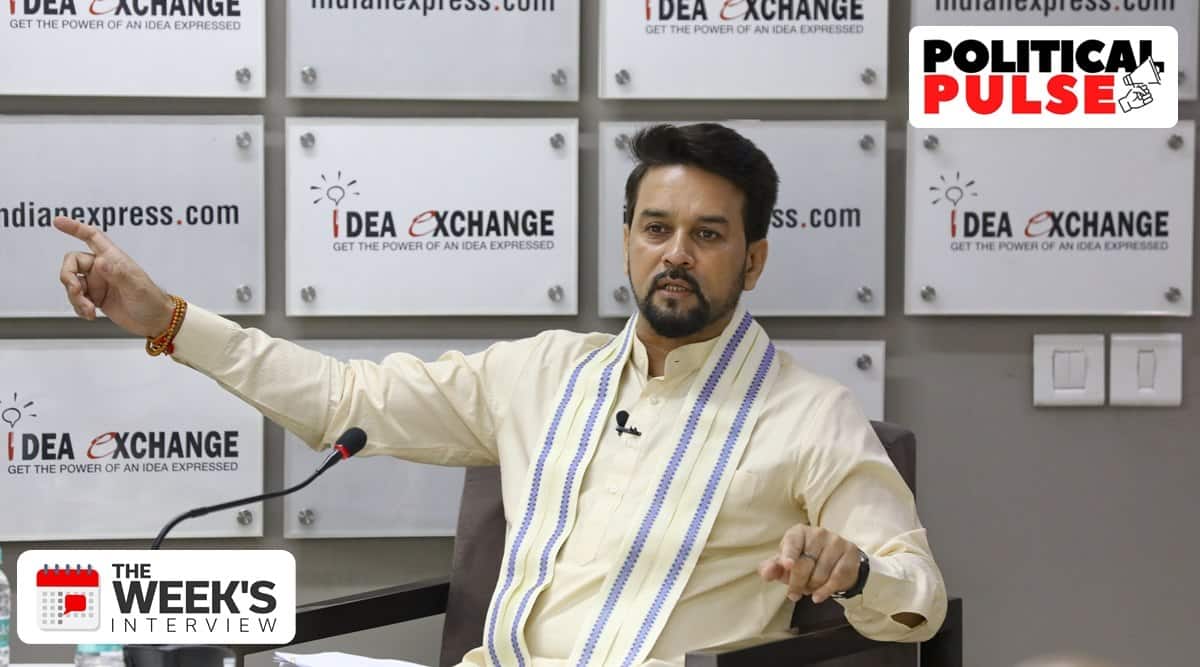 Union Information and Broadcasting Minister Anurag Thakur has a busy election schedule in Himachal Pradesh, his home state. He is addressing 15-16 rallies, big and small, a day. These begin early in the morning and continue late into the night. He tells The Indian Express that the party will increase its tally in Himachal Pradesh and break records in Gujarat.

Delhi Deputy Chief Minister Manish Sisodia declared you as the Himachal Pradesh chief ministerial candidate of the BJP a few months ago.

The Jai Ram Thakur government has done wonderful work in Himachal Pradesh. The BJP is fighting the elections under the leadership of Jai Ram ji and there are no ifs and buts in this.

What do you think about the AAP in Himachal?

They shut their shop a long time back.

There is a direct fight between the BJP and the Congress. But they won’t be able to open their account.

What are the highlights of your manifesto?

There is a separate Sankalp Patra for women. It promises 33% reservation for women in government jobs, Rs 25,000 for a pregnant woman, a bicycle for a girl child from Class 6 to 12, and a Scooty for a college-going girl. Apart from that, three LPG cylinders for poor women. Also, a two per cent interest subvention for self-help groups and interest-free loans for homestay women (the women running homestay facilities). Apart from that, other ailments will be covered under Ayushman Bharat and Himcare which were not covered earlier for women.

Don’t you think a bicycle and Scooty fall in the category of freebies?

No, they are (tools of) empowerment. We want to encourage all girls to go to school. It is going to help them, strengthen them.

Is the BJP coming back to power?

Of course, yes. There is no doubt about it. The double-engine government has done well in all sectors, whether it is roads, rail, health, education, water or any kind of infrastructure. Apart from that, social welfare schemes are a great hit.

How many seats do you expect to win in Himachal?

We will win more than last time. We will cross the 44 mark.

In Gujarat, we will break all the records of the last 30 years. It is going to be a historic win for the BJP. Prime Minister (Narendra) Modi’s development work and what the double-engine government has delivered there are appreciated by one and all.

Dharamshala has a world-class stadium, Nadaun has a state-level stadium. The Indira Gandhi stadium at Una has got all the facilities, but it has not got any definite sports culture. Sometimes cricket matches are held at Pekhubela.

Also Read |In own seat Seraj, Himachal CM Jai Ram Thakur clear winner: ‘Did in 5 years what was not done in 50’

We have three grounds in Una (district): Santoshgarh, Pekhubela, and Una. So we have a lot of matches. It depends on what time they are playing the match and what activities are happening at the Indira Gandhi stadium.

Haryana is known as a nursery of boxing, Punjab is famous for hockey. Any plans for Himachal?

The Government of India is opening 1,000 Khelo India centres across the country. Apart from that, we have 23 National Centres of Excellence (in the country). We are also running Target Olympic Podium Scheme (TOPS) which looks after elite athletes. So, we are already running several projects all over the country, including Himachal Pradesh. Khelo India games, University games or youth games are very very popular where the youths are breaking national records.

You have a two-time chief minister at home as your father (Prem Kumar Dhumal) and a two-time Prime Minister (Narendra Modi) at your office. Who is more strict?