The young TN BJP chief, a former police officer seen to have the blessing of national leaders, gets police rap for making claims without basis 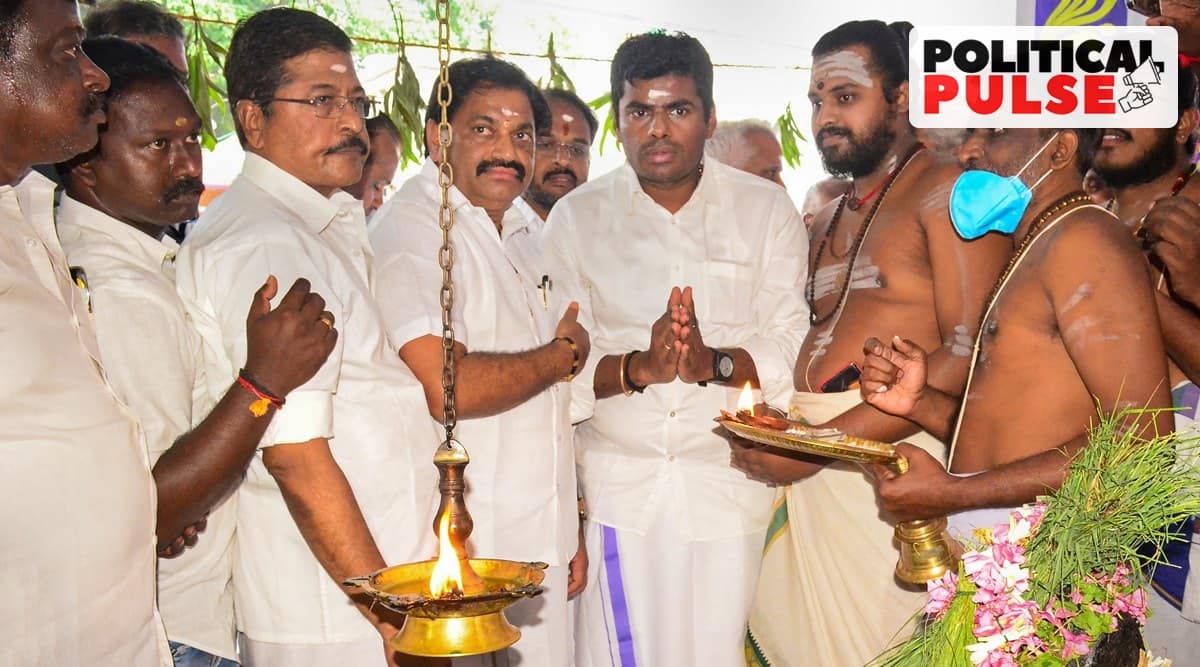 Was the LPG cylinder blast — in a car in front of Sangameswarar Temple, Coimbatore, around 4 am on October 23, 2022 — a suicide bomb attack, or did it accidentally explode on its way to another target? Maybe it exploded while being transported from accused Mubeen’s house to another safe house for a likely plan later.

All of the above scenarios are plausible, and are being investigated, but the issue has precipitated a new internal party problem for BJP state president K Annamalai, who not only jumped the gun and kept making claims on the basis of inconclusive details, but was thereafter stumped by a state police statement that named him, and then ended up clashing with his senior leaders from Coimbatore.

Annamalai has gained attention since taking office as the state BJP chief for a number of reasons, including his young age of 37, his past as a proactive IPS officer in Karnataka, and the support of some of the party’s most important national leaders. His own enthusiasm and excitement for routine political affairs have only helped the BJP increase its visibility in the state.

A senior RSS leader from Coimbatore said, “But there will be consequences too, for what he is.” This leader believes that Annamalai was the one who started the ball rolling after the Coimbatore blast, “but he had to retract when things went beyond his hands”, referring to a call for a bandh by BJP leaders of Coimbatore that was later withdrawn.

On Saturday, the state police force issued an unusual statement, mentioning Annamalai by name and asking him to “stop spreading rumours” about how the case is being handled, mostly through tweets and comments in his media interactions.

“A state party leader like Annamalai shouldn’t have used those details hastily in his tweets. He should have waited to see if the investigation was going in the right direction,” the RSS leader said.

Another senior RSS leader in Chennai said it wasn’t Annamalai’s mistake, but his misunderstanding of the issue as state chief. “Despite having NIA-trained officers who knew Mubeen, a Special Investigation Unit (SIU) that was focused on internal security at Coimbatore, failed to track him. Why didn’t they follow him? Did they monitor him, at least once, after the 2019 examination? If there were lapses, were they punished? Annamalai should have noticed these specific lapses in internal security monitoring and focused more on the incident and its causes, rather than tweeting bits and pieces of information he got,” he said.

Coimbatore Cylinder blast is no more a ‘cylinder blast’. It’s a clear cut terror act with ISIS links.
Will @CMOTamilnadu come out in the open & accept this?
TN Govt is hiding this info for 12 hours now. Is this not a clear failure of the state intelligence machinery & DMK Govt?

Amid many such tweets and statements, the party’s leadership in Coimbatore declared a bandh on October 31 to protest against the DMK government’s “lethargic” handling of the investigation. This prompted a Coimbatore businessman to file a petition with the Madras High Court, asking for the bandh to be suspended.

In the court, Annamalai had to disown the bandh called by his own leaders. He said he had never issued such a call. His submission in the court on October 28 was hours after one of the party’s four MLAs, Vanathi Srinivasan of Coimbatore (South), declared that nobody could stop the bandh. Citing requests from industrialists, the leadership later had to decide to “temporarily postpone” the bandh.

Many in the party indicate it was a cold war between Annamalai and two top leaders from Coimbatore, C.P. Radhakrishnan and Srinivasan MLA, that resulted in the developments surrounding the bandh. “Leaders here (in Coimbatore) also had to be equally enthusiastic as Annamalai was in handling the car blast case,” said a senior BJP leader in Coimbatore.

A senior state police officer who handled the case said: “Initially, Annamalai claimed that the government was concealing information, but the DGP himself arrived in Coimbatore just a few hours after the explosion as we realised how serious it was. The case was solved in 48 hours. Nine important people were in our custody within hours, one more later, and six arrested within a week. By the third and fourth day of the probe, only the conspiracy and larger network remained. At this stage, I was surprised to see Annamalai handling misinterpreted information to tweet and issue statements, which is most unbecoming of a politician, especially during the initial days of a probe,” he said. The officer said Annamalai’s comments were immature and spread more unfounded rumours about the incident.

He also noted that the October 29 state police statement, naming Annamalai in particular, was unusual.

Read More |Coimbatore blast: Trio seen on CCTV were reported to police by mother of two of them

Coimbatore city police commissioner V. Balakrishnan also told The Indian Express that they were able to complete about 90 per cent of the probe within a week before they turned it over to the NIA last weekend.

Lately, Annamalai too has softened his stance. He praised the state police for their quick response to the blast on Monday, but continued to criticise the police leadership.

After calling out Kapil Sharma over The Kashmir Files, Anupam Kher returns to his show and kisses the host