Senior Congress leader miffed over lack of action against Ashok Gehlot loyalists show-caused for allegedly precipitating a crisis in the party in September. 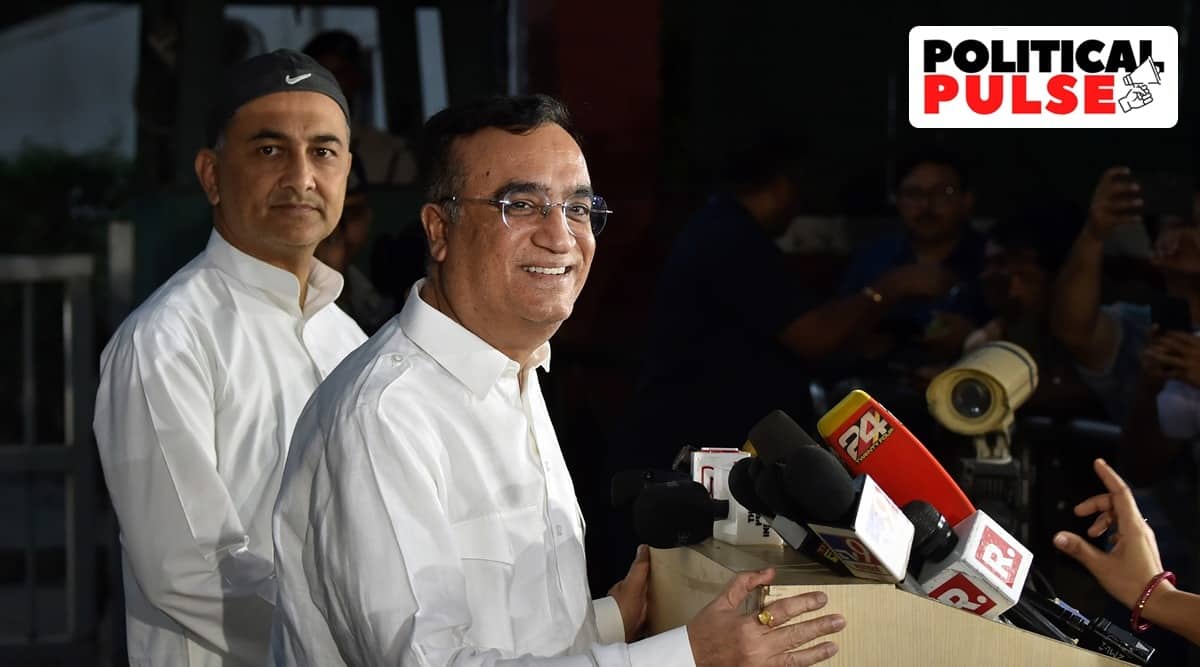 Just a fortnight left for the Bharat Jodo Yatra to enter Rajasthan, there is trouble in the Congress. Upset over no action being taken against the three loyalists of Chief Minister Ashok Gehlot who were given show-cause notices for holding a parallel Congress Legislature Party (CLP) meeting in Jaipur on September 25, All India Congress Committee (AICC) in-charge of the state Ajay Maken has resigned.

Only in Express |Ajay Maken: ‘CLP meet was called after talks with Ashok Gehlot, date and time decided… It’s not that we just landed here’

It is learnt Maken has told Kharge that he does not have any “moral authority” to continue as AICC general secretary in charge of the state when there is no resolution to the issue over MLAs’ boycott of the CLP meeting that the high command had convened. Moreover, the three senior leaders who Maken believes indulged in “grave indiscipline” are being given responsibilities for coordinating the yatra in the state.

“I don’t have any moral authority left. With what authority I will interact with the MLAs or discharge my duties as in-charge. There was grave indiscipline but there was no action. Not even an apology,” he is learnt to have conveyed to the leadership. Kharge, however, did not accept his resignation and asked him to continue. Having waited for a week, Maken has now resigned.

Maken, sources said, also stayed away from a meeting earlier this week of a task force set up by the party to coordinate the Bharat Jodo Yatra. The committee took stock of the preparations for the yatra as it prepares to enter the Hindi heartland in a few days. From Maharashtra, the yatra will enter Madhya Pradesh next week and Rajasthan in the first week of December. Moreover, a by-election to the Sardarshahar Assembly seat in Churu district is slated to take place on December 5.

Maken has told Kharge that it is imperative to have a new person In charge of the Rajasthan unit as soon as possible given the Yatra and the by-election. Interestingly, Kharge was the AICC observer and was witness to the drama that unfolded in Jaipur on September 25. Kharge and Maken were in Jaipur to hold the CLP meeting that was to pass a resolution authorising the Congress president to appoint a new leader.

Don't miss |Crisis in the Maken: 5 reasons the gen secy in-charge of Rajasthan Congress is a factor in its current mess

The CLP meeting was called after Gehlot announced his decision to contest the high-stakes Congress presidential election. But the chief minister was keen to continue for some more time, at least his election as the Congress president. But the high command was keen that he step down and make way for a new leader before filing his nomination papers.

But Gehlot supporters sprang a huge surprise. They not just boycotted the CLP meeting but held a parallel meeting at Dhariwal’s residence and then symbolically submitted their resignations to Speaker CP Joshi, leaving the high command red-faced. Gehlot wanted the views of the MLAs to be heard on the issue of selecting his successor. He was also keen that a leader close to him be appointed the successor if he had to step down. He was against former Deputy CM and Tonk MLA Sachin Pilot taking over as CM.

The unprecedented rebellion was a huge embarrassment to the leadership, which issued show-cause notices to Dhariwal, Joshi, and Rathore after two days based on a report by Maken. The notices made it clear that they had committed “grave indiscipline” by boycotting the CLP meeting and holding the parallel meeting.

In the eye of the storm over the defiance of MLAs loyal to him, Gehlot, after a meeting with the then Congress president Sonia Gandhi four days later, declared he would not contest for the post of Congress president and publicly revealed that he had apologised to Gandhi for the turn of events in Jaipur.

Maken’s decision to resign despite prodding from Kharge to continue is the first organisational challenge the new Congress president has encountered. “Wedded to the ideology of Congress for the last three generations and being in active Congress politics for over 40 years, I will always remain an ardent follower of Rahul Ji, whom I trust and have faith in beyond words,” Maken said, concluding his one-page letter.

Watch: Woman sings ‘Mere Dholna’ at 3 am in an empty basement, netizens wonder about neighbours’ reactions