Kerala Leader of Opposition VD Satheesan, believed to be one of the MP’s detractors in the party, says “groupsim” won’t be allowed to interfere with UDF’s comeback project. 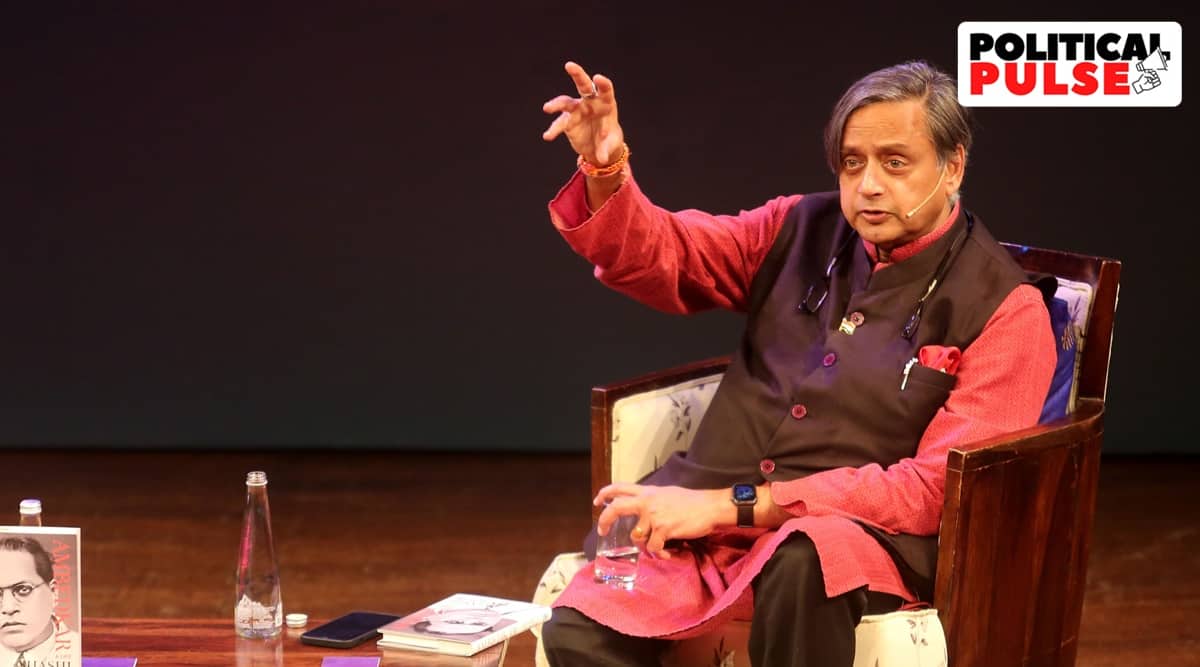 Tharoor’s visit to north Kerala has caused discord in the state unit after the Youth Congress was forced to pull out of an event in Kozhikode where the Thiruvananthapuram MP was scheduled to talk about “Sangh Parivar and the challenges to secularism’’. (Express Photo By Ganesh Shirsekar/File)

A day after Kerala Pradesh Congress Committee (KPCC) chief K Sudhakaran asked party leaders not to make public statements on differences arising out of the Shashi Tharoor episode, senior Congress MLA and Leader of Opposition VD Satheesan on Tuesday warned that factionalism would not be allowed in the party.

“After the defeat in the last Assembly elections, the Congress in Kerala is trying to make a comeback,” Satheesan told reporters in Thiruvananthapuram. “All leaders are working together. Every leader has space in the party. We haven’t taken away anyone’s space in the party. When the party is working unitedly for a comeback, we cannot allow any type of groupism or parallel activity from any leader.”

Tharoor’s visit to north Kerala, which began on Sunday, has caused discord in the state unit after the Youth Congress, at the behest of Congress, was forced to pull out of an event in Kozhikode where the Thiruvananthapuram MP was scheduled to talk about “Sangh Parivar and the challenges to secularism’’. Tharoor initially brushed off the incident but later demanded an internal inquiry into the matter. Some believe that he is looking to play a more active role in state politics following his failure to win the Congress presidential election in October.

Tharoor’s backers in the party such as former KPCC president and Vatakara MP K Muraleedharan and Kozhikode MP MK Raghavan have criticised his detractors and said the way things unfolded in Kozhikode on Sunday should not have happened. Muraleedharan also alleged that “those eyeing the chief minister’s post are behind it”.

Tharoor on Tuesday met the leaders of Congress ally Indian Union Muslim League (IUML) in Malappuram. After the meeting, he said, “I am not for factional politics. I have no plan to float any group in the party. I am trying for a united Congress in Kerala. Myself and M K Raghavan are standing for the party. We want to see a united party. What is required is a united Congress.”

Earlier in the day, Satheesan told reporters that the Congress and the party-led United Democratic Front (UDF) were going ahead with a clear action plan for the Lok Sabha elections in 2024. “At any cost, we cannot allow the factional work of any leader. What is going on now in the party cannot be permitted in any political party,’’ he said.

Without naming anyone, the senior legislator said balloons inflated by the media would burst with a prick of a pin. “We are not balloons that will collapse when pricked with a pin,’’ he added.

When Raghavan’s role in organising Tharoor’s programmes in north Kerala was pointed out, Satheesan said “The involvement in parallel work will be taken seriously. If anyone is found indulging in such parallel work, they will be given the opportunity to withdraw.”

The Leader of Opposition also drew attention to Tharoor’s absence from his constituency at a time the party has been holding public protests against the CPI(M)-ruled municipal corporation in the state Capital against an alleged jobs scam.

Meanwhile, Tharoor met IUML chief Syed Sadiqali Shihab Thangal and senior IUML leader PK Kunhalikutty on Tuesday. He also visited the Congress District Committee office in Malappuram but senior leaders were conspicuous by their absence. DCC president VS Joy said there was nothing unusual in the absence of the party leaders at the time of Tharoor’s visit.

But the Thiruvananthapuram MP received a warm welcome from the IUML, which has a considerable stake in UDF politics. “Tharoor is a good campaigner. He is not a leader who should be confined to Thiruvananthapuram alone,” said Thangal.

Srikanth Meka rubbishes rumours about his troubled marriage with Ooha