Isudan Gadhvi: ‘AAP’s not a third party in Gujarat, but the party in Oppn… Cong never had a vote bank here’

“Gujarat polls would earlier be fought on communal lines, BJP set the narrative, Cong fell for the trap... For the first time, issues are education, health... Our focus is only on what can be given to the people of Gujarat,” says AAP national joint general secretary 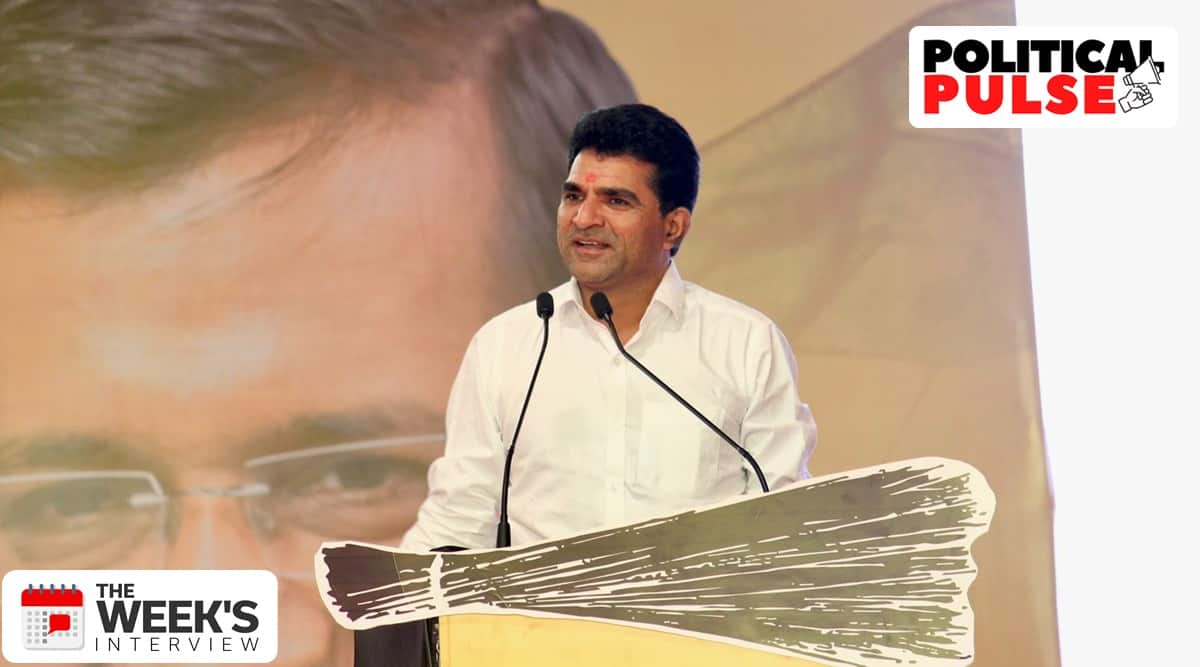 A former TV journalist, Isudan Gadhvi, 40, is the national joint general secretary of Aam Aadmi Party. He speaks on BJP’s efforts to “divert” people from real issues, the Congress’s decline, and AAP’s silence on issues like the Kheda flogging. Excerpts:

The BJP has attacked AAP Gujarat president Gopal Italia over comments he made regarding Prime Minister Narendra Modi and women attending religious events in the past.

Gadhvi: The videos are not the issue. They want to dig out old videos, not address the problem of inflation… say instead, ‘Look at Italia’s video and vote for us’. If videos had been the issue… many have used offensive language, Hardik Patel has abused so many times, even (BJP state vice-president) Gordhan Zadaphia has… They are troubling Italia because he is a Patidar, and given the Patidar agitation, they hate Patidars… Italia is no bootlegger, he was not involved in any corruption.

Read this story in Gujarati

I have heard that the BJP even made CDs on Hardik Patel, but people were not bothered… They have bought over everyone, they have silenced Hardik Patel, Gordhan Zadaphia. Italia is the only one fighting the BJP, and all the Patidars are with him. People have stopped supporting Hardik because he joined the BJP… The people of Gujarat are angry with this act of the BJP… I have heard that when Italia goes to the National Commission for Women (due to the complaint against him based on a video), the Patel community will take out rallies in his support.

The party has been focusing on tribal districts. What are the issues you have identified in these areas?

Gadhvi: We are here for ‘vyavsay-lakshya rajneeti (occupation-oriented politics)’, for the old, unemployed youth, poor, farmers, Adivasis. When elected to power, we will implement the Panchayat Extension to Scheduled Areas (PESA) Act, empower gram sabhas. The Adivasi issues of jal (water), zameen (land), jungle (forest) will be dealt with. We will build good schools and mohalla clinics. In the Tribal Advisory Committee, the chairperson is the Chief Minister, a non-Adivasi, how can he deal with an Adivasi issue?… Why is an Adivasi not able to grow? Because there are no good schools. Such a student cannot compete with a student studying in a city like Ahmedabad. He can’t even reach the merit to avail the reservation entitled for them… We will first work on these basic things… then on the complex issues.

Why did the AAP alliance with the Bharatiya Tribal Party break?

Gadhvi: They broke up with us. It had nothing to with us… Many good BTP leaders have started joining AAP.

Can there be an alliance with them in the future?

Gadhvi: Yes… we never broke up with them.

Gadhvi: People are bored with all this… They put up the posters in such a hurry, they should have worked the same way on the pandemic, the paper leaks, against inflation, corruption. Whatever the BJP is doing, is upsetting the people, it’s backfiring. Kejriwal never said those words (on the posters). They are demeaning gods in the name of Kejriwal… Ye rakshas vritti hai, Ravan bhi aise hi karte they, Kansa bhi aise hi karte they, aur ye BJP bhi aise hi karti hai (These show their demonic instincts. Ravan would do the same, as did Kansa, and now the BJP).

But isn’t AAP also playing the religion card with promises like taking pilgrims to Ayodhya, and Kejriwal comparing himself to Lord Krishna fighting Kansa?

Gadhvi: Every child wants their parents to be able to go on a pilgrimage, but some are not able to afford it. So as soon as the Ayodhya temple is constructed and AAP forms a government in Gujarat, it will make arrangements for any senior citizen who wants to visit it. Funds can be easily arranged, from confiscating the property of any BJP person.

BJP leaders have also been attacking AAP over the ticket it once gave to Medha Patkar, who had led the agitation against the Narmada dam. Do you think this will backfire?

Gadhvi: In 2016, the BJP was with (PDP leader in Kashmir) Mufti Sayeed, with a terrorist. We don’t know who Medha Patkar is… There is no Medha Patkar in our party. If she is not in our party, why should we comment on it?… Anyone who is anti-Gujarat should be removed, even (BJP state chief) C R Paatil. I don’t know what happened at that time… This is like accusing the BJP of declaring Sonia Gandhi as the next presidential candidate.

Why has the party refrained from commenting on the recent communal incidents, including the Kheda flogging? Or on the remission of convicts in the Bilkis Bano case?

Gadhvi: The focus should be on what can be given to the people of Gujarat – good law and order, electricity, good education, etc. After Narendra Modi left, no one in the BJP is capable of running a government. We should free Gujarat from the BJP, Gujarat is not safe… Kanoon vyavastha BJP ke chalane ki bas ki baat hi nahin hai, bahut budhe ho gaye hain (Maintaining law and order is no longer possible for the BJP, they have grown too old)… The law and order situation in Gujarat is worse than in Uttar Pradesh and Bihar.

Why are there no minority leaders in your party?

Gadhvi: We do not get into that type of politics. We only do kaam ki rajneeti (politics of getting the work done). Every person of every community should be safe, get good education, employment, electricity….

Given Gujarat’s electoral history, do you see room for a third party? Why and how do you see AAP fitting into that space?

Gadhvi: Ours is not a third party, but a party in opposition. The Congress never had any vote bank. As soon as AAP entered Gujarat, many joined AAP. A third party only enters a state when either of the two existing parties is weak. Take any example, Uttar Pradesh, Maharashtra, West Bengal. Earlier, it was different, with veterans like Keshu Bapa (the late CM Keshubhai Patel), they were (the opposition) from within. The Congress is finished here, especially after the 2021 panchayat elections…

There are two types of voters in Gujarat, pro-BJP and anti-BJP. AAP will form a government with absolute majority… The Congress is gone, and from BJP, who will want C R Paatil to be a Chief Minister? He has an anti-Gujarat mindset.

What was your vote share in the 2021 local body elections?

Gadhvi: It was 19% in Rajkot, 28% in Surat and 20% in Ahmedabad. This, when we did not have a major campaign or rally by Kejriwal or any big party leader. In Gujarat, only one who wins urban-city seats can form a government. There are 66 urban seats in Gujarat, where the BJP has been winning because it was contesting against the Congress. The BJP is not loved by the people here, it is just that there is a weak opposition. If we have elections today, AAP will form a government with absolute majority.

How do you see your journey in AAP?

Gadhvi: I wanted to work for the people, so I left my job as a journalist… I was approached by all the three – the BJP, Congress and AAP. Then, one day Arvindji invited me to meet him… I joined AAP so that I can work on my own for the people. I am satisfied with the work I am doing in AAP. There are no differences in the party. I was impressed by Kejriwal’s work in Delhi.

What are the planks that elections in Gujarat are fought on, according to you?

Gadhvi: The major issue is law and order. Everyone should feel safe in Gujarat. Previously, there was no major issue. Elections were fought on communal lines, the BJP would set the narrative, the Congress fell for the trap, the BJP used to win. This is the first time the issues are education and health. For the first time, the issue of education is being discussed, and Amit Shah went to a school for the first time. Today, Narendra Modi, being a Prime Minister, is talking about health… about benefits from the Ayushman card.

Your party is the main opposition in the Surat Municipal Corporation, its toehold in Gujarat, but it has not made a noise about any issues so far…

Gadhvi: Because we are in the opposition, there has been relief in bus fares. We stalled the sale of a corporation-owned plot worth Rs 400 crore to a builder, we fought for building good schools, good roads, stopped corruption in tax, ration shops, and many such things.