RJD’s Ramvriksh Sada currently lives in a two-room dwelling in his village with his family of 12. Now, he can call a three-storey government house in Patna home 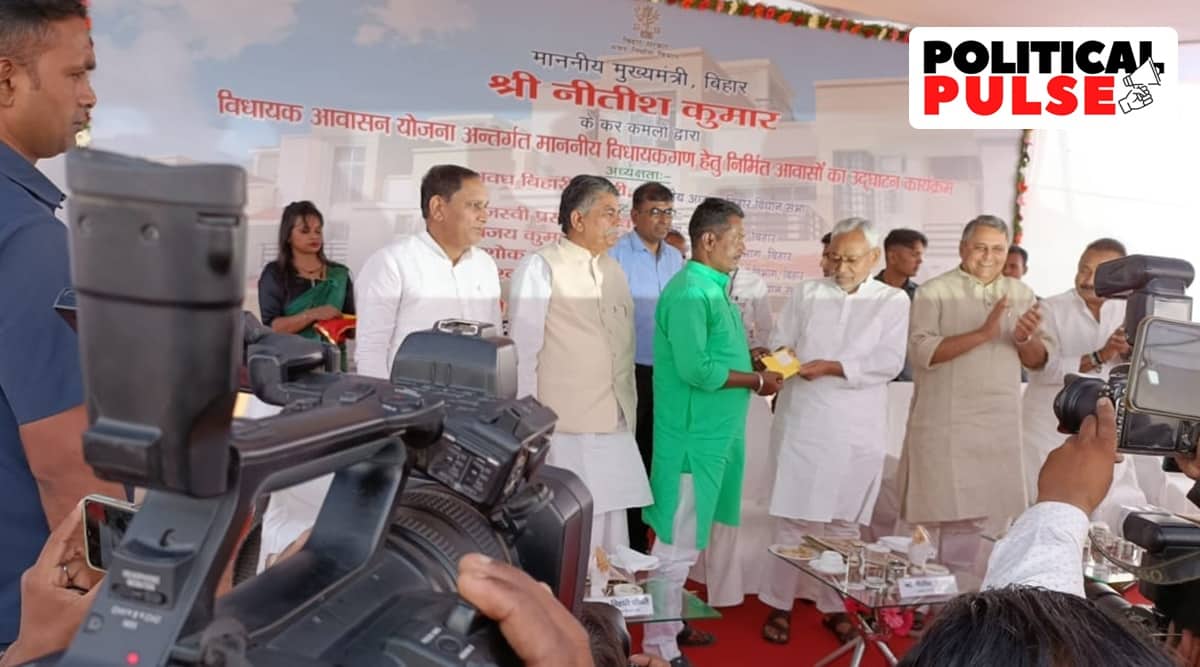 The poorest MLA in the Bihar Assembly, first-time Rashtriya Janata Dal (RJD) legislator Ramvriksh Sada still lives in a two-room home in his village Raun in Khagaria district that was built under the Indira Awas Yojana in 2004. Now, a video of Sada getting visibly emotional on receiving the keys to his new government-built home in Patna has gone viral online.

The Alauli MLA who belongs to the Scheduled Caste (SC) Mushahar community now has the keys to the three-storey accommodation at Patna’s Bir Chand Patel Path, which is close to the Bihar legislature. On October 26 (Wednesday), Chief Minister Nitish Kumar gave Sada the keys. He was among the eight lucky MLAs who received possession of their houses as part of the state government’s housing project for legislators. At the event, a grateful Sada was seen touching the CM’s feet and saying that a poor person getting a house was “no less than Diwali”. The video went viral the following day.

Sada told The Indian Express on Friday, “I became emotional after getting the keys to the government house in the heart of the state capital because I never dreamt of living in such a house. I meant it when I said that every time a poor person gets something beyond his expectation it is Diwali for him.”

The 47-year-old MLA, who has five sons and a daughter, said he still cannot believe that he now had the seven-room government house at his disposal whereas all these years he and his joint family of 12 members were living in their cramped village home.

“I decided to join politics in 1995. At the time, I worked at a brick kiln. I went to see Lalu Prasad (RJD president) during an election campaign event. I contested unsuccessfully on an RJD ticket against Pashupati Kumar Paras in 2000 and 2005 and finally made it in 2020,” Sada said, adding that he ensured that all his children received a good education. The MLA proudly said that his eldest son had a postgraduate degree.

According to Sada’s 2020 election affidavit, his assets are valued at Rs 70,000, of which Rs 25,000 is cash and Rs 5,000 cash belongs to his wife. His home in Raun, according to the affidavit, is worth only Rs 30,000 while an agriculture plot is valued at Rs 10,000. As per a voluntary disclosure that legislators are supposed to make, this year Sada again declared that he owns assets worth Rs 70,000.

The RJD leader said he studied till Class 10 and was always good at making speeches. The RJD, Sada said, backed him since 2000 when he contested for the first time. He finally made it in his third attempt in 2020 when he defeated Sadhana Devi of the Janata Dal (United). Following his victory, he renovated his home.

Sada’s victory is significant as Alauli is the constituency from where the late Ram Vilas Paswan of the Lok Janshakti Party made his electoral debut in 1969. Paswan’s younger brother and current Union minister Pashupati Kumar Paras, who heads the National Lok Janshakti Party, also made his electoral debut from Alauli in the October 2000 Assembly polls.

The event at which Sada received the key to his new home also marked the beginning of the construction of 65 three-storey homes for MLAs in the second phase of the housing project. All the homes are being built within one-and-a-half km of the state legislature at an estimated cost of Rs 450 crore. In the first phase, 55 duplex homes were handed over to MLCs in 2019. The rest of the 178 three-storey buildings for MLAs and 20 duplex homes for MLCs are in different stages of construction. Bihar has 243 MLAs and 75 MLCs.

Asked how many of his family members would now shift to Patna, Sada said, “There is a lot of excitement in my family about the house. We will decide once bypolls conclude on November 3.”

Average AQI hits ‘severe’ at most monitoring stations in Delhi