A 70-tonne vote of no confidence in Meghalaya House 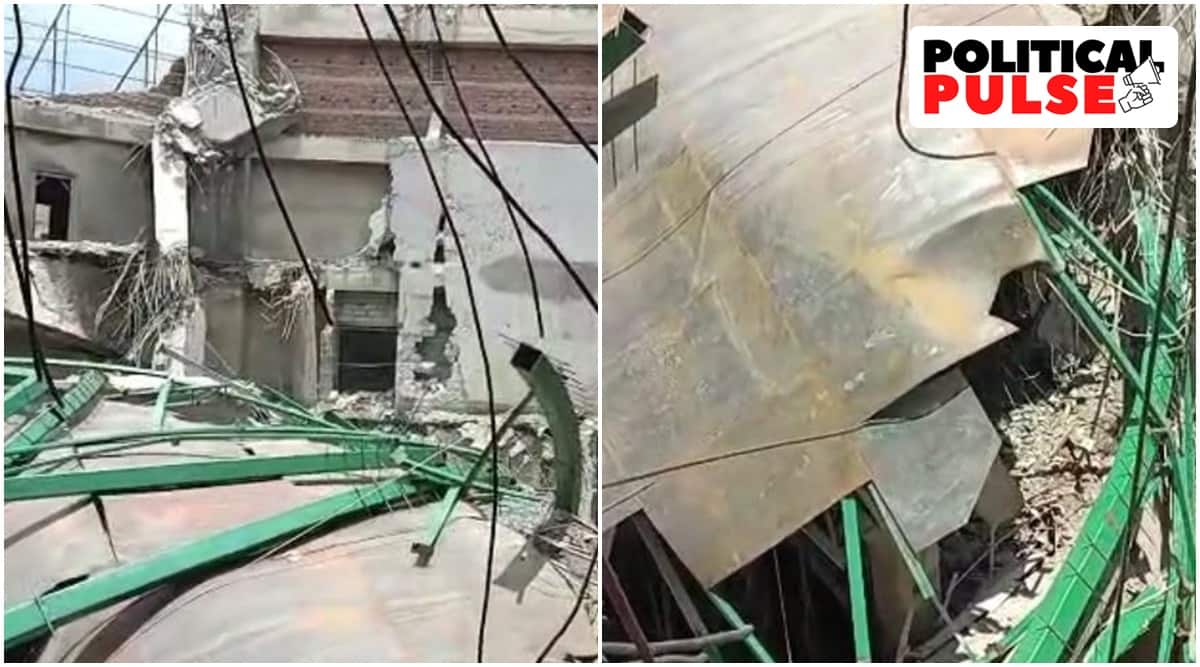 Visuals of the under-construction dome of Meghalaya's new Assembly building that came crashing down. (Screengrab)

It was envisaged to be the symbol of Meghalaya’s progress. Till, on Sunday morning, an under-construction 70-tonne dome of the state’s new Assembly building came crashing down.

What has followed is a fierce political blame game, with the National People’s Party (NPP)-led state government facing criticism from Opposition parties as well as ally BJP, and questions about alleged corruption. With the crash happening early morning, there were fortunately no injuries to any persons.

The BJP on Wednesday said it would discuss the matter with its two MLAs, one of whom is a member of the Conrad Sangma-led Cabinet. “We have two MLAs, but we were the ones to take the initiative to form this MDA (Meghalaya Democratic Alliance) government. We have decided today to call both MLAs, discuss, and send our report to Delhi to the national president. Then, we will take a call,” state BJP president Ernest Mawrie told The Indian Express.

The BJP leader also said that his party was in favour of an agency from outside the state conducting an independent enquiry. “Whatever enquiry happens in the state ends in submission of the report and the report never becomes public. Since it is a technical point, they (the government) should involve their own vigilance committee as well. Also since it is a centrally sponsored scheme, it is correlated and a decision has to be taken on a CBI (Central Bureau of Investigation) enquiry too,” he added.

Mawrie’s deputy Bernard N Marak had earlier said Sangma should either allow a CBI investigation into the incident or step down. Saying the BJP expected good governance, development, and intolerance for corruption when it supported the NPP, Marak said the Sangma government had let down his party and the people of the state.

Opposition parties, including the Congress and the Trinamool Congress (TMC), have also pointed fingers at the Sangma administration. In a statement on Wednesday, the Congress said it would wait for the findings of a High Power Committee (HPC) chaired by Assembly Speaker Methab Lyngdoh. “They need to come clean on that, have to do all sorts of auditing; they should look into the tender process, construction anomalies or whatever they had. They will be putting up some experts and we expect something positive to come out of it,” the party added.

The TMC alleged that the poor quality of the dome was the result of institutional corruption. The party leader in charge of the region, Subal Bhowmik, on Wednesday called for a judicial inquiry by a sitting High Court judge into the dome’s collapse but rejected Sangma’s decision to get an Indian Institute of Technology (IIT) to conduct a technical audit.

“I believe this audit is an attempt to hush up the issue,” he said on Wednesday. “No major corruption was ever unearthed in the northeast through such audits. The truth must be unearthed through a judicial inquiry by a sitting High Court judge.”

Opposition parties, including the Congress and the Trinamool Congress (TMC), have also pointed fingers at the Conrad Sangma administration. (Express Photo by Tashi Tobgyal/File)

Asked about calls for his resignation, Sangma said the day before that it was not up to him. “This is not my decision to say whether I will step down or not. It is the MLAs of the different coalition partners that will take the call. They are the ones who elected me and they are the ones who will decide,” the CM said.

“We have the incident at length and we have taken some decisions … We have decided to conduct a third-party audit to find out the reasons behind the collapse of the entire construction. They will also investigate the collapse of the dome and at the same time they will also look into the strength of the other areas like the left and right wings, the corridor of the main hall, reception area and the chambers of the Speaker, Chief Minister and other areas in the floor,” Speaker Lyngdoh said.

The new legislature building became necessary after the earlier one was damaged in a fire in 2001. Since then, Assembly sessions have been held in the Art and Culture Department’s auditorium in Shillong. The estimated cost of the new Assembly building in Mawdiangdiang is Rs 177.7 crore. A construction agency from Uttar Pradesh was given charge of building it and the work began in 2019. It was slated to be completed this July but now faces an inordinate delay as work will not resume, especially in the main building, till the audit report is submitted.

The authorities have initiated damage-control measures to make sure no further damages occur. Unauthorised persons are not allowed to enter the building and authorities will cover up the gaping space left behind by the collapsed dome to prevent water leakages.