International Literacy Day: A cloud of trash is hanging over Cheekoo’s head, making her the unhappiest girl in the world. On International Literacy Day, Pratham Books, for its One Day, One Story volunteer-driven campaign, chose the book that carried the message of pollution awareness—and action. A Cloud of Trash, written by Karanjeet Kaur and illustrated by Bhavana Vyas Vipparthi, published by Pratham Books, is the story of a little girl called Cheekoo, who has a cloud of trash hanging over her head. Read it here with your child! 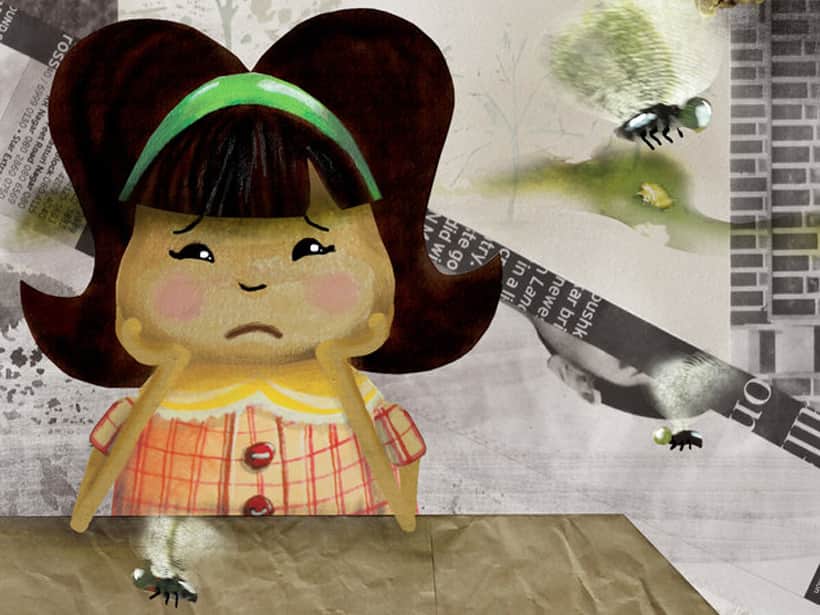 Cheekoo was the unhappiest girl among her friends.

She was certainly the unhappiest girl in her entire class.

She was perhaps the unhappiest girl in the world. 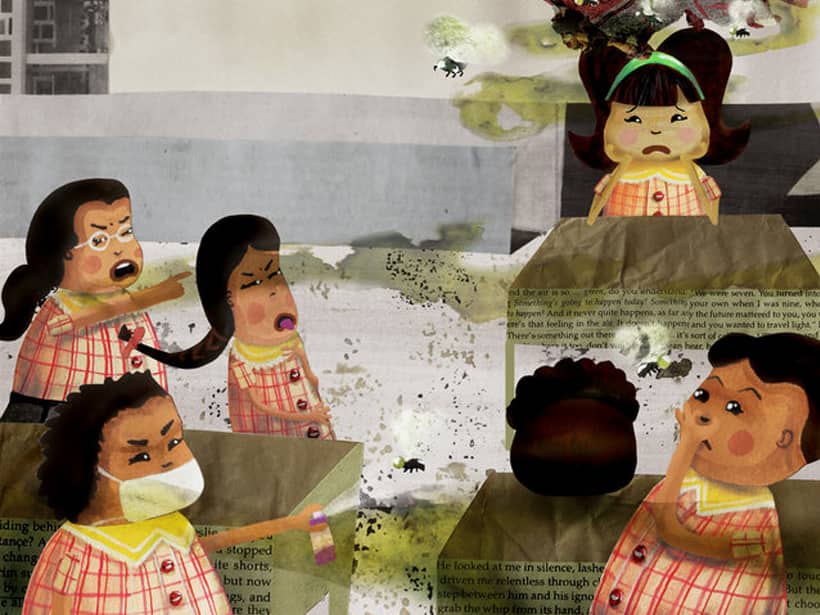 Friends? Cheekoo had no friends anymore.

No one wanted to play with Cheekoo.

Because she had a cloud hanging over her head.

A cloud of TRASH. 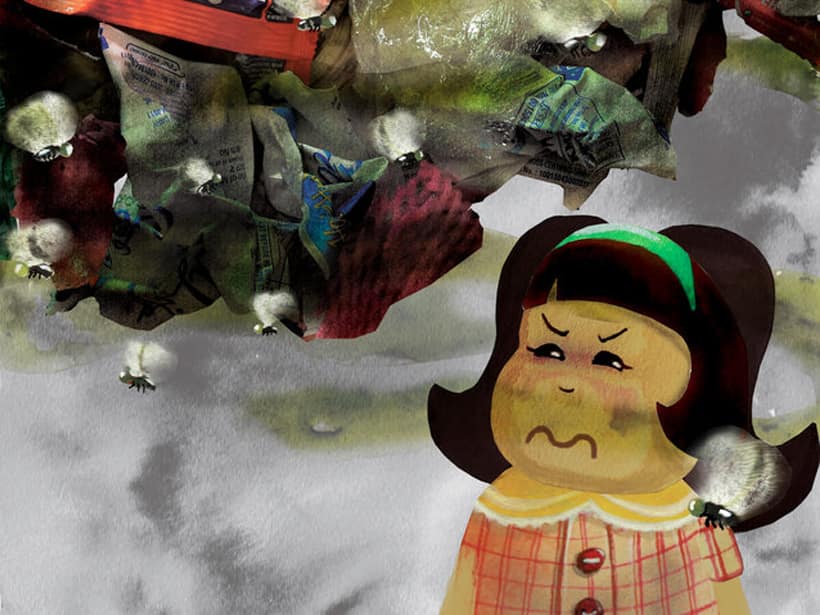 All surrounded by a swarm of buzzing flies. No one wanted to play with a girl who had a cloud of trash hanging over her.

What if a rotten banana peel fell on your head? YUCK!

The cloud would always give her away. “Let’s walk to school together,” she said to Sona.

Sona ran off in the opposite direction.

“May I borrow your pencil sharpener?” she asked Sweety. Sweety made a face and changed her seat to go sit with Asha.

Cheekoo even had to eat her lunch alone.

Cheekoo knew that she should have listened to her Amma. Amma always told her not to litter. 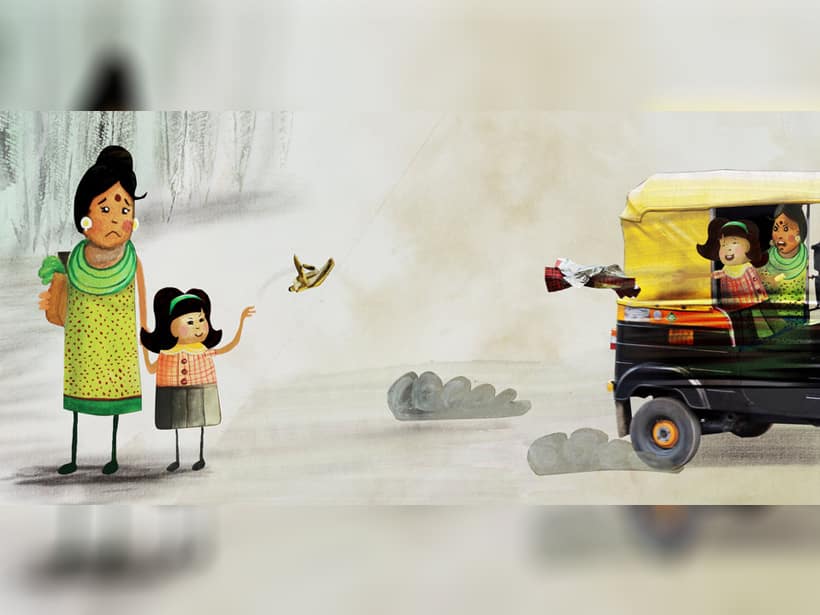 “Don’t throw the banana peel on the road!”

“Throw the empty biscuit packet in the dustbin.”

But Cheekoo never listened. She only laughed and kept littering. Then one day, Amma became very angry. “Soon, all this trash will start following you!” she said.

The next morning, Cheekoo woke up to a foul smell and the sound of buzzing flies. The cloud of trash was hanging over her head.

Amma’s words had come true! And then, Cheekoo was unable to laugh.

Cheekoo tried to run away.

But the trash cloud followed her everywhere.

Cheekoo took a broom to sweep the cloud down.

But the trash could not be swept away.

She screamed and asked the cloud to leave her alone. She even tried throwing the cloud into the dustbin.

But the cloud of trash just wouldn’t go. So Cheekoo became very unhappy. 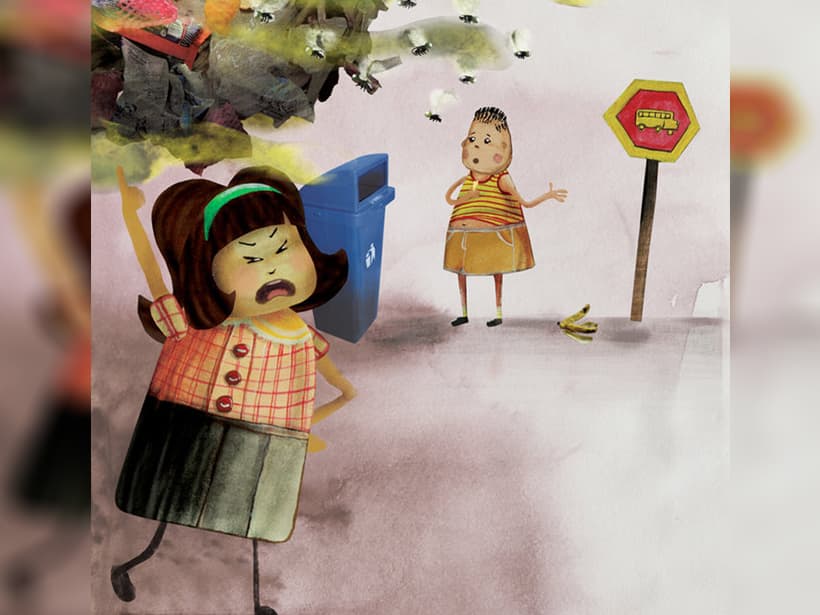 Cheekoo saw Bala throwing a banana peel on the road.

Cheekoo was annoyed. Could he not see the cloud over her head?

“Oye silly boy!” she yelled. “Don’t throw the peel on the road. Someone will slip!”

Bala, scared of the trash cloud, threw the peel in the dustbin.

The next day, the trash cloud had become smaller! “How did that happen?” Cheekoo wondered.

“Aunty!” Cheekoo said. “Please pick up these bags and reuse them.”

Reema Aunty picked up the bags and left.

The next day when Cheekoo woke up, the cloud was much smaller.

Cheekoo smiled. She knew what she had to do. When someone threw away a biscuit packet or pencil shavings, Cheekoo stopped them.

She picked up every twisted plastic bottle and put it in the dustbin.

The village became cleaner and cleaner. And Cheekoo’s cloud became smaller and smaller.

Until one day, it was gone.

Cheekoo was now perhaps the happiest girl in the world. Secretly, she liked living in a clean village.

But she was also scared that the trash cloud would come back, some day. Ever wondered what happens to trash once you throw it away? No, it doesn’t become a cloud on your head. The trash ends up in a big garbage bin near your home.

When you litter, the trash collects by the side of the road. Some of it goes into the drains that carry waste water from your house. This clogs the drains and attracts flies which spread nasty diseases! UGH! Nobody likes living in a dirty environment. Ask Cheekoo. 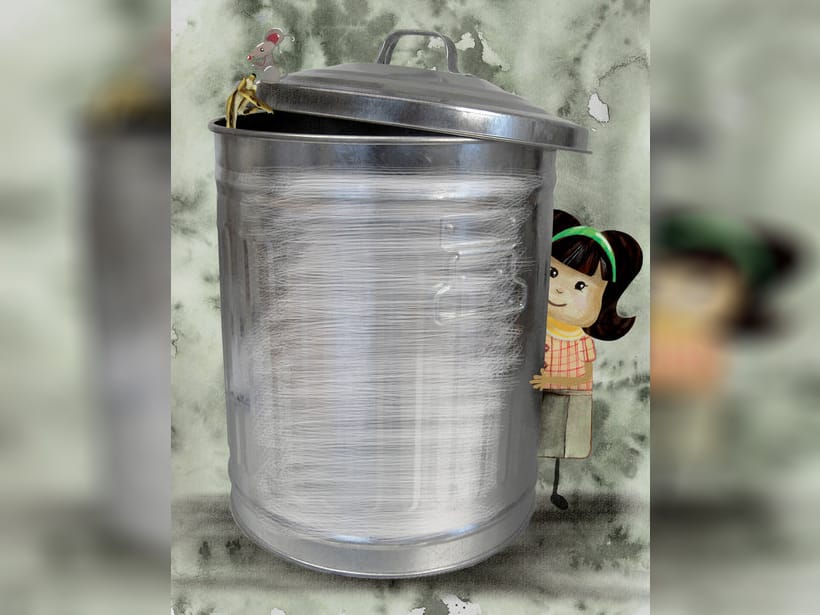 Here’s how NOT to make a cloud of trash

– We can start by not littering our surroundings.

– Always, always throw waste into a dustbin – look around for the nearest one.

– After you eat a banana, don’t throw it on the road. Put the peel in a small bag until you find a dustbin.

– There are many things that you may think are useless, like the paper bag into which you put the peel. But not everything is waste. So don’t throw the bag with the peel! Take it home and reuse it.

– Cover dustbins so that flies can’t get inside.