A science teacher explains: Why do birds fly south for the winters?

While passing over the continents, birds run over a gauntlet of dangers both natural and manmade like brutal wind, seasonal storms, and predators, says Rachna Arora 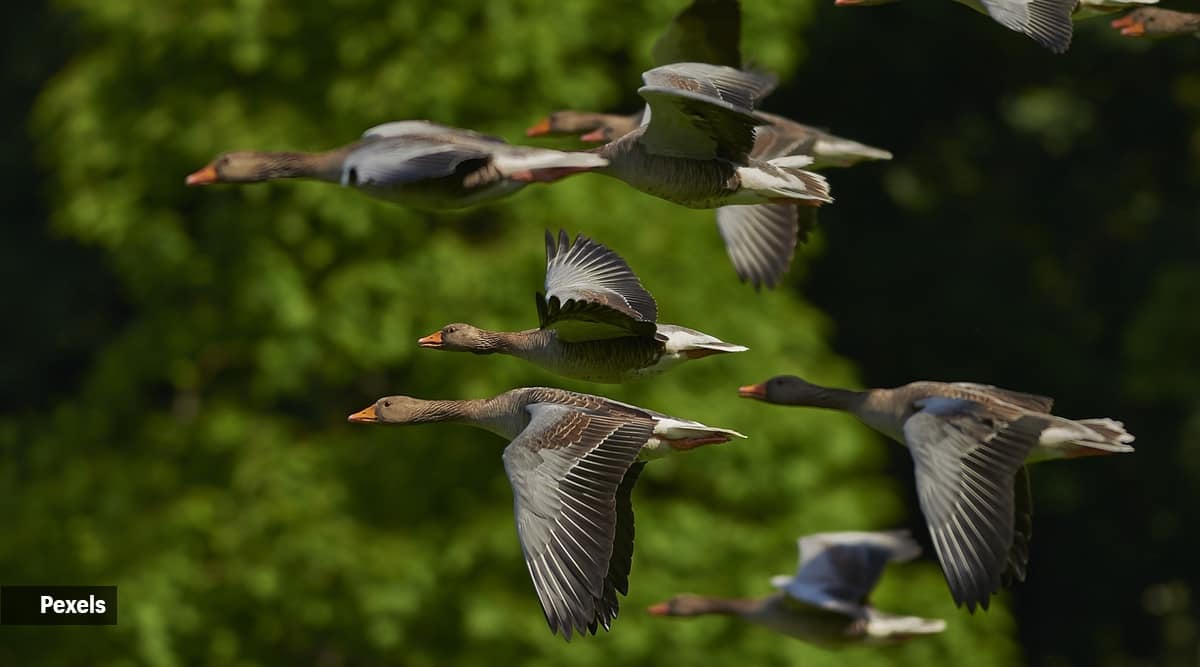 Migratory birds on their journey are a sight to behold. (Source: Pexels)

At the onset of winters, the spectacle of birds flying across the skies in the famous ‘V’ or a ‘J’ formation is an enchanting sight to behold. This is a classic picture of their annual migration between breeding summer homes and non-breeding winter grounds with about 40 percent of the total avian population being regular migrants. Diminishing resources, essentially food and nesting locations, is among the key propellants of their migration to areas of abundance.

ALSO READ |Plan to buy toys for your kids? Here are a few practical tips for safety hazards

With approaching winters coupled with shrinking availability of insects and other food, the birds nesting in the north move towards the south that offer relatively comfortable tropical climes. They embark on the return journey five to six months later when the budding insect population becomes abundant in the nesting locations of their first home. In the southern hemisphere the birds fly north to escape harsh weather and spend winters in the warmer climates. Dramatic physical changes in their body precedes the commencement of a long and arduous voyage. This preparatory phase coincides with birds entering the stage of hyperphagia during which their hormone levels compel them to drastically increase their body weight thus building up body fat. In the run-up to the migration marathon, they fuel up on certain foods, double up their body weight, strengthen their breast and heart muscles coupled with shrinking of weight bearing organs like stomach, intestines and liver.

The pertinent question is how do birds know when, where and for how long to travel and maintain their sense of direction as they fly? As per a widely believed and popular theory, the shortening length of the day acts as an ecological trigger to prepare for migration with the sun acting as a natural guide to navigate around the earth. Experiments have revealed that aided by their internal clock, birds can compensate for the time of day, latitude and figure out which direction to fly even amid a change in seasons. Some nocturnal birds prefer to travel in the night as winds are relatively stable, which saves energy. Also with fewer predators to worry about and star patterns guiding their navigation, they can travel unhindered towards their terminus.

While humans use magnetic compasses all the time, the birds too can use the earth’s magnetic field to navigate their way. Although still unclear, there is evidence to support that the birds can sense the earth’s magnetic field through sensors in their beak and ears including their ability to see the magnetic field, referred to as vision-based magnetoreception. Experimental evidence confirms that birds can navigate perfectly without the left eye while the right eye is indispensable to their sense of flight direction. The magnetic field induced reaction in the bird’s right eye to the light waves lends visibility to the magnetic field as patterns and direction for their movement. This profound interpretation works on the established principle of quantum entanglement.

Another school of thought is that the birds are born with the inherited memory of their ancestors imprinted in their DNA and thus have an innate set of migration instructions. This is corroborated by juvenile birds making their first migration without any help from their seniors.

Natural bodies like rivers, mountains and forests and now, roads often serve as vibrant landmarks to find their way along a migration route. Also smell provide olfactory cues to discover and follow migration routes in many instances.

Migration is a strenuous activity. While passing over the continents, birds run over a gauntlet of dangers both natural and manmade like brutal wind, seasonal storms, and predators. Daunted by pesticide ingestion in rural areas or collusion with urban structures like tall reflective glass buildings, a large population is unable to return to their breeding grounds.

Such astounding losses besides depriving us of the beautiful colors and melodious songs pose a threat to ecosystem balance as birds aid in insect control, pollination and dispersing seeds.

ALSO READ |How has the pandemic affected your child’s social development?

Creation of more green spaces, hanging feeders and building bird houses can provide an enabling environment for the sky travelers to reach their destination safely and return year after year.

Truly, the Sanskrit phrase “Atithi Devo Bhava” (A guest is equal to God)” shall go a long way in serving this cause!

(The writer is PGT- Physics at Shiv Nadar School, Noida.)