Can exercise prevent diabetes in children?

Over time, diabetes can damage the heart, blood vessels, eyes, kidneys and even cause early death. So, what could be the ideal way to keep diabetes at bay in children? Exercise and a healthy diet can prevent diabetes in children. (Source: Getty Images)

On World Diabetes Day 2018, let’s look at how exercise can help prevent diabetes in children.

Our unhealthy and sedentary lifestyles have made us more prone to diabetes. And that’s not just restricted to adults. Children are now at an increased risk of developing diabetes too. While higher number of cases of type 1 diabetes in young children have been recorded, type 2 diabetes is also being increasingly reported among children, according to WHO. And that’s mainly because of excess bodyweight and physical inactivity, leading to childhood obesity.

Over time, diabetes can damage the heart, blood vessels, eyes, kidneys and even cause early death. So, what could be the ideal way to keep diabetes at bay in children? Exercise and a healthy diet, endocrinologist Dr Rakesh Prasad told Express Parenting. “Exercise is an integral part of diabetes management and is effective right from the early years,” he said. How can exercise prevent diabetes?

Diabetes is essentially a lifestyle disorder. And the two major components to regulate that is diet comprising minimum carbohydrate and exercise of 30 minutes per day, for a minimum of five days a week, advised Dr Prasad.

Exercise prevents excess weight gain. A study published in The New England Journal of Medicine showed how obesity in children in India had doubled from 1.3 per cent in 1980 to three per cent in 2015.

Again, it also increases muscle mass, which reduces the chances of insulin resistance substantially. “There are a lot of studies and data, whereby only diet and exercise were used to determine whether it can prevent diabetes or not. It was found that only 30 minutes of exercise along with a healthy diet can prevent all types of diabetes,” Dr Prasad added. 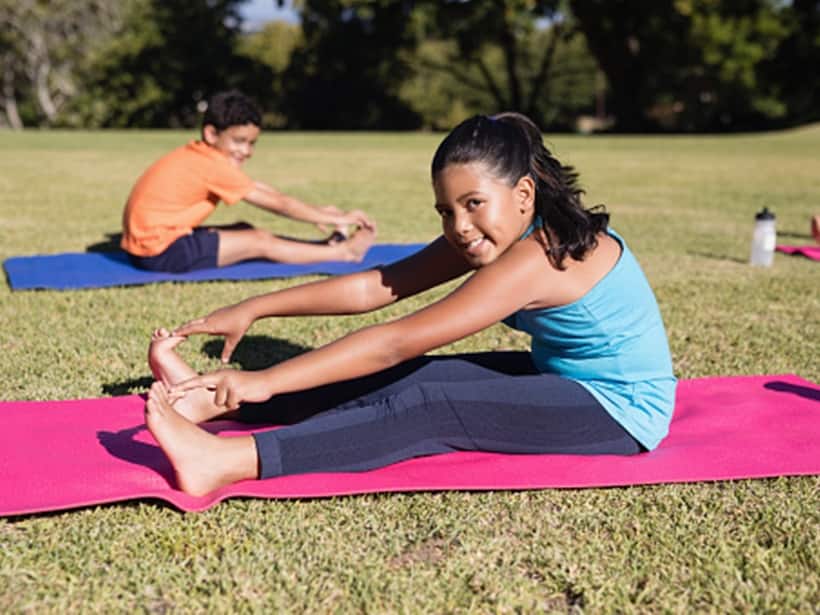 But why are children reluctant to exercise or even play? Dr Prasad explained, “More number of children are at a risk of developing diabetes today because they hardly find time to play and exercise as they are overloaded with studies and other activities. Academic competition adds to the stress, which puts the child at the risk of developing diabetes as an adult. Secondly, only limited space is available for children to play or take part in any physical activity.” Besides, with increasing dependence on technology, most children tend to spend a lot of time on mobile phones, laptops or in front of the television set.

How to get your kids to exercise

With increase in screen time apart from the hectic routine that most children have, not many are motivated enough to exercise. So, how can you ensure your kids learn to stay fit through exercise? Here are some tips:

Get rid of your fear

Even if your children are not motivated to exercise, at least allow them to play. Some parents, however, are scared of allowing their children to play, fearing they would get injured or be exposed to germs or that it might interfere in their child’s academic schedule. “The first and foremost thing to do is to let go of the fear. Only then can you encourage your child to exercise or play. Play is a child’s work. Children usually want to play, which, in turn, helps them explore their physical and mental capabilities. Getting injured is a part of discovering your body,” Dr Debmita Dutta, parenting consultant and founder of What Parents Ask, told Express Parenting.

Lead an active life yourself

In families in which the parents are active and enthusiastic about going hiking or climbing or cycling for instance, children would invariably follow suit, said Dr Dutta.

Children learn a lot from imitation. So, the best way to encourage your kid to exercise is by doing it yourself. And that’s exactly what fitness coach Sagar Diwan follows. “My four-year-old kid has seen me working out and now, he can do skipping, jump over hurdles, and do cartwheel, among other activities. We don’t watch too much television or be on the mobile in front of our son. It is very important to become the role model for your kid and encourage him or her to copy you,” he said.

Kids tend to pick up what they see…start early and try to set a good example.
Great parenting. Active kids. #FitIndia pic.twitter.com/4ntCO7ZLLT

Make sure your child enjoys the activity

Pushing the child to do one kind of physical activity can become too boring, and having some variety always helps. “Ask the child what he or she wants to learn and then encourage to persistently practice it for a few months. Only then he or she might start liking the activity. Any activity will be difficult initially. It is our job to help the child overcome the difficulty to reach a stage where it is effortless and enjoyable,” said Dr Dutta. And Diwan agreed. “When children find fun in an activity (like presenting it in the form of a game) they will do it again and again,” he added.

Group activities can be a great booster. Diwan explained, “Doing an exercise or an activity in a group attracts a kid a lot more than doing it alone. The kid will actively participate if he or she does it with those of the same age group.”

nstead of pushing children to be the best at everything, it is essential to encourage your child to be at least physically active. “One needs to motivate the child; competition, if any, should be healthy. Rewarding your child for his or her effort also works in most situations. Just a high-five or a note of encouragement can surely work,” Diwan asserted.