Why India should let the Rupee fall

In 2016, the RBI had been given a new mandate to meet its inflation target and maintain growth. Defending the currency at all costs isn’t part of the brief. This latest weakness will test its resolve. 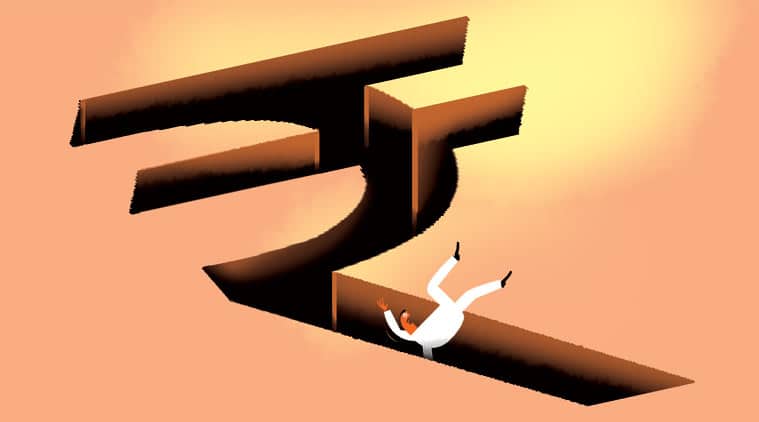 Some of the loudest complaints have come from companies fretting about the likely impact currency depreciation will have on corporate balance sheets. (Illustration: CR Sasikumar)

The Indian rupee has been sliding against the U.S. dollar in recent days as emerging markets come under pressure. That’s made the currency one of Asia’s worst performers, losing 12 percent this year.

The rupee’s latest moves have sparked a debate in India. The Reserve Bank’s stated policy is to reduce volatility, rather than target a specific level for the currency. Should the RBI intervene to strengthen the rupee? If so, what precisely should it do and what would the impact be?

A number of factors are pressuring officials to act — not least among them, that the rupee has become both a badge of national pride and a tool of political brinkmanship. But so far the government and the RBI have been unruffled by the fear-mongering. They shouldn’t lose their nerve.

Some of the loudest complaints have come from companies fretting about the likely impact currency depreciation will have on corporate balance sheets. Those who bet the RBI would step in when faced with depreciation pressure borrowed heavily in international markets. Yet India’s currency-derivative markets, with many restrictions and limited liquidity, make hedging quite expensive, so these companies are now exposed.

Another pressure point is the price of oil, which quickly becomes a matter of unhappiness among the middle class. India imports about 80 percent of its petroleum needs, a factor only complicated by the country’s exorbitant domestic taxes on fuel — almost 100 percent on gasoline and 60 percent to 70 percent on diesel. This means that when the rupee depreciates, the exchange-rate pass through to fuel prices and, as a result, the rest of the economy, is high.

The RBI does have a number of instruments it can use to support the currency. The most obvious is to intervene in foreign-exchange markets by selling dollars: The central bank has more than $400 billion in reserves at its disposal. Alternatively, it could raise interest rates, a move justified by the currency weakness, higher oil prices and the latest above-target inflation data. Third, it could raise dollars by borrowing from non-resident Indians, which has become a go-to in times of currency stress.

The RBI has used these instruments in the past — and the results haven’t been pretty. The central bank moved to prevent rupee depreciation in May 2013, after then-Federal Reserve Chairman Ben Bernanke’s taper talk. Intervention continued through September, as pressure continued to mount on emerging-market currencies. The result? The rupee fared worse than all other emerging-market currencies.

Every move — from tightening liquidity and raising interest rates to the discussion of non-resident borrowing and restrictions on derivatives — was interpreted as a panic reaction that only confirmed the rupee was under pressure. Foreigners felt it was better to take money out of India sooner rather than later, and the fall of the rupee became a self-fulfilling prophecy. Currency and derivatives markets, money and credit markets, and high costs of borrowing all hurt the economy in subsequent months.

In the years that followed, the RBI continued to manage the rupee carefully. It mostly achieved this by reducing the size of the rupee-dollar derivatives market, which made its intervention more effective and then buying rupees forward.

To some extent, the approach worked: Currency volatility settled. While the real exchange rate of the rupee appreciated, the currency didn’t weaken in line with India’s higher inflation. Yet some could argue this merely set the stage for the current rout, which can be seen more as an overdue recalibration than a flash in the pan.

To be sure, there are some segments of the economy that gain from rupee depreciation. A weaker currency helps export growth, which has been weak in recent years. Companies — many of which are small and labor-intensive — have struggled with the transition to a goods and services tax, and several have had a hard time getting credit. A weaker rupee would also offset competition of cheap imports from countries like China, which could give domestic industries a much-needed boost.

The RBI and India’s government, at present, are calm. This is a strong posture that must withstand the daily news, media pressure, lobbying and political taunting. In 2016, the RBI had been given a new mandate to meet its inflation target and maintain growth. Defending the currency at all costs isn’t part of the brief. This latest weakness will test its resolve.